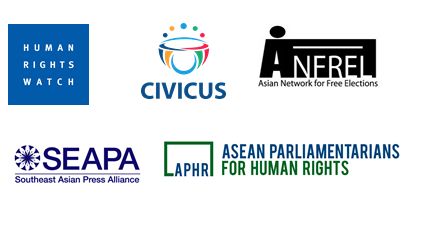 Cambodian authorities should immediately drop politically motivated bribery charges against five human rights defenders known as the ADHOC 5 (“FreeThe5KH” in social media campaigns), five international organizations said today. The trial of the five – four current and one former senior staff members of the nongovernmental Cambodian Human Rights and Development Association (ADHOC) – is scheduled for August 27, 2018, after lying dormant for a year. If convicted, each faces between 5 and 10 years in prison.

“The ADHOC 5 case is emblematic of the absurd legal harassment that activists and human rights defenders face fighting for justice and human rights in Cambodia,” said Phil Robertson, deputy Asia director at Human Rights Watch. “The Cambodian government, having returned the country to a one-party state, now seems intent on destroying civil society.”

On April 28, 2016, the Anti-Corruption Unit detained Nay Vanda, Ny Sokha, Yi Soksan, Lim Mony, and Ny Chakrya on allegations that the former four had “bribed a witness” (article 548 of the Criminal Code) and Ny Chakrya had assisted as an accomplice (articles 28 and 548). Observers, diplomats, and activists view the case as politically motivated, since it is related to ADHOC’s provision of legal and other assistance to Khem Chandaraty (also known as Srey Mom), an alleged mistress of the opposition political leader Kem Sokha. Khem Chandaraty was at the time pressured by government investigators to act as a witness against Kem Sokha, and her testimony was eventually instrumental in the “prostitution” case against Kem Sokha that resulted in his spending six months under de-facto house arrest in 2016.

The investigating judge of the Phnom Penh Municipal Court subjected the five human rights defenders to pre-trial detention that lasted 427 days, until he released them on bail and decided to send the case to trial on June 29, 2017.

Ny Chakrya was in February 2016 appointed as deputy secretary-general of Cambodia’s National Election Committee. His year-long pre-trial detention, however, prevented him from fulfilling his mandate as a non-partisan auditor of electoral irregularities during the June 2017 commune council elections. Ny Chakrya also faces spurious defamation charges in separate case, which could lead to a six-month prison sentence if he is found guilty.

In mid-August, the Phnom Penh Municipal Court issued summonses for three of the five to appear for the start of their trial on Monday 27 August.

“This case is just the tip of the iceberg in Cambodia, where being a human rights defender comes at a high cost,” said Charles Santiago, Chairperson of ASEAN Parliamentarians for Human Rights and an MP from Malaysia. “The authorities should immediately end their systematic attempts to silence activists and civil society.”

The ADHOC 5 case has drawn widespread international condemnation. In April 2017, the group was also nominated as one of three finalists for the prestigious Martin Ennals Award, known as the “Nobel Prize for human rights defenders.”

In 2016, the United Nations Working Group on Arbitrary Detention declared the five’s pre-trial detention arbitrary in a landmark opinion that for the first time referred to human rights defenders as a protected group. The Working Group ruled that the five were “discriminated against based on their status as human rights defenders, and in violation of their right to equality before the law and equal protection of the law under article 26 of the ICCPR [International Covenant on Civil and Political Rights].” The Working Group continued that the five had “rights to offer and provide professionally qualified legal assistance and other relevant advice and assistance in defending human rights.”

Article 12 of the UN Declaration on Human Rights Defenders provides that governments shall take all necessary measures to ensure the protection for human rights defenders against “any violence, threats, retaliation, de facto or de jure adverse discrimination, pressure or any other arbitrary actions” related to their efforts to protect and promote human rights and fundamental freedoms.

The case against the ADHOC 5 violates their rights to freedom of expression, association, and peaceful assembly, protected under the ICCPR, to which Cambodia is a party. These rights are also contained in Cambodia’s constitution.

The charges against the ADHOC 5 come amid a wider crackdown on dissent in Cambodia, the organizations said. In recent years, Prime Minister Hun Sen and his ruling Cambodian People’s Party (CPP) have launched a sweeping assault on real and perceived critics of the government. Journalists, human rights defenders, opposition politicians and activists are among those who have been targeted, harassed and jailed for nothing but the peaceful exercise of their human rights.

“The Cambodian authorities must ensure that civil society organizations are able to carry out their legitimate activities without fear or undue hindrance, obstruction or judicial harassment. This includes removing legal and policy measures that unjustifiably limit the right to freedom of expression and association,” said David Kode from CIVICUS.

Earlier this week, prominent land rights activist Tep Vanny and two former Radio Free Asia journalists, Uon Chhin and Yeang Sothearin, were released from prison. Tep Vanny received a royal pardon for two convictions related to her peaceful activism. Uon Chhin and Yeang Sothearin were released on bail after spending 280 days in pre-trial detention on spurious espionage and pornography charges, which have not been dropped.

The following organisations have supported this statement: