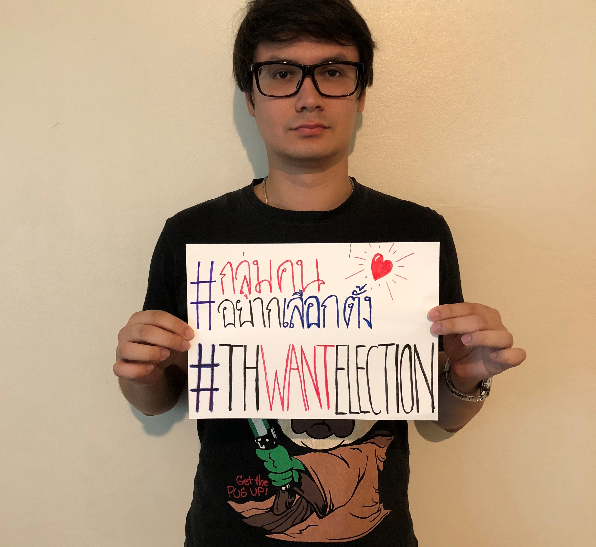 Ahead of the publication of the 2018 State of Civil Society Report on the theme of ‘Reimagining Democracy’, we are interviewing civil society activists and leaders about their work to promote democratic governance, the challenges they encounter in doing so, and the victories they score. CIVICUS speaks to Rangsiman Rome, co-founder of the Democracy Restoration Group, a Thai civil society organisation seeking to restore faith in democratic processes, particularly among young people, and promote accountable and responsive democratic institutions.

1. It has been four years since the military coup. Can you tell us about its impact on human rights and democracy in Thailand?

In 2014 a coup d’état put an end to democracy in Thailand. During these four years of military rule, violations of human rights and civil freedoms have been widespread and systematic. The freedoms of expression and assembly are severely repressed, and exercising them has resulted in arbitrary arrest, prosecution and punishment. Many pro-democracy activists have been charged in multiple criminal cases for their protest actions and expressions of dissent.

According to a report issued in May 2018 by Thai Lawyers for Human Rights, a civil society organisation (CSO), the military summoned 1,138 people to coerce them into changing their attitude towards the military government. At least 264 events organised by citizens were cancelled by the military and 2,408 civilians were prosecuted in military courts. At least 18 people were tortured by military personnel while under arrest.

Additionally, while Thai citizens are punished for criticising the state, the junta-led government is freely promoting a set of openly pro-authoritarian, anti-democratic values known as ‘the 12 Thai Values’, targeted at schoolchildren and applied in all of the formal education system. Under these conditions, democracy now seems more unattainable than ever.

2. Have CSOs been able to continue to operate in this context? What challenges are they facing?

The situation for civil society is terrible. Violations of human rights and fundamental freedoms continue to occur on a daily basis. For example, the authorities have prosecuted the ‘We Walk’ march leaders for arranging a political protest; harassed student activists by sending police and military officers to follow them to their universities and residences; and detained activists who were carrying out an anti-corruption event targeted at the deputy prime minister, General Prawit Wongsuwan.

Other violations have included a ban and restrictions on activities organised by labour groups on Labour Day; disruptions of seminars at Payao University and Maha Sarakham University; and the detention of leaders of a land rights advocacy group, the People's Movement for Just Society (P-Move), to prevent them from joining the ‘Reduce Disparity, Return Justice and Protect Community’ rally in front of Government House in May 2018.

Further, members of the People Who Want Elections movement, who have stood against the junta’s attempts to prolong its power and postpone elections, have been harassed repeatedly by government officials. Many have been prosecuted as a result of orders issued by the National Council for Peace and Order (NCPO), as the junta calls itself. One of the main legal provisions used against protesters has been Article 12 of order No. 3/2015, which criminalises political gatherings of five or more persons, an offence punishable with up to six months’ imprisonment, and Article 116 of the Criminal Code on sedition. So far, 136 people have been prosecuted under these laws.

3. Can you tell us more about yourself and the pro-democracy movement that you are a part of?

I’m the co-founder of the Democracy Restoration Group (DRG). We are an activist group that seeks to restore faith in democracy in Thailand through cultural normalisation, so that Thai people perceive democracy as part of Thai culture and identity. In order to bring democracy back to Thailand we seek to instil the value of representation in Thai people, and to raise a young generation that believes in democracy, which is fundamental for a democratic society to function. We want to build a civil political organisation operating in parallel with the parliamentary system and filling the gaps of representative democracy.

Our work is focused on elections. The DRG is a member of the People Who Want Elections movement, positioned on the frontline of the struggle for democracy. We have organised demonstrations and mobilised people to pressure the military government into keeping their promise to hold elections in November 2018. We believe that an election could be a major milestone in bringing democracy back to Thailand. I think that before the protest we held in May 2018, the military government had decided not to fulfil their promise to hold elections in November 2018. But after our campaign, they committed to holding elections in February 2019. I don’t think they will be able to postpone the elections much longer.

4. Have you faced retaliation for your pro-democracy activism?

For my involvement in the pro-democracy movement I have been detained in a military camp and sent to prison. I am currently being prosecuted by both military and civil courts.

On 22 May 2018, the fourth anniversary of the military coup, hundreds of protesters took to the streets to call for elections. Sixty-two of them, including myself, have been charged with violating the NCPO’s orders. They are using against us Article 12 of order No. 3/2015, articles 215 and 216 of the Criminal Code, and the Road Traffic Act. Forty-one of us have been charged with offences carrying maximum sentences of three years in prison. But the 21 remaining ones, including myself, have also been charged under Article 116 of the Criminal Code, on sedition, and face six charges under the Public Assembly Act. For all these charges, seven years’ imprisonment is the maximum sentence that the courts can impose.

5. Is Thai society politically polarised? What are people’s attitudes towards the military junta, and how does this affect the prospects for elections?

Thailand’s crisis actually began in 2006, when a military coup removed an elected Prime Minister, Thaksin Shinawatra, who was extremely popular among many people but was loathed by the elites and the establishment. Many Thai citizens also detested Thaksin because they believed that he wanted to turn the country into a republic and because he was involved in massive corruption. Therefore, a lot of people supported the coup as well, even if it meant losing basic rights. This is the same force that has kept the junta in power for the past four years.

In fact, one of the major objectives of the junta in launching the 2014 coup was to eradicate the so-called ‘Thaksin Network’ - the network of politicians connected to Thaksin - from the Thai political scene. They sought to abolish his legacy and replace it with their own legacy through various national strategies, reforms and mega projects, such as ‘Thailand 4.0’, a development programme seeking the digital transformation of the economy, and the Eastern Economic Corridor (EEC), a development plan meant to spur investment in infrastructure in three eastern provinces, including a high-speed train built in partnership with China.

The junta however has failed to gain support from Thaksin’s supporters. Therefore, it is using every trick in the book to postpone the elections, be it by holding public surveys or by using threats against peace and security as an excuse. The junta will not step down from power if it is not pressured effectively by the people or is not ordered to do so by the new monarch, who succeeded his father in late 2016. But those who would have the power to force them to step down would prefer for the junta to remain in power long enough to make sure Thaksin’s legacy is erased.

If at some point the junta becomes unable to keep postponing elections any longer, it will seek guarantees that if it steps down from power it will not face prosecution. The military will negotiate with a potentially winning political party to ensure their impunity. It is highly possible that the political party they approach will accept their offer, and will not meddle with the junta’s legacy if they are not directly affected by it.

6. What can the international community do to support Thai civil society?

The international community should also undertake solidarity actions to pressure the Thai military government into dropping the charges against all those campaigning for elections.

7. What are your hopes for the future?

I hope there will be judicial, military, and bureaucratic reform, as these bodies have played a major role in obstructing the democratisation process. I also hope for a system of parliamentary democracy in which power is exercised for the benefit of the people and where minority voices are heard. Finally, I hope for empowered civil movements and networks. I believe that this can help thwart the abuse of authority, as well as create effective checks and balances mechanisms in the public sector.

For updates on civic space conditions in Thailand, see the CIVICUS Monitor.