CLIMATE CHANGE: Feminists have pushed for marginalised voices to be heard 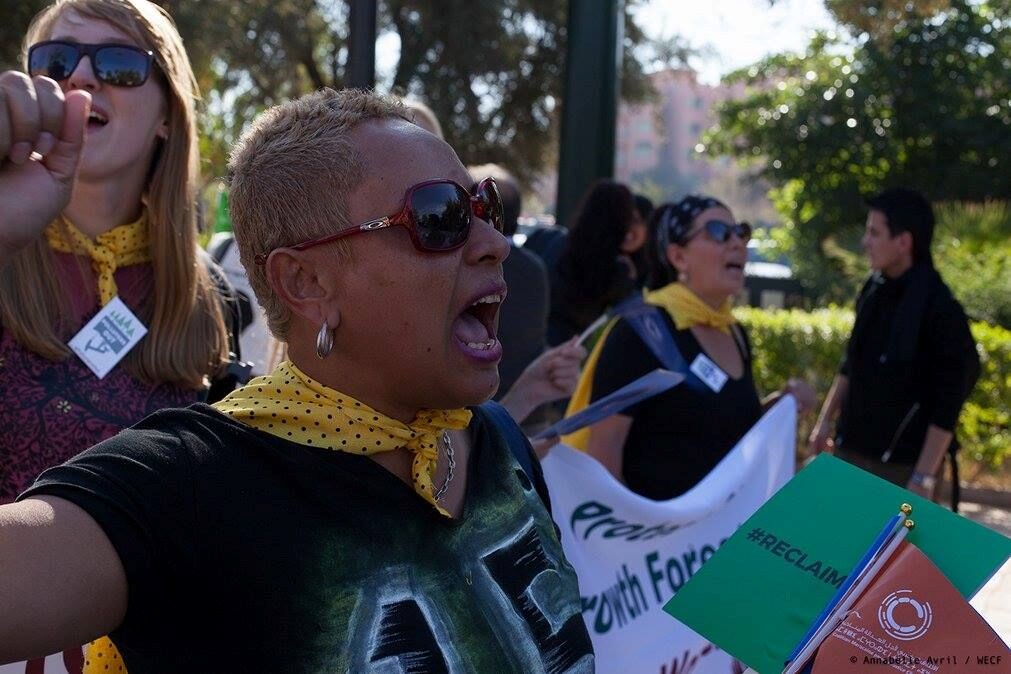 As calls grow for climate action to be more responsive to frontline communities, CIVICUS spoke to Maria Nailevu, a feminist climate activist from Fiji, about how feminists have been fighting for more inclusive climate policies from the local to the global levels. Nailevu says that United Nations (UN) climate negotiations often claim technical expertise as a reason to exclude diverse voices, but fail to recognise the specific expertise of women, LGBTQI people, people with disabilities, sex workers, rural and remote communities and young people in responding to the climate crisis in inclusive ways.

As a Fijian climate activist and a feminist, how inclusive of the needs of women, LGBTQI people and other excluded people have you found regional and national climate responses?

There is still a lot of work needed in terms of inclusiveness within our national and regional climate responses. There are still many key consultation processes that continue to exclude diverse voices that matter – those of women, LGBTQI people, people with disabilities, sex workers, people from rural and remote communities and young people, among others. Also, disaster responses still need to be more inclusive to ensure that all people, regardless of their race, sexuality, or background, have fair access to disaster assistance. After Cyclone Winston in 2016, one of the gaps identified within our disaster risk reduction work was that many marginalised communities were left out from accessing government assistance because it was designed only for traditional family structures. Only men as heads of households received the assistance on behalf of their families, which excluded many people who were already living on or below the poverty line and left them on their own to recover at their own cost.

Additionally, evacuation centres are not safe for women, girls and LGBTQI people. There have been reports of many human rights violations that arose during the evacuation period. We have also documented cases of LGBTQI people who were willing to risk their lives in temporary shelters because of fear of violence and discrimination at evacuation centres.

The 2017 climate change Conference of Parties (COP 23) hosted by Fiji emphasised the need for dialogue through the distinct Fijian process of talanoa – a form of inclusive, participatory and transparent dialogue. What do you think decision-makers can learn from talanoa in terms of listening to diverse perspectives?

I was fortunate to be part of the Talanoa Dialogue in 2017, when I was with DIVA for Equality representing the voices of lesbian, bisexual and transmasculine (LBT) women as well as women from rural, maritime and urban poor communities. As a grassroots feminist, climate activist and a woman holding diverse identities, I personally felt that it was a wonderfully designed platform because of the opportunity it provided for diverse voices to have a direct say in the process. I think decision-makers should create and support more inclusive and safe spaces that encourage the expression of diverse perspectives and shift away from tokenism and the focus on technical capacities.

Do you think the voices of diverse groups, and particularly of young people, have been heard in climate decision-making in Fiji?

Having the voice of young people heard has been a continuous challenge. However, in my feminist and climate justice work I feel that there are now spaces slowly opening up for young people and other marginalised voices. This has happened as a result of the continuous push by the feminist movement, and especially by DIVA for Equality, which has been doing great work in connecting direct voices that matter with key spaces.

I also personally feel that if youth spaces are shrinking, young people have the potential to shift that around by being radical and starting to implement actions rather than staying frustrated at decision-makers and our failing system. Young people can easily organise and act through community activities – such as planting trees, doing clean-up campaigns and conducting awareness drives – so that true work and commitment become visible, which can capture the attention of our leaders and reflect on existing processes.

Greta Thunberg is a great example of the younger generation having enough and speaking up to our failing system. Look at her now: she not only has the attention of our leaders, but also got international attention. The beauty behind this revolution is that it all started with Greta taking a day off school in 2018 to go sit and outside the Swedish parliament to call for stronger action on global warming. It was just her, on her own, holding up a sign that said, ‘School strike for climate’.

From your experience, do regional and global climate talks offer meaningful opportunities for the participation of frontline communities? If not, how do you think these processes could be improved?

I find UN climate-related spaces complicated, and I’m sure it’s the same for any feminist and climate activist from the global south. This happens for a few reasons.

First, gender balance in government delegations has always been a challenge in COP spaces. There are times you need to speak to your national and regional government delegations and it’s difficult for women when almost the entire teams are male. Another related challenge is that delegation members themselves are not familiar with gender and human rights issues and their interlinking impacts on climate change. This becomes a barrier to our work and efforts to influence our national and regional positions.

Second, there are almost no spaces and proper support systems for women from the global south to have a direct influence in the process. For COP 23, DIVA for Equality organised side events for the first time. We brought in women from the Pacific and elsewhere in the global south to speak about challenges and strategies. This was a breakthrough, as it created a stronger network of women working on similar issues. We also hosted a side caucus so that we could all find ways to support each other during the intense two-week process, which was helpful for women who were participating for the first time and feeling completely lost and consumed in the process.

Third, technical aspects tend to be prioritised over the importance of diverse knowledge. There seems to be a prevailing narrative that when you are from the global south or from a marginalised community, you are nothing but a victim. This shifts the attention away from the creation of spaces for grassroots women and marginalised groups to have a direct voice, sharing their realities and their strategies in a way that decision-makers can hear and learn from. There are so many spaces for technical capacity-building but so few that recognise and focus on the types of expertise that diverse communities also bring. There are feminist and women-led initiatives and indigenous and traditional knowledge that should be prioritised and integrated within our key climate responses.

Finally, there is a permanent tension between global north and global south politics. It is always a challenge for feminists from the global north and global south to convene and work together. I have been engaging in all COP events through the Women and Gender Constituency and it’s tough work when there are women from such different backgrounds. There still needs to be a recognition that our contexts are different and climate change impacts differently on us, and there needs to be more practice around power negotiations and a clear understanding of the different positions and politics in the room.

How are people in Fiji mobilising for a more just and inclusive response to the climate crisis?

I will speak on this based on my previous work with DIVA for Equality, which is a radical and feminist organisation in Fiji that works on an intersectional and interlinkage approach within a strong universal human rights framework.

One of the ways in which DIVA addresses inclusive responses is by creating inclusive and safe spaces for all people. Every year, DIVA hosts national conventions for LBT women, feminist bootcamps and an event called the Fiji Women Defending Commons, which convenes rural, maritime and urban poor women who are already doing work on climate, gender and sustainable development.

These key spaces that DIVA creates bring in excluded communities to come together to learn, share, strategise and work towards building a stronger social movement that connects communities that are doing great work with little support, contributing towards the resilience of their communities. These convenings produce useful outcomes, including outcome documents and demands that are co-produced by participants and shared with all relevant stakeholders, including the government, so they hear directly from people and can act on it.

DIVA is modeling a great set of work which I hope others, and especially our national and regional bodies, can follow to ensure that all people are included in climate responses if they truly believe in the 'leave no one behind' statement.

What do you think about the recent climate strikes around the world and the UN response to them?

There is a unique and powerful aspect of this climate strike, perhaps because it evolved from Greta Thunberg, who I find special because of her diverse identities: she is young girl with autism and she is from an global north country but stood up and spoke out not only for herself but for millions of people, including us in Fiji and the Pacific, who are angry at our failing system and structures and scared of our uncertain future because of leaders who are prioritising thriving economies at the expense of community livelihoods and our environment.

I find this year's climate strike really impactful and strong. I think it's a sign that people are now aware of the realities of climate impacts; they now understand the facts and the science that are shared by climate scientists on the status of the planet and our entire ecosystems. People cannot stand by and watch our planet be destroyed and our entire human race wiped out.

I hope the UN sees the seriousness in the key messages shared through the climate strikes and also strongly recognises that we are now in a time of climate crisis, as we can see in the various disasters striking across the globe. This requires a radical shift if we truly want to save humankind, our planet and all living species.

I hope there will be more support for diverse representation, including within government delegations. I hope global north countries and corporations will commit to their responsibilities through climate finance to address loss and damage for the global south, stop coal production and markets and invest more in renewable energy and gender-just solutions. I hope the objectives within the Gender Action Plan are implemented, monitored and achieved. And I hope the priority of protecting the ocean and marine life will be scaled up, especially around the global issue of plastic reliance and pollution. This will have a direct impact on food security for us and future generations.

Civic space in Fiji is rated as ‘obstructed’ by the CIVICUS Monitor.