#UN75: ‘Human rights are at the centre of multilateral diplomacy’ 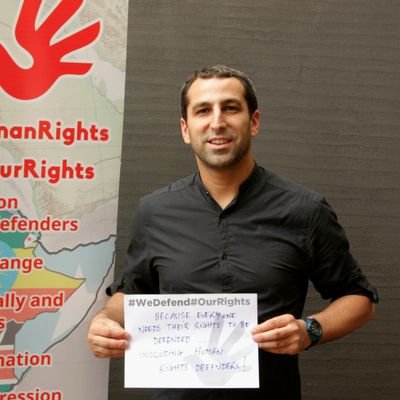 CIVICUS speaks to Nicolas Agostini, Representative to the United Nations of DefendDefenders, an organisation that promotes the work and safety of human rights defenders (HRDs) in the East and Horn of Africa – Burundi, Djibouti, Eritrea, Ethiopia, Kenya, Rwanda, Somalia/Somaliland, South Sudan, Sudan, Tanzania and Uganda. DefendDefenders provides emergency and legal support, protection grants and relocation programmes; helps build capacity in security and protection, digital safety, advocacy and communication, monitoring and reporting, human rights education and mental health and wellbeing; connects HRDs and civil society organisations (CSOs); raises awareness through research and analysis; and advocates for the protection of HRDs at the regional and international levels. A regional NGO, it is based in Kampala, Uganda and has a permanent office in Geneva, Switzerland.

In its first 75 years of existence, the UN has secured a great deal of achievements in the fields of peace, security and development. When it comes to its third pillar, human rights, I would say that the UN’s greatest success is the international community’s acceptance, at both the ideological and practical and policy levels, that human rights are not within the sphere of domestic affairs.

In other words, sovereignty cannot be used as a veil to prevent the international community from looking at the way a government treats its own people. This is immensely significant when you look back at history: states used to refuse to look at what was going on inside other states; they did so only when their own nationals or coreligionists were abused.

Governments like to claim that ‘pressure does not work’ and ‘naming and shaming’ does not bring about any results. A number of them praise ‘quiet diplomacy’ and ‘technical assistance and capacity-building’. Yet they spend time responding to criticism. They invest in the UN human rights system. They engage with the Human Rights Council and with the General Assembly’s Third Committee. They go through the Universal Periodic Review every four and a half years. They engage with special procedures (the ‘eyes and ears’ of the Council) and act on their communications – even when they do not publicly acknowledge so. They constantly interact with the Office of the UN High Commissioner for Human Rights (OHCHR). Most states ratified a large number of human rights instruments and are therefore subjected to periodic reviews by treaty bodies. Finally, states systematically reply to HRDs and CSOs that conduct investigations and advocacy, either openly and constructively, or, sadly, by exercising reprisals against them.

Further, it often goes overlooked that ‘quiet diplomacy’ and ‘technical assistance’ actually include substantial human rights elements. In 2019, DefendDefenders published a thorough analysis of the UN Human Rights Council’s ‘item 10’ resolutions on advisory services, which showed that human rights scrutiny is part and parcel of item 10, contrary to received wisdom and the narrative propagated by authoritarian states.

In 2019, as an instance in which the UN made a difference, I could cite the fact that sitting members of the Human Rights Council were subjected to more, not less, scrutiny. In July 2019, for the first time, the Council adopted resolutions on the human rights situation in three of its sitting members – the Democratic Republic of the Congo, Eritrea and the Philippines – during the same session. This showed that Council membership does not shield you from scrutiny, and that election to the Council does not amount to an endorsement of your human rights record. At the same time, states that until recently believed they were outside the reach of coordinated multilateral condemnation – notably China and Saudi Arabia – were subjected to scrutiny through joint oral and written statements.

These developments were unimaginable prior to 1945. This remains true despite reason for concern in recent years, with increasingly direct attacks against multilateral institutions and the UN human rights system by authoritarians and populists.

Budget is always an issue for the UN’s human rights pillar. Compared to the peace and security and development pillars, it gets very little: the figure that is usually put forward is a mere three per cent of the overall UN budget.

This means that UN secretariat staff – OHCHR and human rights advisers in peace missions – and UN human rights bodies and mechanisms must work on a shoestring – and they achieve much! But the UN’s financial neglect for its human rights pillar also means that the UN system as a whole is facing a lack of policy consistency. Whereas the idea that development, peace and security, and human rights are interdependent and mutually reinforcing has brought about policy initiatives such as Human Rights Up Front, decision-makers have been backtracking. In fact, the UN’s human rights pillar has faced mounting budget cuts, forcing a number of bodies to prepare for reduced numbers of sessions and meetings.

Caving to pressure from China, Russia and the USA, UN Secretary-General António Guterres has since he assumed office betrayed efforts to mainstream human rights in all UN work. He has by and large buried Human Rights Up Front, and human rights components of peace operations are being eviscerated as a result of this pressure and budget cuts decided by members of the UN Security Council.

How is civil society reacting to this?

Civil society is pushing back at all levels, reminding the UN and states of their duties towards the human rights pillar. Civil society has relied on, and promoted, a human rights-based approach to issues of global concern, from migration to counter-terrorism to climate change.

Civil society’s very existence and its dynamism are also important insofar as they highlight that the current form of the state – which still relies, essentially, on a ‘Westphalian’ concept of territorial sovereignty – is recent in the history of mankind, and that it is contingent and somewhat arbitrary. Societies, including the international society, could be organised differently.

State representatives sometimes portray human rights advocacy CSOs as arrogant when the latter name and shame human rights abusers, but the existence of civil society and the role citizen movements play call for more modesty on the part of state officials. Governments – provided they result from free and fair elections – represent one form of legitimacy, but not the only form of legitimacy. Civil society was there before the Westphalian state, and it will probably be there after the latter is, as Michel Foucault would say, “erased like a face drawn in sand at the edge of the sea.”

I believe these elements are important to keep in mind when discussing how civil society is pushing for change.

What challenges have you faced in your own interactions with the UN system, and what have you achieved?

For a regional human rights CSO like DefendDefenders, challenges are many. They include financial resources, a shrinking civic space in some of the countries we work on, impunity for human rights violations and abuses, and the very nature of our work. Human rights are, and will always be, about challenging power and imposing restrictions on those exercising it, to prevent abuse.

We always focus on the quality and relevance of our work. We also build bridges with all stakeholders: governments (as human rights duty-bearers), international and regional institutions, fellow CSOs, communities, grassroots activists and individual HRDs, who in the East and Horn of Africa have been organising themselves in coalitions and networks.

In December 2019, DefendDefenders was involved in the launch of the Ethiopian Human Rights Defenders Coalition, something that was unthinkable two years ago when civic space in the country was closed. Any opportunity must be seized to build stronger human rights protections.

I will end with an anecdote. For years, Sudanese HRDs were insulted, intimidated, threatened, subject to surveillance, prevented from leaving their country and abused. In April 2019, through a peaceful revolution, Sudan’s people and civil society brought a 30-year dictatorship to an end. In July, Dr Nasredeen Abdulbari, an academic and HRD, was part of DefendDefenders’ delegation to the 41st session of the Human Rights Council. Together, we advocated for meaningful UN action on Sudan, put forward our proposals and met with stakeholders. Two months later, at the Council’s 42nd session, Dr Abdulbari led the Sudanese government’s delegation to Geneva. In the meantime, he had been appointed Minister of Justice and joined a transitional cabinet led by civil society figures and activists. This is certainly not the end of the story, but it shows that one should never lose hope.