#UN75: ‘Governments use the UN to sanitise their image before the international community’ 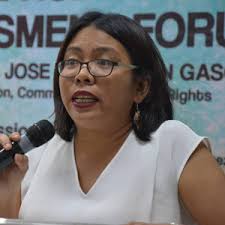 CIVICUS speaks to Cristina Palabay, Secretary General of the Karapatan Alliance Philippines, a national alliance of civil society organisations and activists working for the promotion and protection of human rights in the Philippines. Established in 1995, Karapatan has 16 regional chapters and includes more than 40 member organisations. It documents and denounces extrajudicial killings, enforced disappearances, arbitrary imprisonment and militarisation, helps organise mass actions to expose human rights violations and challenge the prevailing culture of impunity, and monitors peace negotiations between the government and the insurgent National Democratic Front of the Philippines. Karapatan is currently facing bogus court charges and state vilification in reprisal for its advocacy work at the UN Human Rights Council.

What would you say have been the greatest successes of the UN in its 75-year history?

I deem the international human rights covenants and declarations as among the greatest successes of the UN in its history. By establishing such norms, including the right of peoples to self-determination, the UN has laid down principles for the respect, promotion and protection of individual and collective rights.

The resolution on the promotion and protection of human rights in the Philippines was adopted in July 2019, and it urged the Government of the Philippines to “take all necessary measures to prevent extrajudicial killings and enforced disappearances, to carry out impartial investigations and to hold perpetrators accountable, in accordance with international norms and standards, including on due process and the rule of law.” It also called upon the government to cooperate with the Office of the United Nations High Commissioner for Human Rights (OHCHR) and the mechanisms of the HRC, including by allowing country visits and refraining from intimidating or retaliating against human rights defenders (HRDs). Finally, the resolution requested the OHCHR to prepare and present a comprehensive report on the situation of human rights in the Philippines for follow-up.

What things are currently not working at the UN and need to change?

Positive actions of the UN to uphold human rights and peoples’ rights are stopped short when it comes to implementation by governments, including that of the Philippines. Governments use a variety of tactics to undermine human rights norms agreed upon through the multilateral platform.

Second, they appear to abide by the UN’s calls, views and recommendations on paper and they flaunt the numerous covenants and agreements that they signed to make it appear that they comply with international human rights instruments, but instead use their being part of the UN as licence for their warmongering and commission of crimes against humanity.

Third, they use the UN to sanitise their image before the international community while still committing a wide array of human rights violations.

All these need to change if the UN is to strive to continue to be a relevant institution. We are aware of several campaigns by civil society to reform the UN and remedy these problems, but without a concerted, multi-pronged civil society approach and action, and more importantly, the commitment of states to right these wrongs, a crisis may soon grip the UN.

What challenges do you face in your own interactions with the UN system, and how do you navigate them?

We face challenges related to all the above-mentioned tactics used by the Government of the Philippines and others.

When governments deliberately ignore the UN’s calls, views and recommendations and continue committing human rights violations and crimes against their peoples and distorting human rights principles, we conduct more intense lobbying, advocacy and campaigning to leverage domestic and international pressure.

When governments appear to abide by the UN’s, calls, views and recommendations on paper but flaunt the numerous covenants and agreements they have signed to make it seem that they are complying with international human rights instruments, while doing exactly the opposite, we work to expose them through lobbying, advocacy and campaigning.

When governments use the UN as licence for their warmongering and commission of crimes against humanity, we strengthen international solidarity links and coordination among civil society and grassroots people’s organisations.

When governments use the UN to sanitise their image before the international community while still committing human rights violations, we continue to expose them.

Civic space in the Philippines is rated as ‘obstructed’ by the CIVICUS Monitor.