The 49th Session of the Human Rights Council will run from 28 February to 1 April 2022. For the first time since 2020, the session will be held in hybrid mode: civil society will be able to engage in certain debates in person as well as via video, while still being limited to video statements during General Debates. CIVICUS encourages States to continue to highlight the importance of civil society participation, which makes the Human Rights Council stronger, more informed and more effective.

CIVICUS will be engaging on resolutions on Nicaragua, South Sudan and Myanmar, and debates on Cambodia and Afghanistan, as well as calling for formal Council action on Cameroon.

On thematic issues, CIVICUS will be engaging on the resolution on human rights defenders and in the debate on counter-terrorism and human rights.

The government stepped up repression of civil society and opposition in advance of the country’s November 6 general election. Nicaragua’s civic space rating dropped from ‘repressed’ to ‘closed’ – the worst rating possible – in the CIVICUS Monitor in December 2021. Government threats have forced more journalists to flee the country in recent months, with widespread government surveillance and threats commonplace. The Nicaraguan government continued to use all agencies to suppress independent media. The situation for political prisoners, remains dire, in particular in light of the many reports of ill-treatment and torture. Some of the prisoners are elderly or have chronic health conditions. The government has also continued to close organisations by revoking their legal status – at this point there are more than 60 organisations who had their legal status cancelled within the past year. This encompasses a mixture of organisations, from humanitarian and human rights groups to business associations and academic foundations.

The Council will negotiate at this session a new resolution to address the situation and as a follow-up to resolution A/HRC/46/2 adopted at the 46th Session. Given the continued serious violations and impunity, and the unwillingness of the authorities to cooperate and engage with regional and international mechanisms, it is essential that the Council takes a more robust approach to the human rights crisis in Nicaragua.

CIVICUS and our partners urge States to support a resolution establishing a robust investigative mechanism on Nicaragua with a mandate to closely monitor and report on the situation, conduct thorough and impartial investigations into human rights violations and crimes under international law, and contribute to accountability for international crimes.

Authorities embarked on a new wave of repression against peaceful protesters, continued harassing civil society actors. At least 42 have died in extrajudicial killings and many unaccounted for. Impunity and high levels of violence persist, including a five month-long attack by armed groups against civilians in Western Equatoria state that killed dozens and displaced tens of thousands. South Sudanese activists continue to be at risk from cross-border harassment and the targeting by the South Sudanese National Security Service (NSS), including in Uganda and Kenya. Media censorship, suspension and closure of news outlets, seizure of newspapers, and arbitrary arrests and prolonged detention of persons allegedly responsible for critical posts on social media are all prevalent violations of freedom of expression. Implementation of the peace agreement remains slow, risking a recurrence of civil unrest.

In 2021, the Council adopted two resolutions focused on South Sudan. For the first time, the resolution extending the mandate of the Commission on Human Rights on South Sudan (CHRSS) was not consensual. Any merger of the two resolutions should not happen at the expense of a strong investigative mandate. The CHRSS will present its report to the Council this session. We call on States to engage robustly in the debate following the report and to ensure that the mandate of the CHRSSis renewed in full; it is the only mechanism tasked with collecting and preserving evidence of violations of international humanitarian and human rights law with a view to ensuring accountability and addressing human rights and transitional justice issues in South Sudan.

On 1 February 2021, the Myanmar military junta seized power in a coup. The junta arrested the civilian leaders of the national and state governments and declared a state of emergency.

The junta unleashed a deadly crackdown following mass mobilisation by a ‘civil disobedience movement against the coup. In the last year, peaceful protests have been violently disrupted. The junta arbitrarily arresting or prosecuting activists, students, protesters and journalists, and political prisoners have been tortured or ill-treated. The junta have shut off various communications services – including mobile services and internet access, blocked humanitarian aid and attacked entire villages, forcibly displacing tens of thousands.

The UN and numerous countries condemned the coup, and some members of the international community have imposed sanctions. But regional efforts to address the crisis or halt the grave human rights violations have been minimal. The five-point consensus agreement decided by ASEAN leaders in Jakarta in April 2021 has seen little tangible progress. A year after the coup, and 10 months since the adoption of the five-point consensus, serious violations are still being reported daily – some of which may amount to crimes against humanity - and the human rights and humanitarian crisis continues unabated in Myanmar. It is clear that the military junta is not seriously committed to implementing the five-point consensus, even after the visit of Cambodia as the current Chair of ASEAN to the country in early 2022. The UN Security Council has failed to impose a global arms embargo on Myanmar, and financial flows to the military junta continue.

A new resolution to extend the mandate of the Special Rapporteur on Myanmar, as well as a monitoring mandate for the UN High Commissioner on Human Rights, will be presented this session. Scrutiny and accountability are still critical, and we call on States to support a strong resolution on Myanmar which furthers protection and accountability for those on the ground, which includes language on restricting flows of financial support and arms to the military junta.

The UN High Commissioner on human rights will present a report to the Council and we urge States to engage with the debate with a focus on women human rights defenders, and to provide the Special Rapporteur on Afghanistan, who will be appointed this Session, full support.

Civic space in Cambodia remains significantly repressed. Laws are routinely misused to restrict civic freedoms, undermine and weaken civil society, and criminalize individual’s exercise of their right to freedom of expression. Human rights defenders, civil society activists and journalists are often subject to judicial harassment and legal action. Some have been detained for long periods without bail. Recent labour strikes have been disrupted and protesters arrested.

The adoption of resolution A/HRC/48/23 under the Council’s technical cooperation and capacity-building Item at its 48th Session ensured that Cambodia remained on the Council’s agenda, but it has not precipitated any tangible human rights improvement on the ground. The debate with the Special Rapporteur is a critical opportunity to demonstrate that Cambodia remains under scrutiny and that its ongoing human rights backsliding is not going unnoticed. The timing is critical: local elections are scheduled for June 5, 2022 and national elections in June 2023. The last round of elections, in 2018, were fundamentally flawed; they followed the arbitrary dissolution of the main opposition party, the Cambodia National Rescue Party (CNRP), and took place amidst surveillance, intimidation, detention, and politically motivated prosecution of key opposition members. Since then, civic space conditions have deteriorated still further.

It is vital that the Council speaks out strongly against escalating human rights violations, and we urge states to raise concerns in a joint statement during the debate with the Special Rapporteur.

Russian civil society is experiencing an unrelenting campaign of civic space restrictions, and Russian authorities continue to use statutes on "foreign agents” and "undesirable organisations” to restrict civil society organisations from engaging in their work.

Since the Council’s last Session, Russian authorities have expanded their foreign agents' register to include dozens of news organisations, including CIVICUS member OVD-info. In a watershed move, Russian Courts shut down the prominent and well-regarded Human Rights Center Memorial and International Memorial on charges of violation of Russia's foreign agent law. The authorities also detained more than 23,500 protestors in 2021. The Russian Federation continues to question the legitimacy of civil society participation in UN fora and attempting to limit the scope of Special Procedures’ mandates. Russian security services have played a role in suppressing civil society in Belarus, Kazakhstan, and Ukraine. We call on States to raise concerns about these developments in the context of the Council’s Item 4 General Debate.

We further call on States to support a resolution on human rights defenders in conflict and post-conflict situations, which includes elements relating to a safe and enabling environment, without which human rights defenders cannot operate at all; accountability; prevention; and protection – including in the context of emergency support.

We also call on States to support human rights defenders in conflict situations in line with best practice identified by the Special Rapporteur.

Civil society has a vital role to play in furthering democratic freedoms and positive social change, in addressing crises, and in implementing government policy. To do so, they need access to adequate resources to carry out their activities. In the context of increasing civic space restrictions worldwide, the ability of civil society to operate, mobilise and take action is being undermined by cutting off this vital funding supply, including through restrictive counter-terrorism and national security laws.

Restrictions to accessing resources, including restrictions to foreign funding, is today an existential threat facing civil society across the world: from grassroots groups calling for positive change in their communities, to humanitarian organisations supplying vital aid in emergency contexts, to human rights groups seeking to hold governments to account. CIVICUS and our partners will hold a side event with the Special Rapporteur on freedom of association and peaceful assembly to discuss restrictions to accessing resources and its impact on civil society work.

[1] The CIVICUS Monitor tracks civic space worldwide, and assigns countries a rating on a scale ranging from open to closed. ‘Open’ countries are ones in which the state both enables and safeguards the enjoyment of civic space for all people. In ‘narrowed’ countries, while the state allows individuals and civil society organisations to exercise their rights to freedom of association, peaceful assembly and expression, violations of these rights also take place. In ‘obstructed’ countries, Civic space is heavily contested by power holders, who impose a combination of legal and practical constraints on the full enjoyment of fundamental rights. ‘repressed’ countries are ones in which civic space is significantly constrained. In ‘closed’ countries, there is complete closure – in law and in practice – of civic space. 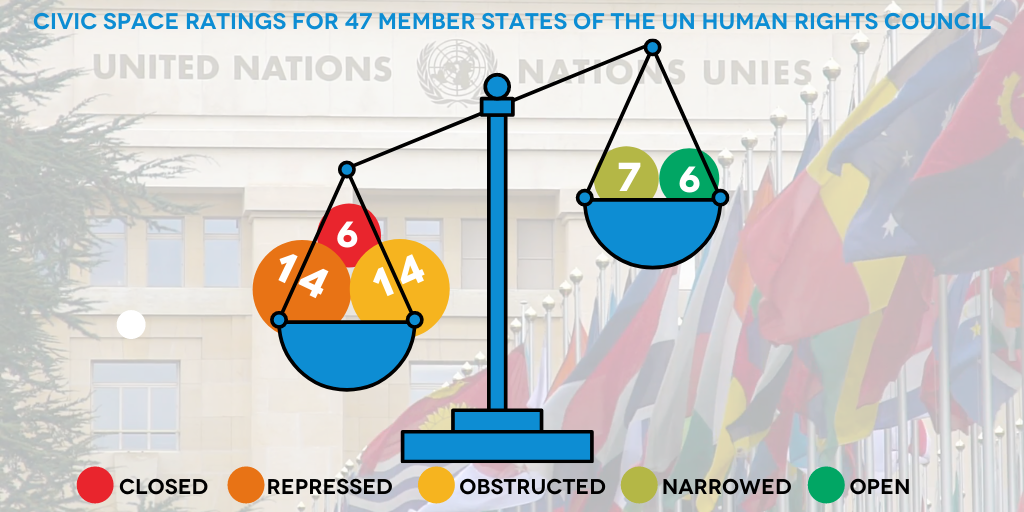