What if ‘bottom-up’ wasn’t the answer? 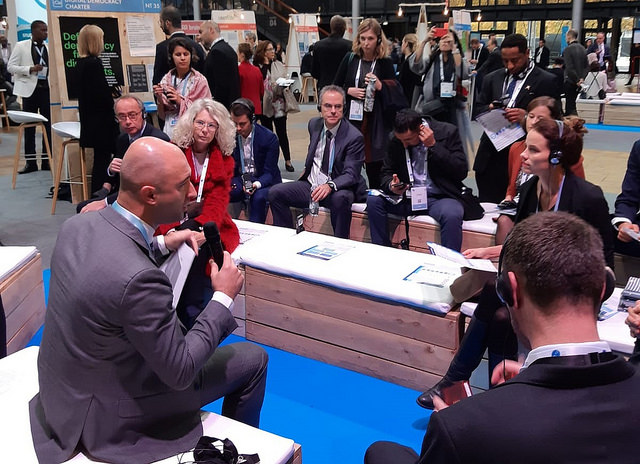 As I was walking around the stands, agoras and meet-ups of the very interactive and lively first edition of the Paris Peace Forum, I couldn’t help but keep stumbling across the by-now well-known expression ‘bottom-up approach’, used as a way to build a fair and better world.

The forum covered a range of extremely insightful topics such as digital peace and cyber security, global solidarity - on malnutrition for instance - and issues of the environment and governance – not only in the public sector but also in the business world.

Discussions focused heavily on issues of global governance, and the phrase ‘bottom-up’ kept resonating like a fatalist acceptance of a system based on enduring inequality, where a tiny elite is and always will be at a higher level than others. As I listened, the question recurred: isn't that a fundamental issue if we are to build fair and equitable governance? How do we take on power when we genuinely believe that some people are above others?

What’s the point of a ‘top’ anyway?

I loved hearing The New Shape Process explain the genesis of the United Nations (UN): in short, Joseph Stalin didn't want a global institution that would tell him what to do. They created what would be accepted. Thus the UN was born as an institution with fundamental unequal power dynamics with little representation of the people and their reality. As CIVICUS has found, these global governance weaknesses remain to this day.

Current discussions around reforming the UN include the idea of creating additional bodies to give the world’s citizens a voice. Questions that came to the table were:

- Isn't the role of current ‘high-level’ representatives supposed to be to give a voice to citizens through them; and why aren't they doing this?

- What becomes the role of these ‘high-level’ representatives if citizens gain their own representation through another structure?

- Isn’t it not only about the structure but also about the power and function of any body? How do we ensure that citizens truly become part of decision making?

- What comes next? How do we move from discussions to decision making and implementation?

Can a ‘bottom-up’ state of mind generate a fairer world?

And here comes that nagging question again: can we create a system that will ensure fair and just global governance if we keep thinking with a ‘bottom-up’ state of mind? As we rethink and change the level of participation of citizens on a global level, shouldn’t it be about moving beyond participative engagement to creating authorship: a system where citizens can write the narrative of their own lives and define the setting where it all takes place, and where they have a genuine stake to hold?

But then we must reconsider the notions of leadership and authority: we must consider that citizens themselves have value, experience and expertise to build upon and that while it may yet be important to have some people in charge of defining the final global decisions, there would have to be a collective effort for everyday leadership, responsibilities and accountability to be embraced and taken further by all. Is that too radical? Is that too idealistic?

These ideas seem to resonate with another striking recurring subject matter at the forum, proposed as a solution to enable smarter aid: prevention. There was a common understanding of the need to be proactive in preventing issues and conflicts rather than trying to solve them. Yet as Franck Bousquet from the World Bank stated, “the problem with preventing is that no one sees it. We don't talk about it and we don't see it. It's difficult to show evidence of what we prevented. Yet it is one of the most important elements of development.” Or in other words, as put by Hélène Ngarnim-Ganga from Agence Française de Développement, “When you work upstream, it's not seen.” What if working from within - rather than from a genuinely unequal bottom-up perspective - enabled a system where people define together what they need, want and don’t want and are accountable to each other for it?

If we are talking about accountability and transparency as a way to build trust, then my main takeaway from the forum is that we haven't gone far enough on this, and we need to, not least because this is also the way in which we can fight back against false information. It's easy enough to identify harmful information, but trickier to differentiate true from false information. What if being accountable for the information we share was taught as an individual responsibility, principle and value and the sharing of unfounded information clearly penalised? We need rules and practices to help ensure that people are accountable for the information they share and its credibility.

But the main threat to peace seems to remain a ‘crisis of identity’, much discussed at this forum as a fundamental disease of the world. This may not be rooted into poverty issues, but into a deeper lack of directions in life, as Idove stated. Extreme violence was presented as the consequence of a break and disconnection in those who feel they have lost their roots or identities. This can happen among both the poorest and most well-off. Violence happens when someone hasn't been able to heal and close their wounds, and sometimes this wound is passed on from one generation to the next, based on past trauma. It's often even tricky to understand who is the victim and who the perpetrator. For extreme violence to be tackled, connecting people seems to be the only answer. And here again, isn’t considering some people at the bottom level and some others at the top level one of the most harmful disconnection one can make?

The Paris Peace Forum was also inspiring in its setting: almost everything and everyone was evolving in a same room, giving a genuine sense of togetherness to the proceedings. With their headsets on, participants could easily follow the different discussions in the agora and take part, go for a braindate, a meet-up or a hackathon by catching-up easily with the programme and participants through the dedicated forum app. Ten projects were selected for further support during the year and their progress will be presented at next year’s forum. Also next year, the call for project leads will come in Paris’ Spring (April-June) and the organisers are thinking of creating regional editions in between. Stay tuned!

Global governance and citizens action for peace in practice

Keen on checking more information about what global governance and citizens action for peace means in practice? Here is a list of initiatives that caught my attention: