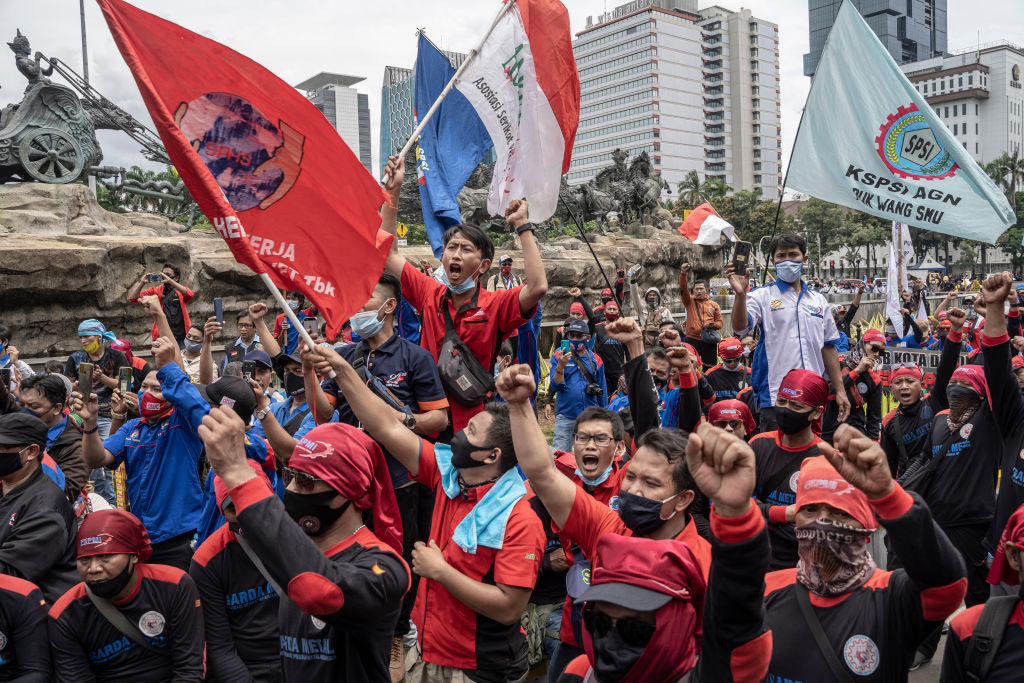 Across the globe every year, workers and trade unions gather together on 1 May which is Labour Day to commemorate the hard-fought struggle for labour rights and to make demands of their governments’ where they are failing to protect workers.

The last year has been particular painful for workers across the Asia Pacific region. According to the International Labour Organisation, a total of 81 million jobs are estimated to have been lost in the region in 2020, due to the pandemic.  The impact of the crisis was far-reaching, with underemployment surging as millions of workers were asked to work reduced hours or no hours at all.

Although there have been various commitments made at the national and international level to address inequalities exposed during the pandemic and to ‘build back better', in a number of countries in the Asia region, governments and businesses attempted to use the opportunity of the pandemic to erode and restrict workers’ and unions’ rights, deny them wages and force them to work in unsafe conditions and even remove them from their jobs.

One glaring example has been in Indonesia where the authorities bulldozed a controversial job creation law through parliament during the pandemic. The government claimed the law was aimed to improve bureaucratic efficiency and cut red tape, particularly in regard to business permits and investment but has been criticised by workers, human rights activists, academics fearing that that it would erode workers’ protections and trigger job insecurity.

Thousands of workers and trade unions took to the streets in 2020 to protest the law but were met with arbitrary arrests, excessive use of force by the police. Even journalists were not spared. Indonesia’s Coordinating Minister for Political, Legal and Security affairs Mohammad Mahfud also attempted to smear the protesters, by telling a televised news conference that the protests were being led by anarchists “aimed at creating chaos and fear in society”.

In Malaysia, in March 2020, police arrested and charged five labour activists and supporters of the National Union of Workers in Hospital Support and Allied Services (NUWHSAS) who has organised a protest outside a hospital in Ipoh to highlight concerns about cleaners working in state-run hospitals who lacked adequate protective gear against infections, which puts them at risk during the pandemic. Health workers have also been subjected to harassment, victimisation and union-busting activities.

Migrant workers have also faced the brunt of the pandemic with many forced to work in unsafe conditions or not paid wages and others facing racism and xenophobia.  Often, they had very few avenues for redress and when they did speak up, often faced reprisals.

Despite this, the  CIVICUS Monitor, a global tool tracking civic space, documented how labour activists, trade unions and others also mobilised to push back on these violations despite attempts to silence their voices.

In South Korea, in November 2020,  tens of thousands of workers demonstrated across South Korea calling on the government to withdraw a regressive labour law revision which would ban workers from occupying certain facilities at workplaces during strikes. These amendments were in violation of the principles of freedom of association existing recommendations by the tripartite ILO Committee on Freedom of Association.

Unions leaders also took on businesses trying to use the opportunity of the pandemic to target trade unions and sack workers. In Cambodia, Soy Sros, a female union leader, stepped up when approximately 100 workers in a handbag factory were told their jobs would not be renewed in March 2020 due to the coronavirus crisis. The factory also suspended unions members including a pregnant woman. When the management refused to meet her, she criticised the decision on social media. Subsequently, all the workers had their contracts renewed. However, Soy Sros ended in detention because of the social media post. After mobilisation by activists and trade unions, Soy Sros was subsequently released after being detained without trial for nearly two months.

In Taiwan, Migrants Empowerment Network in Taiwan (MENT), an alliance of migrant workers’ groups mobilised protests in May 2020 outside the Ministry of Labour in Taipei calling on the government to guarantee safer working conditions for migrant workers. The protesters said that employers had barred migrant workers from going outside due to the COVID-19 pandemic, while other workers have been unable to return to their jobs in Taiwan or visit their home countries.

According to the International Trade Union Confederation (ITUC), the pandemic has shown the key role played by labour activists and unions in defending employment and wages and campaigning for decent health and safety at work. In some cases, the pandemic has also accelerated the experience of virtual organising – over Zoom or other internet platforms. Unions represented workers threatened with being laid off, pushed for adequate severance pay, sought expanded access to social protection and raised the concerns of women workers who faced even greater discrimination and of migrant workers denied equal access and equal treatment.

Instead of repressing their voices, it is crucial that moving forward that governments and businesses in the Asia region recognise the vital role that labour activists and unions play in representing working people ,  respect the fundamental rights and freedoms and engage them with them if they truly want to build back better.