21st century activism is complex, persistent and all-pervasive. Governments and businesses will have to reinvent themselves 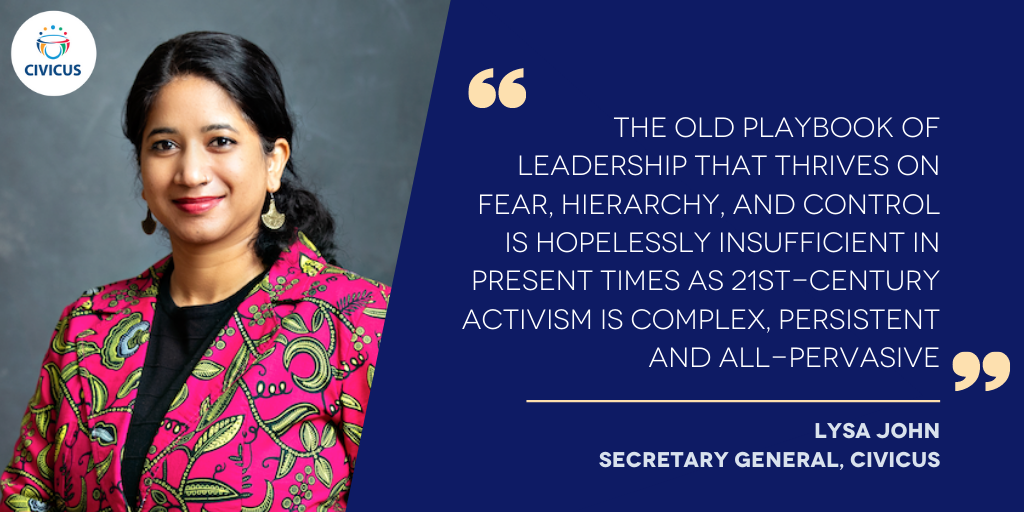 The nature of civic space has changed significantly since the start of the pandemic. The CIVICUS Monitor, which systematically tracks the status of civic freedoms across countries, has shown that even in established democracies, governments have used the pandemic to disproportionately curtail fundamental freedoms. Nearly 9 of 10 people now live in countries where civic freedoms are under attack, and over a quarter of the world’s population – 4 of 10 people –  live in countries where civic space is completely closed. That is, in contexts where they can be routinely attacked, arrested, or even killed by state or non-state actors for simply exercising their universally recognised right to expression, peaceful assembly, and association.

Across 2020, we have seen an exponential rise in two trends that seriously threaten the work and lives of both activists and active citizens: one, the devastating misuse of technology to increase censorship, surveillance and targeted misinformation or propaganda against civil society, particularly journalists and human rights defenders; and two, the impunity with which state and non-state actors are able to attack and intimidate civil society and active citizens who speak out against governments and organize for their rights. The CIVICUS Monitor has also made a special note of the rise in attacks on women and peaceful protestors in the past year.

Despite this, we see that civil society has striven to find new ways to fulfill its unique purpose. Our annual State Of Civil Society report, now in its 10th edition, provides evidence that social movements are more diverse, more connected, and more mainstreamed than ever before. Technology has made access to opportunities for cross-border, multi-sector, and inter-generational civic action more possible. The old playbook of leadership that thrives on fear, hierarchy, and control is hopelessly insufficient in present times as 21st-century activism is complex, persistent and all-pervasive. Governments and businesses will have no choice but to reinvent themselves to be more open, accountable, people-centered in the coming years. This not only requires us to rethink mechanisms for civic participation and people-centered accountability at the level of global and multilateral institutions but also requires a radical change in the way public and private institutions operate at national and local levels.

As evidenced in this pandemic-related survey on sustained support systems for civil society,  every country must put in place the infrastructure and investment needed for a strong, well-networked, and fully empowered civil society. We need stronger national and international laws that protect civil society and civic freedoms, and we need greater public engagement to demand and ensure the effective implementation of these laws. People of all ages and affiliations should have the means and resources to actively understand, influence, and engage with public policies. In addition to this, we need to foster dialogue & initiative across all sections of society and demonstrate an inclusive approach to leadership that celebrates a creative & collaborative engagement with diversity and dissent.