There has been a rapid decline in civic freedoms and democratic norms in Francophone West Africa with ruling presidents evading term limits and muzzling their opposition and pro-democracy groups, CIVICUS said ahead of presidential elections in Guinea (18 October) and Côte d’Ivoire (31 October).

Over the next six months a series of elections will take place across Francophone West Africa. Voting kicks off in Guinea and Cote d'Ivoire later this month, followed by elections in Burkina Faso (November), Niger (December-January) and Benin (April). Togo already had a contested presidential election in February 2020. 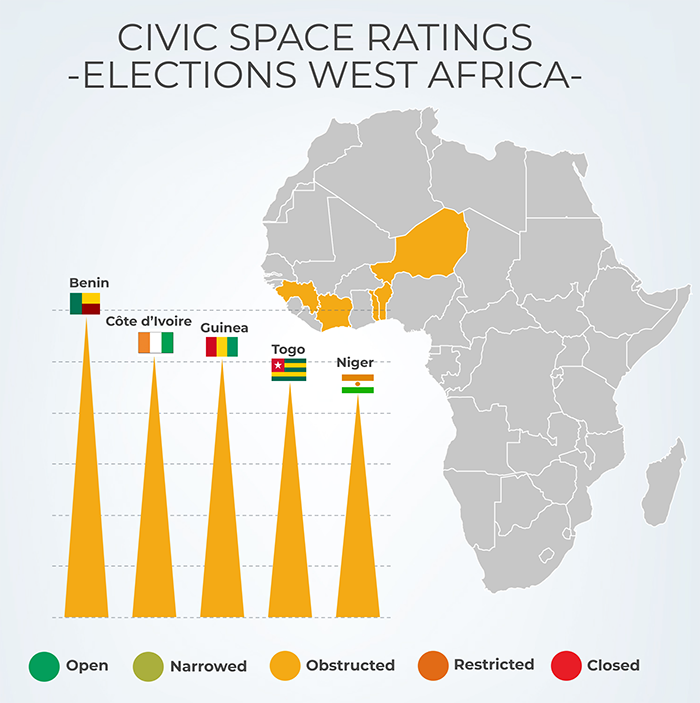 In Togo, Guinea and Côte d’Ivoire, violence and political tensions are being fuelled by presidents refusing to step down. In Benin, recent changes in eligibility requirements mean that members of the opposition may not be able to run for presidency, while Côte d’Ivoire, Niger and Burkina Faso are confronting or emerging from violent armed conflicts which are being used to justify repressive laws and policies. In addition, the restrictions introduced in response to the COVID-19 pandemic and armed groups spilling over from the Sahel to the Gulf of Guinea are making the political situations more volatile.

In this tense political environment, the new report “Civic space backsliding ahead of elections in Francophone West Africa” examines the tools of repression being used to undermine opposition groups, human rights defenders, activists and journalists. with a focus on Benin, Côte d’Ivoire, Guinea, Niger and Togo.

It documents recent Internet disruptions, the arrest of hundreds of pro-democracy activists and journalists and the killing of dozens of peaceful protesters in demonstrations organised over the last three years. Governments are using restrictive laws, over-complicated registration processes, judicial harassment and excessive use of force to clampdown on civil society, particularly when dissent is expressed online or during protests.

“Instead of working with civil society groups to create an enabling environment for free and fair elections, authorities across Francophone West Africa have resorted to muzzling human rights defenders and pro-democracy activists. In the hope of stamping out all opposition, they have created a climate of fear which fuels political violence, erodes the rule of law and undermines regional stability,” said François Patuel, senior researcher on West Africa and author of the report.

In Guinea, where President Alpha Condé will run for a third term on 18 October 2020, over fifty people were killed since October 2019 in protests organised by the political opposition and pro-democracy group Front National de Défense de la Constitution (National Front for the Defence of the Constitution, FNDC). In March 2020, the constitutional referendum which opened the way to Alpha Condé running for a third term was marred with a social media shutdown and intercommunal clashes in the Guinea Forest region which left over 30 people dead. Dozens of FNDC supporters and journalists have been detained since the creation of the movement in April 2019.

In Côte d’Ivoire, at least 12 people were killed in protests and clashes between political supporters following President Alassane Ouattara’s decision to run for a third term for the presidential election scheduled on 31 October 2020. Public protests have been banned since August 2020. The authorities have adopted laws criminalising false news and used them to target journalists, bloggers and politicians expressing dissent, including members of parliament such as Alain Lobognon who remains in detention since December 2019. In gross contempt to regional institutions, Côte d’Ivoire has been ignoring orders from the African Court on Human and Peoples’ Rights to release pro-Soro supporters and allow Guillaume Soro and Laurent Gbagbo to stand for elections.

“Local human rights groups do not take up sensitive political cases for fear of reprisals. Even lawyers are scared.” --Woman human rights defender, Abidjan, 15 May 2020.

“On paper, the right to freedom of expression is supposed to be protected. But in practice, journalists are intimidated when they write on sensitive topics such as land rights, police brutality and corruption.” -- Interview with a human rights defender, Lomé, 14 May 2020.

With civic freedoms backsliding across West Africa Francophone, civil society organisations need support from regional and international partners to remain safe, to ensure their voice is heard in international and regional fora and to increase the pressure on national authorities for positive human rights change. ECOWAS and the African Union, in particular, must step-up their response to the authorities’ disregard for regional standards and instruments, including their efforts to undermine the African Court of Human and Peoples’ Rights.