February 13 marks 900 days since Indian activist Sudha Bharadwaj was arrested and imprisoned. On this day, global civil society organisation CIVICUS calls on the Indian government to immediately release Bharadwaj and drop all charges against her.

Since 2018, Sudha and 15 other activists, writers and lawyers have been arrested under the draconian Unlawful Activities Prevention Act (UAPA) and accused of having links with the banned Communist Party of India (Maoist). It is alleged that she and the other human rights defenders conspired to incite Dalits at a public meeting which led to violence in Bhima Koregaon village in the Pune district of Maharashtra in January 2018.

Sudha Bharadwaj was initially placed under house arrest in August 2018 but in October 2018 was moved to Byculla Women’s Prison in Mumbai. There are serious concerns about the validity of evidence against her. This week a U.S. digital forensics firm raised questions about incriminating letters used to implicate Sudha and the other activists. The letters were found on an activist’s laptop which is thought to have been hacked.

Sudha’s health continues to deteriorate in prison. The 59 year old suffers from diabetes, hypertension and Ischemic heart disease, making her susceptible to COVID-19 in the cramped prison. Despite underlying health issues, Bharadwaj’s pleas for bail have been quashed by the courts as the National Investigation Agency claims her condition is not serious.

Sudha, a lawyer and rights defender, has also been denied books and newspapers in prison. A special  National Investigation Agency court finally ruled last month that Sudha can receive five books a month from outside prison. However, the judge has ordered the Superintendent of Byculla prison to “carefully examine” the books for “objectionable content” before handing them over.

“The fact that my mother, a lawyer, has been denied access to books and newspapers shows the absolute determination of the Modi government to restrict the liberties of human rights defenders. My mother has been unjustly detained for over two years without trial. We are increasingly worried about her health and demand that she be released immediately to rest at home until her case comes to court,” said Maaysha, Sudha Bharadwaj’s daughter. 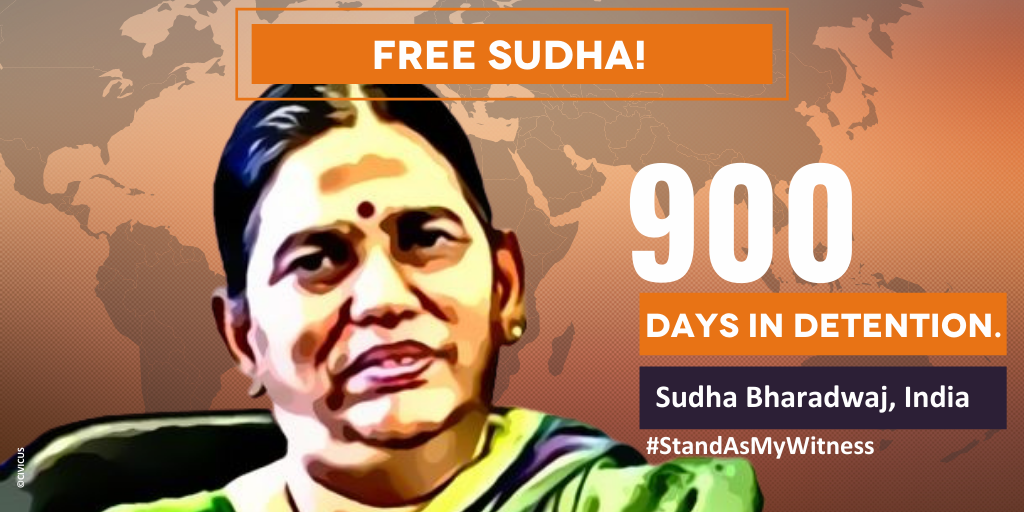 The treatment of Sudha highlights the increasingly repressive measures used by Prime Minister Narendra Modi’s government to clamp down on dissent and silence human rights defenders.

In January,  the UN Human Rights office expressed serious concern about the detention of human rights defenders including those in the Bhima Koregaon case. It urged the Indian authorities to immediately release the detainees, at the very least on bail before their court hearing. While in October last year, the United Nations High Commissioner for Human Rights, Michele Bachelet, expressed concern over the use of “vaguely defined laws” to silent activists and government critics.

“The Modi regime is abusing the Unlawful Activities Prevention Act (UAPA) and using it to round-up activists and human rights defenders on trumped-up charges and keep them for long periods in detention. Sudha is a lawyer and activist who has spent her life defending Indigenous people in India and protecting workers’ rights. She should never have been arrested but unfortunately her human rights work has put her directly in the firing line of the government,” said Josef Benedict, Asia-Pacific civic space researcher for CIVICUS.

The undersigned organisations call for the immediate and unconditional release of Kashmiri human...