On 9 July 2021, Buzurgmehr Yorov, a Tajikistani human rights lawyer and outspoken critic of the government, will mark his 50th birthday behind bars.  Yorov was wrongfully imprisoned in September 2015 and sentenced to 22 years on trumped-up charges. Ahead of this milestone birthday,  human rights organisations CIVICUS and the International Partnership of Human Rights (IPHR) call for his immediate and unconditional release.

In 2015, Buzurgmehr was arrested after representing members and leaders of the banned opposition party, the Islamic Renaissance Party of Tajikistan (IRTP). Following his arrest, he was interrogated for ten hours and allegedly beaten. He was then detained for eight months before his trial began - during this time he was physically abused and held in solitary confinement on many occasions.

In a series of closed and unfair trials held between October 2016 and August 2017, the human rights lawyer was convicted on various charges, including overthrowing the government, inciting unrest, and insulting the President and government officials. Although his sentence was reduced by six years in November 2019 to mark the 25th anniversary of Tajikistan’s constitution, he is currently being held in the Strict Regime Prison Colony No.1 in Dushanbe.

In May 2019, the UN Human Rights Council concluded that Buzurgmehr’s arbitrary detention is against international law, and it called on the Tajikistan authorities to release him immediately.

“The Tajikistani authorities use intimidation, harassment, arbitrary arrest, threats and criminal prosecution to pressure independent lawyers to drop or refrain from taking up cases and issues considered to be politically sensitive. Burzurgmehr Yorov was brave enough to try to do his job despite this pressure. The international community should urge the Tajikistani authorities to implement UN recommendations and release him immediately,” said Brigitte Dufour, Director of IPHR.

Buzurgmehr has repeatedly been subjected to torture and ill-treatment in detention, including severe beatings and periods in solitary confinement. His family are particularly concerned about his health during the COVID-19 pandemic, as several fellow prisoners have contracted the virus and died.

Buzurgmehr Yorov has been a vocal critic of government abuse and has been awarded numerous international prizes in recognition of his contribution to democratic and civil rights in Tajikistan. After founding Sipar law firm in 2007, he frequently represented government critics and provided legal assistance to victims of human rights violations.

Buzurgmehr’s family recalls one occasion before his detention - when the police demanded he accompanies them to the station, Buzurgmehr replied, "Here, in the office of the bar, there are people who came from afar, from different parts of the country to see me. I will never make them wait just because I am urgently called to talk to the head of the Interior Ministry’s Department for Combating Organized Crime. Even if President Emomali Rahmon invites me to talk - until I fulfill my duties to clients, I'm not going anywhere." 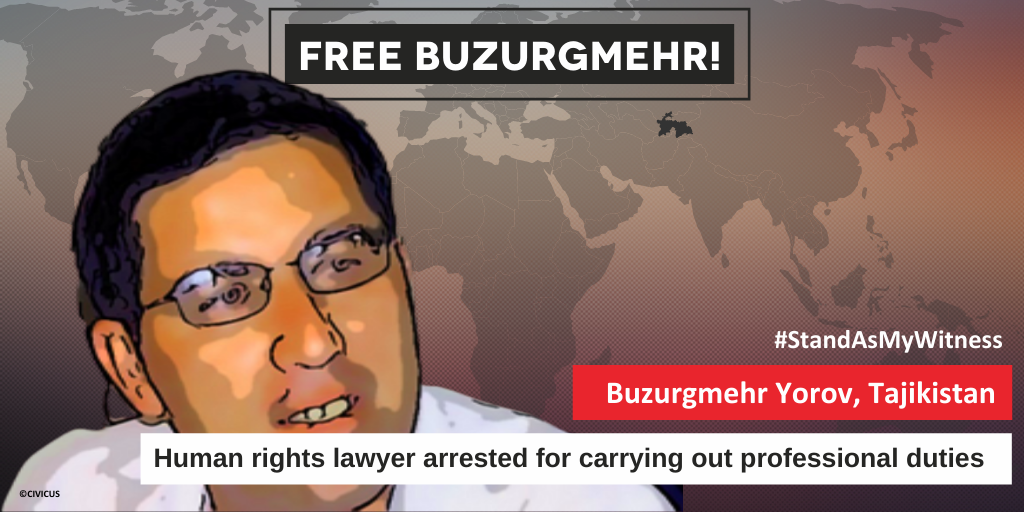 Buzurgmehr’s detention marks a concerning trend in Tajikistan, where independent lawyers are increasingly facing intimidation, harassment, arbitrary arrest, threats, and criminal prosecution, in an attempt to stop them from taking on politically sensitive cases.

“It is outrageous that Buzurgmehr Yorov and other lawyers in Tajikistan are being unfairly targeted and intimidated simply for doing their job - they play a vital role in protecting the fundamental freedoms of Tajik people. The authorities in Tajikistan must release him immediately and ensure that all lawyers are able to perform their professional duties without fear of reprisal,” said David Kode, Advocacy and Campaigns Lead at CIVICUS.

Buzurgmehr Yorov is one of the faces of CIVICUS’s international #StandAsMyWitness campaign, calling for the release of imprisoned human rights defenders across the world. Ahead of Buzurgmehr Yorov’s 50th birthday, CIVICUS and IPHR join calls for his immediate and unconditional release. The international community must continue to put pressure on the Tajikistani authorities to improve the situation of lawyers in the country and to respect fundamental rights.

Tajikistan is rated as ‘repressed’ by the CIVICUS Monitor, CIVICUS’s online platform that measures civic freedoms, including the freedoms of expression, association, and assembly, in every country across the world.

For more information or to arrange an interview with Buzurgmehr Yorov’s brother, or CIVICUS and IPHR, please contact:

CIVICUS is a global alliance of over 10,000 civil society organisations and activists dedicated to strengthening citizen action and civil society throughout the world.

International Partnership for Human Rights (IPHR) is an independent, non-governmental organization founded in 2008 and based in Brussels, which works in partnership with civil society organizations in the former Soviet Union to raise human rights concerns at the international level and promote respect for the rights of vulnerable communities.