International human rights groups raise alarm about the state of civic rights in Venezuela ahead of the country's review at the United Nations Human Rights Council on 25 January, 2022.

CIVICUS, the Latin American and Caribbean Network for Democracy (REDLAD) and Espacio Público call on UN member states to urge the government of Venezuela to protect civic freedoms as its human rights record is examined by the UN Human Rights Council on 25 January 2022 as part of the 40th session of the Universal Periodic Review (UPR).

The last time the country’s rights record was reviewed was in November 2016, when UN member states made a total of 274 recommendations, 40 of which related to civic freedoms. Venezuela subsequently accepted 23 recommendations and committed to taking concrete measures. Among these measures, to “fully guarantee freedom of expression and free access to information and protect journalists against threats and attacks” and to ensure “a proportional use of force by security forces and ensure that cases of torture are investigated and that the perpetrators are brought to justice.”

In a joint submission to the Human Rights Council this UPR cycle, our organisations assessed the implementation of these recommendations and compliance with international human rights law and standards over the last five years. The submission found that since 2016, Venezuela has persistently failed to address unwarranted restrictions on civic space, particularly those related to the rights to the freedoms of peaceful assembly and expression. Of the 40 recommendations received, Venezuela only partially implemented seven and did not implement 33. 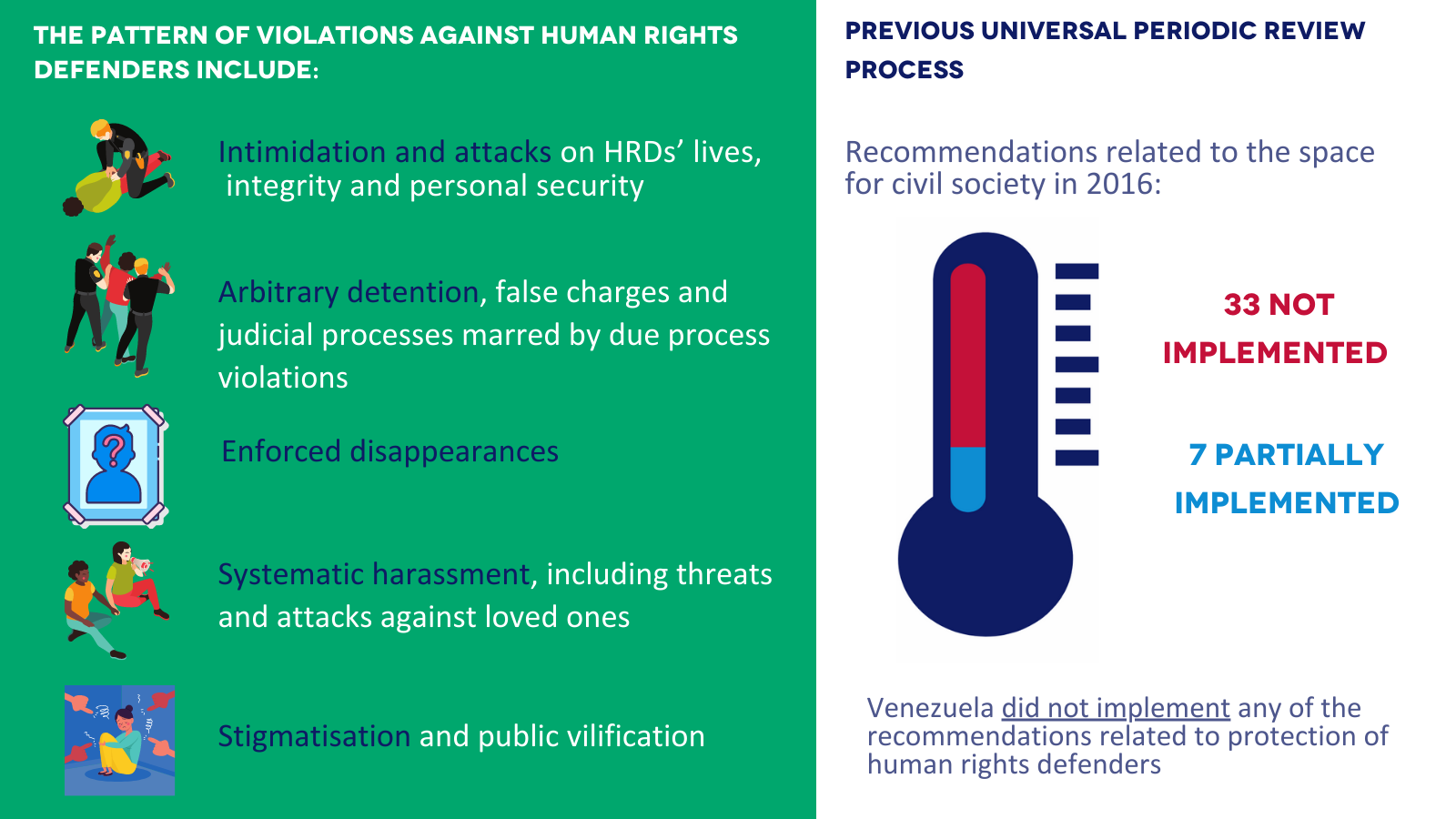 We are deeply concerned by the restrictions facing civil society organisations, particularly those working on humanitarian and human rights issues. Judicial persecution and financial restrictions against civil society, rights defenders and journalists have intensified, combined with a stigmatising discourse that seeks to justify attacks against the legitimate exercise of the freedoms of association and expression. We are also alarmed by the continuing systematic suppression of peaceful protests.

The 2017 Anti-Hate Law for Peaceful Coexistence and Tolerance uses vague wording about ‘hate’ offences to give the government ample power to censor dissent and curtail independent media. It has been used to criminalise peaceful protests and prosecute human rights defenders, civil society activists and journalists. Since the law was enacted, at least 42 people have been prosecuted under its provisions, including HRDs, journalists, protesters, healthcare workers and individuals who expressed dissatisfaction on social media.

The operation of civil society organisations is restricted through a repressive regulatory framework and a hostile environment. The 2010 Law for the Defence of Political Sovereignty and National Self-Determination remains in force, bans organisations working on promoting and protecting political rights from receiving foreign funding. In 2020 and 2021, authorities created additional registration and reporting requirements that create bureaucratic hurdles for organisations and restrict their operation.

Despite commitments to freedoms of expression guaranteed in the Constitution, the government has also continued to use restrictive laws such as criminal defamation provisions under the Penal Code to criminalise criticism of the authorities. Tactics to curtail independent press such as financial strangulation, cancellation of broadcasting licences, equipment confiscation, and censorship are widespread. 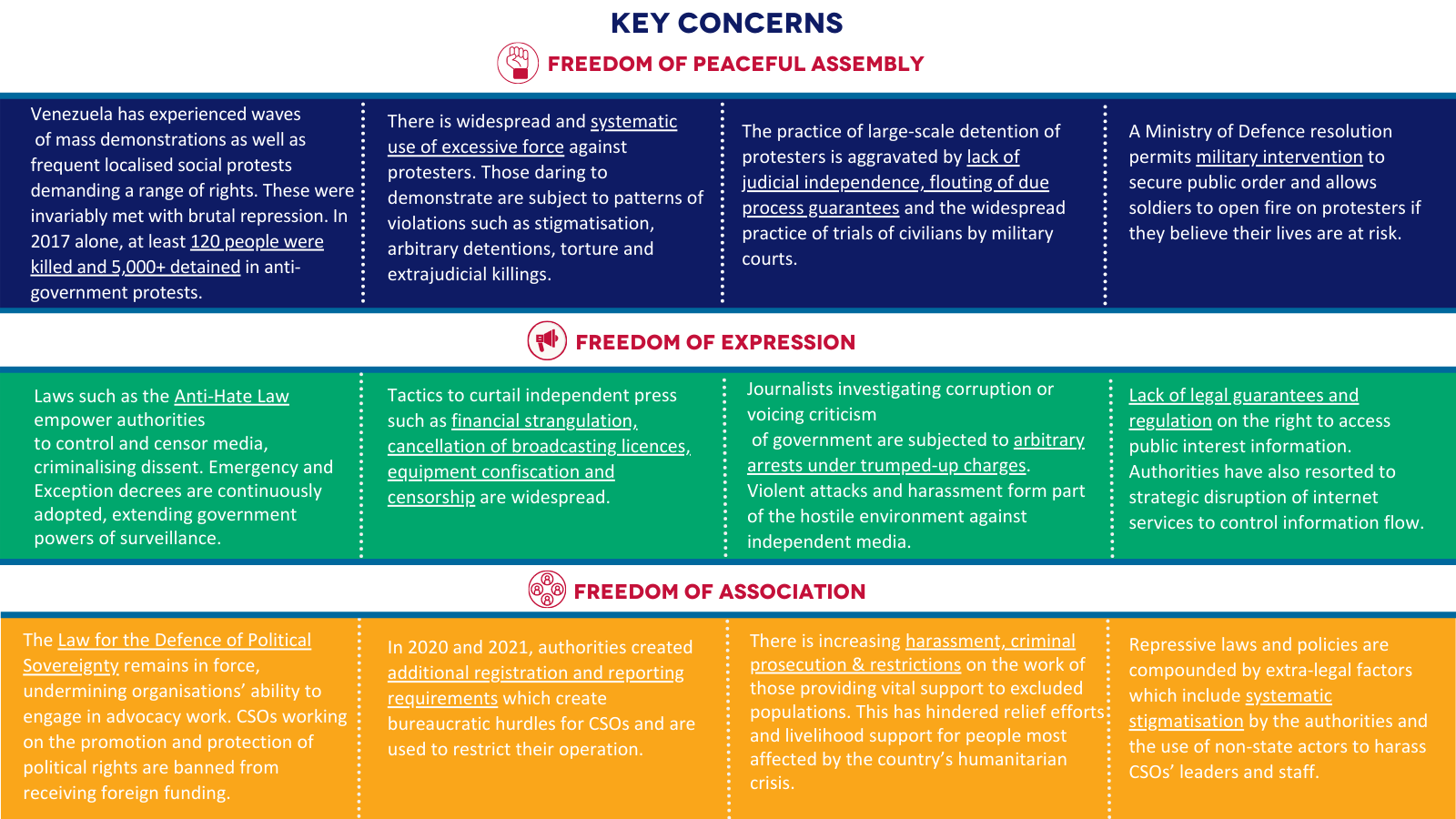 ‘States must take the opportunity of Venezuela’s human rights review to hold the government to account for violations. The authorities have not only failed to deliver on the human rights commitments it made but has continued to use the judicial system to silence dissent,’ said David Kode, Advocacy & Campaign Lead at CIVICUS

Between 2016 and 2020, Venezuela has experienced waves of mass demonstrations and frequent localised social protests demanding a range of rights. These were invariably met with brutal repression, including widespread and systematic excessive use of force by security agents against protesters. In 2017 alone, at least 120 people were killed and 5,000 detained in the mass protests sparked by a constitutional crisis after the government and the country’s highest court disavowed the National Assembly. In this period, the response to protests was characterised by a pattern of violations that included arbitrary detentions, enforced disappearances and extrajudicial executions.

‘It is time for Venezuela to take action to reverse this environment of violations. The authorities must stop creating a legal framework that suppresses the defence of human rights,’ commented Ángela Rodríguez, Research Assistant at REDLAD.

As highlighted in our joint submission, CIVICUS, REDLAD, and Espacio Público urge states to make recommendations to Venezuela, which, if implemented, would guarantee the freedoms of association, peaceful assembly and expression, and the state’s duty to protect.
Key recommendations that should be made include:

The examination of Venezuela will occur during the 40th Session of the UPR. The UPR is a process, in operation since 2008, which examines the human rights records of all 193 UN Member States every four and a half years. The review is an interactive dialogue between the State delegation and members of the Council and addresses a broad range of human rights topics. 11 other countries will also have their rights record reviewed, including Haiti, Syria and Zimbabwe. Following the review, a report and recommendations are prepared, discussed and adopted at the following session of the Human Rights Council (June 2022).

Civic space in Venezuela is rated as ‘repressed’ by the CIVICUS Monitor.

To Permanent Representatives of Member and Observer States of the United Nations Human Rights...

To Permanent Representatives of Member and Observer States of the United Nations (UN) Human Rights...