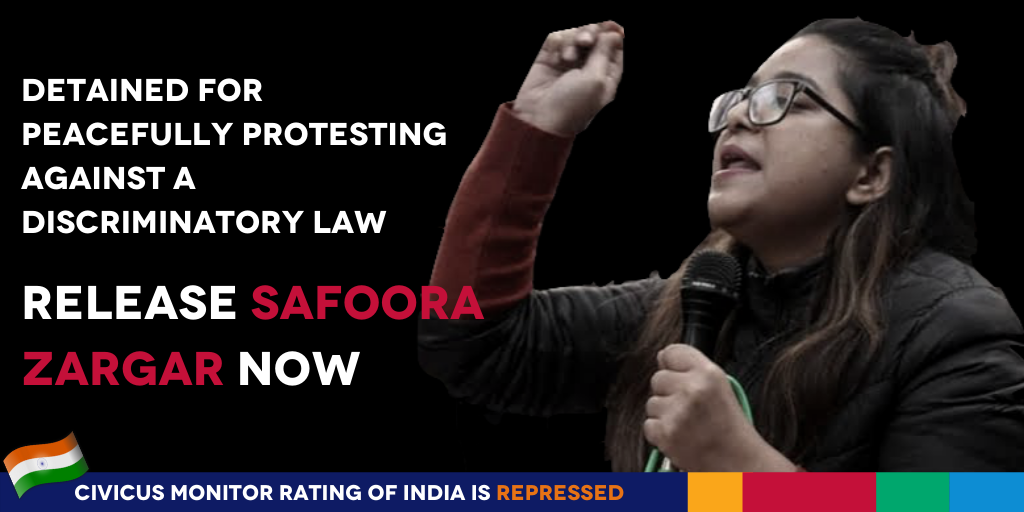 Re: Release human rights defenders at risk in the context of COVID-19

We, the undersigned organizations, write with great concern regarding the situation of student activists Safoora Zargar, who is four months pregnant, Meeran Haider, Shifa-Ur-Rehman and Sharjeel Imam, all detained under the Unlawful Activities (Prevention) Act (UAPA). We believe their detention is unfounded and designed to punish them for defending human rights and engaging in peaceful protest against a discriminatory law. In addition, their being jailed in the context of the COVID-19 pandemic is unnecessarily putting their lives and health at serious risk. We urge you to immediately and unconditionally release all four activists, as well as other persons who have been detained, charged, or convicted simply for defending human rights and exercising their right to freedom of expression and peaceful assembly.

Safoora Zargar, Meeran Haider and Shifa-Ur-Rahman are student activists who were involved in protests against the Citizenship (Amendment) Act (CAA) and arrested in April 2020. Safoora Zargar, Meeran Haider and Shifa-Ur-Rahman, were arrested by the Delhi Police on 10 April, 1 April and 24 April on charges of rioting and unlawful assembly, reportedly in connection with their alleged role in the demonstrations.The CAA legitimises discrimination on the basis of religion and contravenes the Constitution of India and international human rights law. Student activist Sharjeel Imam was arrested in January 2020 under charges of sedition for his speech during anti-CAA protests. The additional charges under UAPA were brought in April 2020. All of them are currently in pre-trial detention.

Their situation is not unique. For example, on 14 April 2020, the authorities also detained human rights activists Anand Teltumbde and Gautam Navlakha under the UAPA for allegedly inciting caste-based violence during a 2018 demonstration in Bhima Koregaon, Maharashtra state. Nine other activists have been detained since 2018 in relation to the same case. They are known for their work defending the rights of Adivasi and Dalit communities and should all be released immediately.

We are seriously concerned that the Indian authorities have routinely misused draconian, anti-terrorism laws such as the UAPA, to undermine human rights, stifle dissent and press freedom. This is even more concerning during the COVID-19 pandemic. The slow investigative processes and extremely stringent bail provisions under these laws mean that human rights defenders and others who speak out may face many years behind bars unjustly.  In their communication to the Government of India on 6 May 2020, eight UN Special Rapporteurs and the Working Group on Arbitrary Detention raised serious concerns about the 2019 amendment to the UAPA regarding 'the designation of individuals as "terrorists" in the context of ongoing discrimination directed at religious and other minorities, human rights defenders and political dissidents, against whom the law has been used.' They also noted that non-violent criticism of state policies or institutions should not be made a criminal offence under counter-terrorism measures in a society governed by the rule of law and abiding by human rights principles and obligations. Arrests of peaceful protesters violate India’s obligations under international law, specifically the International Covenant on Civil and Political Rights (ICCPR), to respect and protect the rights to liberty, to freedom of expression and peaceful assembly, set out in Articles 9, 19 and 21 of that treaty.

On 25 March 2020, the UN High Commissioner for Human Rights urged all states to release “every person detained without sufficient legal basis, including political prisoners, and those detained for critical, dissenting views” in response to the COVID-19 pandemic. With at least 200 prison inmates and jail staff testing positive for the COVID-19 across India, including in Maharashtra, Madhya Pradesh and Karnataka, when the authorities misuse draconian laws to detain activists and human rights defenders, including peaceful protesters, they are not only persecuting them, they are unnecessarily putting their lives at grave risk.

In addition, Safoora Zargar’s pregnancy makes her release even more urgent, particularly amid the COVID-19 pandemic. The United Nations Rules for the Treatment of Women Prisoners and Non-custodial Measures for Women Offenders, also known as the Bangkok Rules, recommend that while deciding on pre-trial measures, non-custodial alternatives should be preferred for pregnant women where possible and appropriate.

The Indian authorities need to ensure that, as they apply the Supreme Court of India’s directive to decongest prisons to contain the spread of COVID-19, they immediately and unconditionally release student activists Safoora Zargar, Meeran Haider, Shifa-Ur-Rehman and Sharjeel Imam who remain in jail simply for peacefully exercising their right to freedom of expression by opposing the discriminatory law. They should also immediately release the 11 rights activists and journalists jailed in the Bhima Koregaon case.

The fight against the pandemic must be inclusive and not selectively used to dissuade and prevent human rights defenders from exercising their human rights.