Words from a Syrian prison 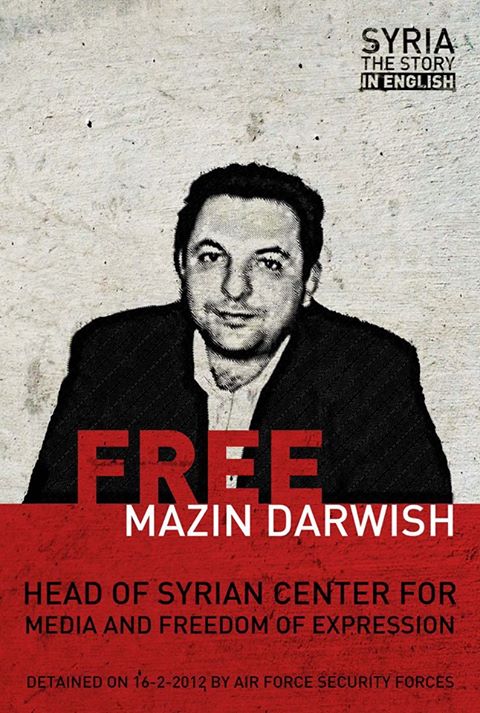 Mazen Darwish, president of the Syrian Centre for Media and Freedom of Expression, has been held in detention for more than a year by the Syrian authorities. Mazen’s colleagues have appealed to CIVICUS to highlight his case ahead of the International Day of Torture on 26 June.

Mazen was recently awarded the 2013 Bruno Kreisky Prize for Services to Human Rights and had the following to say from prison in Damascus:

First, I would like to thank you all for coming today and for honoring me with this award that holds the name of Bruno Kreisky; the emblem, this award which persons like Nelson Mandela,  Benazir Bhutto and Lula da Silva has preceded me to it.

Though, there is no greater happiness for a prisoner than of the feeling that the outer world is remembering him, but before the devastation and the bloodshed that engulfed my homeland, the feeling of happiness becomes a kind of luxury that I am ashamed to have it.

I would to like to make a confession to you:

I always looked with wonder to Mr. Kreisky asking myself why a firm fighter and a statesman pushed his nation to permanent neutrality leaving voluntarily the ecstasy of victory and the joy of winning, till I have realized  that there is no winner in wars, everybody is a loser, and there is nothing good in war except its ending.

From Baghdad to Budapest, Lebanon to Prague and from Vietnam to the two Koreas, I have learnt that there is nothing good in war except its ending, and from the victims of wars to the victims of racial indiscrimination in South Africa, to Rwanda and Bosnia to the victims of tyranny in our Arab world and Franco and Pinochet and the Greek colonels, I have learnt that the road to democracy is as far from the path of extremism and terrorism as it is from dictatorships and tyranny.

May be, that the situation went in Syria worse than our worst nightmares, but can we give up the right to change our reality or our legitimate ambitions to freedom, dignity and citizenship or our duty to reduce inequality and providing more freedom to our societies, because those mottos were used as a ride for tyrannical authoritarian regimes and violent Takfiri movements?

Do we have to chew the cud of our experiences in the Arab world time after time for each, time tyranny and corruption married, they only beget extremism, violence and terrorism.

Yes .. we want freedom and dignity and justice and yes we deserve it, but it surly is not the freedom of dying under torture or slaughtered, it is not to be killed by a shell from a jet or a by car bomb, it is the freedom of life on the basis of sharing and coalition between the universality of human rights values and the privacy of local social relations in order to reshape global human sphere that makes the life itself a moral human experience and we look at it as more owned by others than us.

I wish I could address so many people by their names through your rostrum if time allows, but they are much more than time and far from the words to describe.

I want to address my colleagues who went with me to detention and to those who were lucky enough not get detained:

I am honored that I worked with you and touched your dreams and sorrows.

My friends who amaze me with their loyalty and adherence to what we believed in:

Do not lose your faith even those who do not have the bricks to build threw the sin at you.

My wonderful family... thanks you for your patience, love and support for all these hard years: nothing seems meaningful without your presence.

Jailors who assume their responsibility to discipline me for ten months, and especially to those who disciplined in the first days of Eid al-Adha:

I feel sorry for all of us and I wish a happy life for your children with no fear or torture but with festivals that are full of joy and love shared with my two children Inana and Adad.

In the swirl of the crazy violence, I lost so much of my beloved, they were killed, detained, wounded, kidnapped, and homeless like my colleague Dr. Ayham Ghazoul, my cousin first lieutenant Ali Darwish, my brother Sami Akel and my friend Khalil Matouk: to them and to their families... I bow.

I strangled my tears because it is lesser than your sorrows, and I released my voice for you to get out to the sun hand in hand crying once again:

Syrian nation is one

Syrian blood is one

Syrian future is one