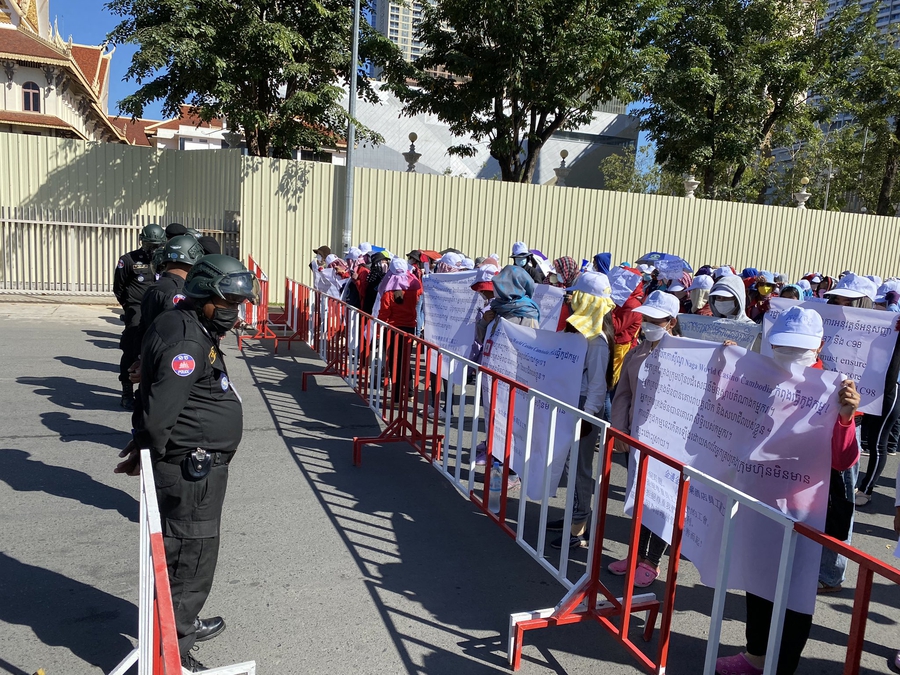 CIVICUS: World Alliance for Citizen Participation and the Asian Forum for Human Rights and Development (FORUM-ASIA) are gravely concerned about the escalation of harassment against the NagaWorld union members and further arrests this week by the Phnom Penh police under the pretext of violating a pandemic law. We urge the government to release the detained activists immediately and unconditionally, and to further respect the right to peaceful assembly of the workers in Cambodia.

Around 2000 members of the Labour Rights Supported Union of Khmer Employees of NagaWorld (LRSU), a casino workers union began a strike on 18 December calling on the company to reinstate 365 workers laid off in April 2021. These actions taken by the state targeted union leaders and did not fully comply with Cambodia’s Labour Law

The authorities have attempted to disrupt the strike and 8 activists, including the union president Chhim Sithar, have been detained since January 2022 and are in pre-trial detention at Correction Centre 2 (CC2) prison. They have been charged with incitement under the Articles 494 and 495 of the Cambodian Criminal Code. Bail requests for all of them were denied by the courts on 7 February 2021.

Another three union members, Choub Channath, Sao Sambath and Seng Vannarith were arrested on 5 February 2021, around 7:30 pm as they were leaving a Koh Pich COVID-19 testing site. They are charged with obstructing authorities’ health measures under the COVID-19 Law and currently in the pre-trial detention in Phnom Penh’s PJ prison. A public order to ‘bring in’ another four female LRSU representatives, Kheng Chenda, Ouk Sopheakmolika, Meng Kanika, and Eng Sreybo was also issued by the Deputy Prosecutor, compelling authorities to forcibly take the four in for questioning. The Phnom Penh Municipal Administration have also sought to stop the strike by banning assemblies in the capital to prevent the spread of COVID-19 and releasing written orders for the strikers to take COVID-19 tests.

The right groups are appalled that instead of seeking a resolution to the demands made by the NagaWorld union members who have been protesting, the authorities have arrested more workers and deployed the draconian pandemic law to disrupt the strike. The groups call on the government to respect the right to freedom of expression and peaceful assembly and to release all the union activists immediately and unconditionally.

Fundamental freedoms in Cambodia have deteriorated further since the beginning of the pandemic and besides the systematic misuse of ‘incitement’ laws, the Law on Preventive Measures Against the Spread of COVID-19, adopted on 5 March 2021, has added to the slew of repressive legislation currently being used against human rights defenders and journalists in the country. It gives the authorities power to impose hefty fines and disproportionate sentences of up to 20 years imprisonment for those who allegedly violate the COVID-19 measures, including restrictions on the size of gathering and other health protocols.

Human rights organisations have widely criticised the Law for providing another justification to curtail civic freedoms even further. The UN Special Rapporteur on Cambodia has also raised concerns on how the Law has been used as a tool to arrest hundreds of people and to stifle reporting and expression on the COVID-19 pandemic

In January 2021, the International Labour Organization (ILO), expressed deep concern over the arrests of workers and union activists and stressed the fundamental importance of respect for freedom of association while four UN experts condemned the arrests saying that “the pattern and manner of these arrests, after industrial action failed to be resolved quickly, appears to be an escalation in tactics used in previous cases that have occurred in Cambodia over recent years and resulted in the wrongful imprisonment of human rights defenders”.

CIVICUS and FORUM-ASIA urge the international community to stand in solidary the NagaWorld union workers, call out the violations against them and to demand accountability from the government of Cambodia as well from the company.

Civic space in Cambodia rated as Repressed by the CIVICUS Monitor