Swazi monarch a barrier to a vibrant civil society 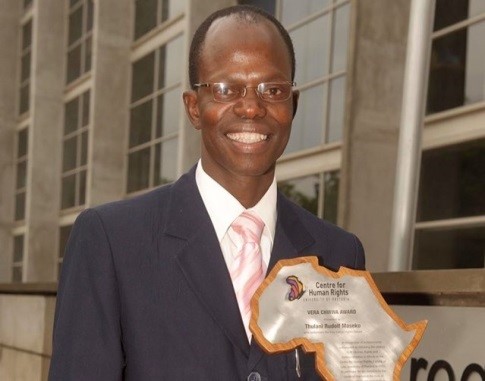 CIVICUS speaks to Thulani Rudolf Maseko, a human rights defender and founding member of the Lawyers for Human Rights, Swaziland about persistent civic space challenges in the Kingdom of Swaziland and his experiences as a victim of the actions of monarchy. He spoke to us on the sidelines of a side event on Swaziland at the United Nations Human Rights Council

1. What are some of the human rights challenges faced by Swazis?

The main problem for Swaziland is the lack of a democratic space for the people to express themselves. The system of government is one based on the supremacy of the King and royal institutions. It is now generally acknowledged that a system that concentrates power in one center is inconsistent with the ideals of the rule of law and democratic governance. Supremacy anywhere is not in line with the respect, promotion, protection and fulfilment of basic human rights and fundamental freedoms.

It is significant to mention that the problem with Swaziland started on 12 April 1973 when King Sobhuza unlawfully repealed the Constitution, dissolved Parliament and assumed all state and governmental power. His son, King Mswati III who assumed power on April 25, 1986 reaffirmed this position as soon as he had assumed the throne in 1987 when he promulgated Decree No. 1 of 1987. Through this amendment Proclamation, he confirmed that in terms of Swazi law and custom, the King is the supreme power in Swaziland.

This supremacy found its way into the 2005 Constitution as the King is seen to be above the law. Worthy of mention is that, in an environment where the rule of law is not upheld, human rights cannot thrive. And drafters of the Universal Declaration of Human Rights got it very right when they said that, “It is essential… that human rights should be protected by the rule of law.” Therefore, the interpretation of this is that without the rule of law there can be no human rights, and vice versa.

One cannot say that human rights defenders and CSOs are able to hold peaceful assembles freely. For in order to be able to do so, an enabling political and constitutional environment is necessary. Under the current Tinkhundla system of governance, peaceful assemblies are prohibited. They are not allowed because the very nature of the system is hostile and opposed to any form of free political activity. The only assemblies that are possible are those where CSOs are distributing food parcels to alleviate the poverty and hunger that are ravaging the country.

Meetings that are deemed to be anti-establishment are banned under the public laws of the country, and political parties, in particular the opposition party, the People’s United Democratic Movement (PUDEMO) which was arbitrarily listed as a terrorist entity in 2008, are not allowed to participate in the management of the public affairs of the country. This is done under the disguise that Swaziland is a no-party state. Yet the reality is that Swaziland is a one-party state, ruled by the Imbokodvo National Movement (INM) ─ the King’s political party formed in 1964. The philosophy, concept and policy of Tinkhundla as a system of government is that of the Imbokodvo party.

Under Tinkhundla, people are allowed to hold peaceful assembles only in so far as they do so within the confines and parameters set out by it. At the moment there is a plethora of proposed legislation meant to further restrict and deny the right to freedom of assembly and association as well as free expression. These proposed legislation are still in the form of Bills. They include the Public Order Bill (meant to repeal and replace the colonial Public Order Act, 1963), the Suppression of Terrorism Bill (to amend the Suppression of Terrorism Act, 2008), the Police Bill, Correctional Service Bill as well as the Tinkhundla Bill, meant to entrench Tinkhundla as a system of governance for Swaziland. In effect, these laws are meant to further narrow the space for human rights defenders, CSOs, the media as well as political parties.

3. Why were you put in prison by the regime and for how long?

I have found it quite difficult to speak about myself as that would appear to be beating my own drum. We are in the struggle to defend, promote and protect human rights not for ourselves, but for the people as a whole. So I do believe we were put in jail not because we had committed any criminal offence of contempt of court, or any other crime for that matter. Our offence was to express views that did not augur well with not just the then Chief Justice, but the Tinkhundla regime as a whole.

The entire government machinery descended on us and the evidence is documented in the judgment of the Supreme Court in the matter of The Chief Justice of Swaziland v Thulani Maseko and others*.  Here the Court observed that the coming together of forces between the Swaziland government (assisted by the office of the Attorney General) and the Director of the Public Prosecutions (and of course the judiciary itself) clearly indicated that the Swaziland government was serious about prosecuting us. The government wanted to show that if anyone stands up to it, then there are consequences that come with it and this includes being locked up in jail. This would have the intended result to instill fear in the hearts and minds of the citizens so that they do not stand up for their rights.

4. What has been the effect of your detention on civic space in Swaziland?

Those who were not in jail would better respond to this question. Our take, however, is that the effect was self-censorship on the part of many. No one in his or her right mind would want to go to jail, so when people realised that exercising your rights to freedom of expression particularly on issues affecting the powerful can lead you to jail, they turned to self-censorship. Following our detention, other activists resorted to self-censorship and this in effect meant the space for civil society to participate shrank further. The view that we hold is that, the intended chilling effect of our detention was to instill fear in the minds and hearts of citizens.

Others, however, may have been inspired to stand up and to defend, promote and protect human rights. For instance, there are those who stood with us and got arrested and charged while the trial was on-going. These include Mlungisi Makhanya, the Secretary of the opposition PUDEMO, who was charged together with six others at the High Court where the criminal trial was taking place. They stand accused of sedition and terrorism. So, some people were emboldened to stand up and demand reforms.

5. What are the three things that need to change in Swaziland to make the country free?

The three main things that need to change if the country is to be democratic and free, from a popular point of view are the following:

a.As a country we need to respect the rule of law: the rule of law is the basis for democracy, respect for human rights and democratic governance. Without it, Swaziland will remain the pariah state that it is. As the Universal Declaration of Human Rights states, it is the will of the people that should be the basis of the authority of government.

b.A new democratic Constitution: in order to achieve the rule of law, we need to have a new democratic Constitution that will be a product of an inclusive, participatory, accountable and transparent process. The problem with the 2005 Constitution is that it was pre-designed and imposed on the people. The pre-design of this Constitution appears from the Tinkhundla Review Commission of 1991. It also appears from the Constitutional Review Commission of 2000. The problem with this review process was that it was neither inclusive, nor participatory; it was neither accountable nor transparent; hence the end product is illegitimate and only reaffirmed the status quo.

c.The monarch and traditional institutions: A new democratic Constitution will place the monarch as an institution in a proper place in a constitutional state that is genuinely democratic. The monarch need not be partisan. The problem with Swaziland today is that we have a monarch that is unashamedly partisan and is opposed to democratic pluralism and the separation of powers, which is the pillar of the rule of law. Such a monarch becomes a symbol of oppression as opposed to being unifying symbol of the Swazi nation.