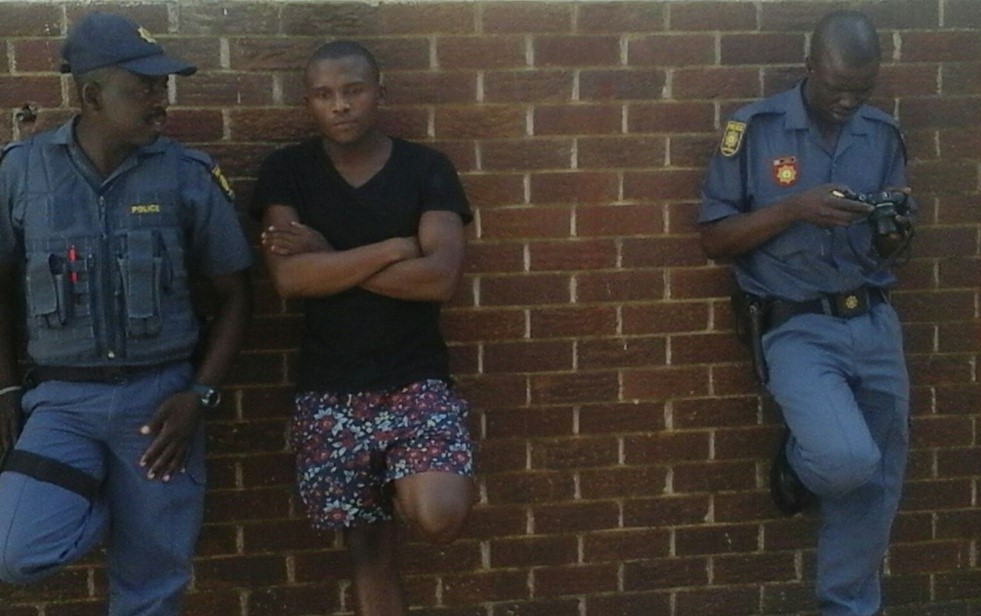 CIVICUS speaks to student activist, Mpho Ndaba who is also an executive member of 350Wits and blogger on recent protests that rocked South African Universities. Students this year marched on Parliament in Cape Town and the seat of government, the Union Buildings in Pretoria making various demands.

1. What are the issues that were behind the recent protests?

The fall of apartheid saw many promises being made to South Africans especially to black people who were most affected by the system of oppression and segregation. Although there was a sense of hope for a new path which would ultimately lead to complete emancipation, nothing appears to have changed.

Access to education has been one of the major challenges the poor have been faced with in the new democratic South Africa, hence 2015 saw the rise of students who are willing to lay their lives down in an attempt to ensure that the system does not put them in a position of disadvantage. Students from various institutions of higher learning embarked in a national protest action. This gave birth to what is today known as ‘Fees Must Fall movement.’

The movement identifies as being part of black consciousness, which means that we take into cognisance the fact that historically blacks have been put at a position of disadvantage by an oppressive system. By black we mean discriminatory experiences according to gender, race, sexuality and disability. We have seen the very white monopoly capitalist system going as far as taking our mothers, remunerating them so little but getting treated like slaves, we have seen black students being denied their right to education, we have also seen a university that is situated in the African continent being run and managed by white males without any fair representation of black women in our lecture halls or management positions. We have also seen our brothers and sisters being excluded on basis that, the socialisation structures such as religion, media and family does not accommodate them.  By this I mean those who identify as LGBTQIA+ (lesbian, gay, bisexual, transsexual, queer, intersex, asexual). Hence the Fees Must Fall movement can be understood as being a diverse movement.

In October this year, we embarked on protest action calling the University of Witwatersrand to do away with a proposed fee increase for the 2016 academic year. During the planning of the protest, we consulted different structures within the university including outsourced workers, academics and general staff. After the consultation we then decided that among our demands, the issue of outsourced workers will be put forward as we are advocating for an inclusive system which does not exclude anyone whether on basis of income, sex or the colour of their skin.

The fee increase matter became a short-term goal. As time progressed we realised that all the problems we are dealing with have in fact have to do with (the lack of) transformation. Free education and end to outsourcing became our long term goals.

The movement also advocates for a complete decolonisation of the institutions of higher learning and for change regarding patriarchy and the oppression of the women in our society.

2. Why did you resort to protest and marches and not use other avenues to negotiate the demands?

In that regard to why protest, I think looking at the kind of space where these events transpired, I could argue that, we have been having intellectual discussions from as early as 1994 (after South Africa’s independence). Even those who came before us have been advocating for and calling for fair representation of black women professors and lecturers at our universities. Our brothers and sisters have been calling for an end to outsourcing from as early as 2000 by engaging with the government’s Department of Higher Education as well as our universities but nothing substantial came out of it. Protesting and occupying the university’s central and administrative blocks seemed to be the only option.

3. Do you think free education is possible for South Africa as a developing country?

The fact that a large number of qualifying students are academically excluded each year is problematic because that means our rights to free and quality education are not being met. Our call for free education is not a new demand; we are merely holding the state to account for their promises. Of course there are questions as to whether what we are calling for is feasible, and in that regard, we are saying that the state should be able to find money to fund higher education. They should be able to reduce unnecessary expenditures. According to the Edward Nathan report by Corruption Watch based on documented fraud, it was found that the amounts involved grew from R130million in 2006/07 to over R1billion in 2011/12. Based on this, we are saying that the national treasury should look at its budget allocation processes in order to guarantee free education.

4. Have the protests been successful?

The protest has been successful in terms of showing students and the general members of our society how powerful being united is. We have now seen that, when we speak with one voice despite our political differences, we can actually shake those in power and show that it is the people who are the governors.

At Wits University, the management has agreed to put an end to outsourcing in principle. There also now exists a task team comprising of students, workers, academics, independent experts and other relevant stakeholders. The aim is to look at all issues relating to how the process of insourcing of workers can be fully implemented as soon as possible. At the same time, the university is still negotiating with the student movements on issues such as scrapping registration fees, doing away with student debt and ensuring the fair representation of black women in management positions and lecturing posts.

5. In your view was the response of the police respectful of the right to protest?

During the protest throughout the country, we saw the level at which the South Africa Police Services responded to us. In Cape Town, students were beaten up and some were arrested and were almost charged with treason (although this charge was withdrawn). We saw students being manhandled and physically attacked for demanding their rights in a democratic South Africa. I was also detained at Brixton police station during the University of Johannesburg protests together with 141 other students and workers.

The universities went as far as bringing untrained private security onto our campuses under the guise of protecting us.

After the infamous Marikana massacre where 34 miners were gunned down by the police, the Ian Farlam Commission made a number of recommendations with regards to policing and crowd control methods. Marikana was a clear example of inadequate training of the public order policing in this country. The application of force on us as protesting students, has made us feel that the state failed us, the university management failed us and Higher Education minister Blade Nzimande failed us because there could have been other legitimate ways of responding to our demands instead of calling for our arrest and silencing.

6. Are you concerned by recent pronouncements in Parliament that there was a “third force” behind the students and that you were not acting independently?

Instead of responding to the legitimate demands made by students, the South African government asserted that there was a third force in the nationwide protests. Well, that third force in this regard is poverty, inequality, exclusion of the black working class from the system and the increasing commodification of education in this country. We cannot sweep these issues under the carpet anymore, we cannot turn a blind eye to the fact that South Africa has the capacity to implement a system whereby free education is possible but rather, corruption and lack of accountability have become the order of the day if not the key defining features of our government.

7. What is the way forward now?

We have a long way to go as not all our demands have been met. The ultimate goal is to see a complete dismantling of a system that perpetuates exclusion of black people. It is Not Yet Uhuru! We want to see free education being realised, we want to see our mothers and fathers being able to earn fair wages, we want to see them being able to better their lives not only through fair wages but by being able to study at the very same universities they clean. We want to see a complete end to a patriarchal and misogynistic system that excludes and mistreats women. We want to see our LGBTQIA+ being fairly represented in different spheres of our society. There are those who came before us, now it’s our duty that, we ultimately see the changes which were advocated for in the past being made into reality in this lifetime.