Climate change as a matter of peace 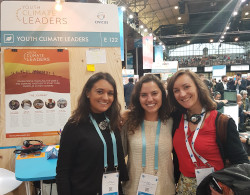 The Youth Climate Leaders (YCL) was honored to be selected to attend the first edition of the Paris Peace Forum, from 11th to 13th November, and to showcase our startup in the environmental village among other 119 projects from all over the world. Youth Climate Leaders would like to give a special "thank you" to CIVICUS for supporting us to attend the Paris Peace Forum. It was a well-organized and bustling event.

The opening ceremony was full of Heads of State, Heads of Government, and leaders of international organizations. It was a life-time experience to share the same room with President Trudeau, President Macron, President Putin, Chancellor Angela Merkel, UN Secretary-General António Guterres, Nobel Peace Nadia Murad, just to name a few. A crucial part of YCL mission is to enable young people worldwide to increasingly occupy those spaces.

President Macron opened the ceremony stating that the world is in a different path because in the centenary of the 1918 Armistice we had in the same room 84 heads of states peacefully reunited in Paris under the Arc de Triomphe. The Chancellor Angela Merkel stated that peace must be pursed, and the first step is to recognize that the world is facing severe crises. She emphasized the refugee crisis we are facing saying that countries must be united in order to solve the situation providing real support for those in need.

Additionally, the UN Secretary-General António Guterres highlighted that climate change is the biggest challenge of 21st century and that multilateral efforts are crucial for us to take actions as we are gearing up for COP24. He complemented Merkel saying that in the context of climate change, demography and migration issues are the second most important challenge of our century. It reminded me of the amazing lecture that Dr. Caroline Zickgraf gave to us in Paris about the intersection of climate change and the refugee crisis during the #YCL2018Immersion.

The main purpose of the Paris Peace Forum was thus to produce two primary outputs: testifying and mobilizing in favor of collective action and multilateralism, and advancing concrete projects of global governance. Altogether, the Forum featured three spaces: (1) a Space for Solutions showcasing governance projects in five “Villages” (peace and security, environment, development, new technologies and inclusive economy); (2) a Space for debates where initiatives from the Villages as well as cross-cutting themes were discussed; and (3) a Space for Innovation which invited developers and programmers to devise digital solutions for the identified challenges.

It was a difficult task to decide which discussion I should participate in, as there were so many interesting topics! Fortunately, the YCL stand was always full of people keen to learn more about our startup and we had the chance to network with amazing people from all over the world. For that reason, I did not have time to participate in a lot of panels, so I chose the panels “Finance for Climate: a Way to go Forward, a Way to go Faster” and “Fleshing out 2250: A Role for Youth in Global Stability”.

We had three intense days at the Paris Peace Forum, where we could foster important connections to strengthen our ability to solve the challenges mentioned by President Macron. I was happy to hear in the closing ceremony that the next edition of the Paris Peace Forum they will have more open spaces for youth. We were not well represented in many panels, both as speakers and participants, nor as project leaders showcasing projects in the Villages. On the other hand, I was proud to see organizers recognizing this issue and that in order to pursue peace and have a multilateral effort to solve the world problems the youth must be included.

So, I hope to see many of you on the next edition of the Forum!