Why do we need to #RewriteHerStory?

Female leaders in 2018 top films were 4 times more likely to be shown in revealing clothing. Did you notice? This is one of the striking findings of Plan International’s “Rewrite Her Story” research. 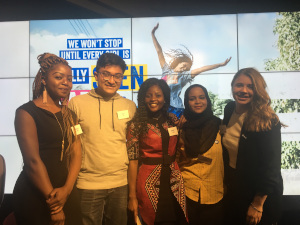 This new report is the second phase of a research project looking at female leadership. It focuses on the role of media in shaping girls’ and young women’s ambitions and aspirations to leadership and includes an analysis of 56 top-grossing films in 2018 across 20 countries.

The results resonate with our diverse experiences from across the world. We are a group of youth advocates advising Plan International on the Girls Get Equal campaign.

In Malawi, for example, most of the award-winning movies are directed by men, and most are about the plight of women. We see sad movies sensationalising women’s poor plight, and even female directors perpetuating stereotypes such as the cheating man with a sad stay-at-home wife waiting for his return. There is no space for the reframing of storytelling of women and girls.

If so few women are in these powerful roles, then how can girls perceive women as equally powerful as men? To young people, power in superhero movies is defined in “making the impossible possible”, with simple mechanics like shooting lasers out of one’s eyes. Women who are not superheroes will never shoot lasers out of their eyes – or feel they can tackle the impossible. This perception is internalized while growing up.

In Germany, decisionmakers in media tend to duck away from their responsibility to tackle gender inequality through ensuring equal gender representation. In Sudan, women with light skin tones, in passive roles, wearing a lot of makeup while serving as a background decoration are the preferred way to see women on screen.

These are just a few examples from the countries where we are from. In all of these countries and many others, it is clear that media is often the creator of public opinion, and is a great vehicle to influence gender roles. However, this relationship is often not recognized as a responsibility by stakeholders. How does this gap emerge? If a problem arises and the solution is at your hands, why not act?

Power-holders still attribute the responsibility to society and the consuming public itself. It is said that there is simply no demand for films with strong women but this is not true. The ‘Rewrite Her Story’ report shows that girls would love to see these inspirational characters. . We cannot expect change from consumers alone, it’s time to request it directly from the content creators.

Apart from finally acknowledging the responsibility of all involved in the film industry and creation of media content, certain inclusion targets need to be set. As Justin Trudeau recognised: “Diversity is a fact, inclusion is a choice”.

For the media landscape to perform an overall change, governmental involvement and collaborations with media stakeholders is required. Policies and legislation need to ban the constant reinforcement of gender stereotypes and make sure that the stories of the millions of women and girls of the world are being told.

Girls and young women need to be supported to create content and we need more women in media production roles. Let’s have more women superheroes and leaders and less obvious, stereotypical female characters. Media can be a very effective tool by intentionally breaking the stereotypes that diminish girls until it woman leaders and influencers are a realistic image for each and every girl.

Women and girls around the globe are heroes who drive solutions, and we need to show this in media and entertainment.

This Day of the Girl we are coming together in Stockholm for the annual Girls Get Equal Live summit where we will meet with decision-makers in the media and share these recommendations. We hope you tune in online and tell us how you want to #RewriteHerStory.

Kim from Germany, Memory and Matilda from Malawi, Razan from Sudan and Sifat from Bangladesh.