Keep moving until the departure of the corrupt 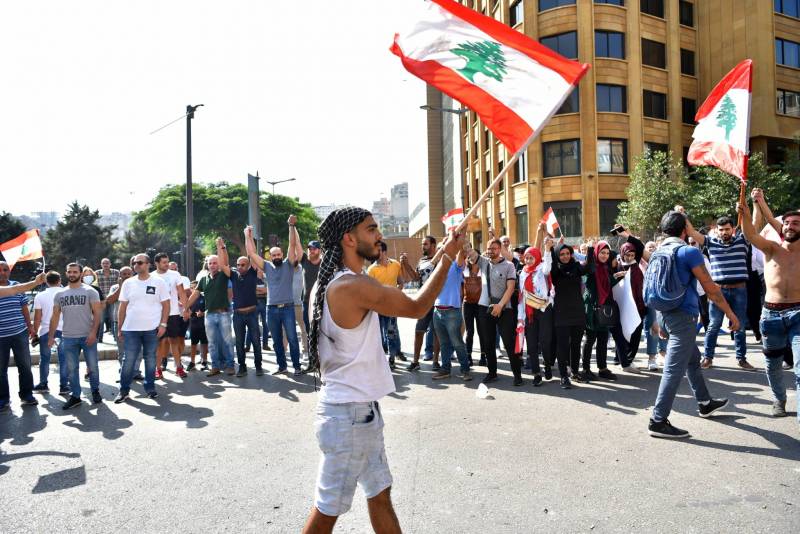 The popular protests in Lebanon began after the government announced its intention to impose new taxes on citizens and in an atmosphere of tension and mounting fears of continued economic collapse. The spontaneous movement was not surprising because it was an accumulation of anger and humiliation. However, it surprised everyone with its decentralization and rapid spread to all areas in Lebanon and abroad. The diversity of the parties involved in it was also surprising as it targeted all parties involved in governance without exception. The number of participants exceeded hundreds of thousands and in spite of this diversity, the unity has been maintained: the unity of slogans and positions, and unity reflected raising one single flag, the Lebanese flag alone.

In Lebanon, we are witnessing an economic crisis but political in nature as well. Indeed, the chants of the protesters show us that economic and financial reform cannot be achieved without addressing the structural imbalance in the political system based on sectarian quotas.

Since the Taif Agreement, it became clear that the cost of this quota system in Lebanon has been high for society and the state and came at the expense of citizens.

It is no longer possible to continue it without moving to the civil state. Political and economic reform is not possible in the presence of officials involved in the quota system because they will hold onto their privileges and interests and will not easily abandon them. Nevertheless, the protection of the corrupt sectarian system and guarantees through quota system came at the expense of enhancing citizenship, achieving development and activating participation. It is behind the weakening of the public administration, which is burdened with patronage and clientelism. This system has become a burden on the national economy and society, rather than being the catalyst in supporting and providing all its rights and serving to the people.

Therefore, the right approach in the long term can only be to abolish the system of sectarian quotas and the establishment of the civil state, the rule of law and the separation of powers, to strengthen the independence of the judiciary and rely on efficiency and enhance transparency and mechanisms of control, accountability and accountability. This requires the formation of a transitional technocrat government and the establishment of participatory mechanisms with civil society, independent experts and independent trade and professional unions. These mechanisms are supposed to reflect the movement and its space and those who abstained from participating in the elections.

The transitional government should work on two parallel tracks. The first is moving towards the adoption of a just democratic electoral law that achieves transparency and validity of representation. The second track begins by discussing the reform steps that allow the approval of the general budget, to eliminate wasteful public spending based on quotas, patronage and clientelism, and boosting the income.

Further austerity measures should not be proposed; but rather focus should be on a review of the social protection system and a fair distribution of the burden of reform to society. The next government should abolish monopolies, which are protected in the confessional system, especially in the basic sectors of oil, medicine, wheat and other markets and strengthen customs levies, especially on some consumer goods that are considered luxury. It should work on restructuring the public debt through negotiations with creditor banks to reduce interest rates.

It must achieve a fair and progressive tax system that addresses evasion and reconsider exemptions. New types of taxes should be imposed aiming at achieving justice and balance in revenues such as tax on land ownership and tax on the investment of marine and river properties. Customs exemptions and customs evasion (based on the control of land, sea and air crossings) should be reexamined as well.

Public sector should be restructured, starting with the abolition of public institutions and funds that are distributed among the sects. Restructuring of the wage mass in the public sector (in which 7% of senior officials are heads of departments and general managers account for 50% of wages in addition to additional compensation exceeding 50 times the wages in some cases) is equally important.

Only as such, Lebanon can send positive signals to the people and to the international community and restore the lost confidence of people in Lebanon to Lebanon as a sovereign and independent state.

To achieve all these, the street should keep on moving. The movement must coordinate to develop a new model of shared governance. A dialogue among its constituents on the requirements for continuation until the demands are fulfilled is critical. It is utmost importance that the movement should not give up, particularly with regard to any attempt to eliminate the power of mobilization. It must be aware of the traditional methods resorted by some of the forces of power who aim at wreaking havoc and abuse and create the justification for the security forces to use force. We have seen this since the second day in the streets of Beirut, where the security forces used tear gas and arrested hundreds of demonstrators in violation of the right to peaceful assembly, demonstrate and express opinion. The protection of the right to demonstrate and assembly is the responsibility of the security forces and the task entrusted to them.

This piece is an edited version of the article written by ANND Executive Director for Annahar on 19 October 2019.