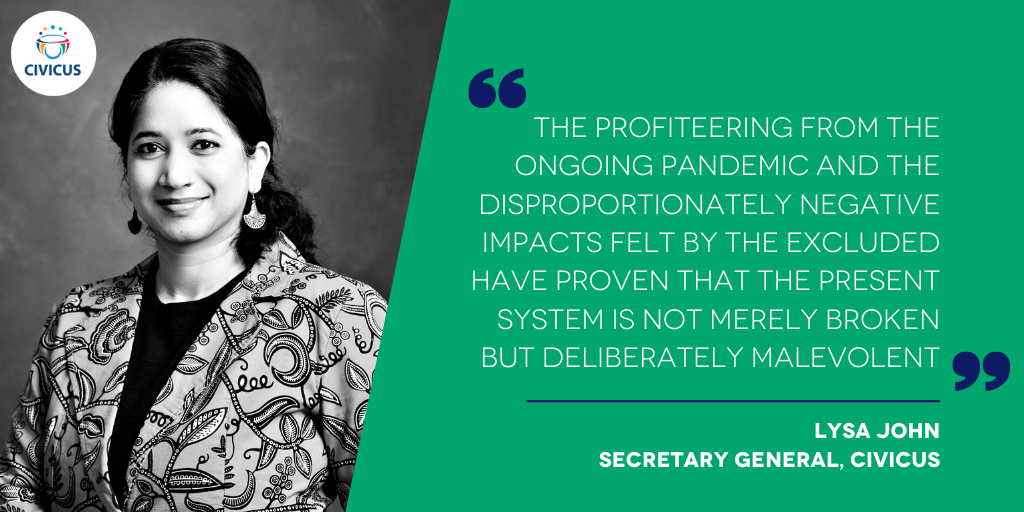 In May this year, we published the 10th edition of the annual State of Civil Society report. In addition to providing an overview of trends that have inspired civic action in the last decade, the report is full of examples of how, in country after country, public outrage has been provoked by deliberate policy choices made by governments. Such choices that have generated upheaval when seen as deliberately benefitting a small group of elite while blatantly ignoring or undermining the rights and needs of populations who already live in a state of deprivation and despair. If the financial crisis of the last decade signaled a broken economic system, then the profiteering from the ongoing pandemic and the disproportionately negative impacts felt by the excluded have proven that the present system is not merely broken but deliberately malevolent.

Across regions, protests have been spurred by indications that the pandemic is being used as a pretext to increase the economic hardship of ordinary people while creating obscene profits for politicians and private businesses. Oxfam has notably pointed out that the world’s ten richest men have seen their combined wealth increase by half a trillion dollars since the pandemic began. This amount could not only pay for universal coverage of the COVID-19 vaccine but also underwrite social protection policies to help ensure that no one is pushed into poverty by the pandemic.

Massive mobilisations, including in India and Iraq, have cropped up in response to government policies threatening to increase burdens on already overburdened populations. The brutality with which some governments have responded to protests by those seeking better labour rights and enhanced access to public services highlight the perverse nexus between the super-rich and the politically powerful in continent after continent, raising critical questions about the role played by vested interests in diluting mechanisms for democratic oversight on economic and political processes.

In several instances, public and civil society action led to course corrections. In Guatemala and Costa Rica, governments were forced to reverse austerity measures that were agreed as part of pandemic recovery packages with international financial institutions. In Indonesia, proposals to undermine environmental rights without adequate public scrutiny have been questioned. In Tunisia, mobilisations demanding economic safeguards for livelihoods threatened by the pandemic have been spearheaded by women and young people. While #BlackLivesMatter protests across the world forced public and private institutions to take a hard look at their own role in perpetuating systemic injustice, movements such as End SARS in Nigeria and #ZimbabeweanLivesMatter drew further attention to the misuse of state machinery to intimidate publics and restrict civic action.

If localised governance failures were a key provocation for public anger in 2020, then the inability to equitably resource and distribute the coronavirus vaccine may well be the trigger for long-lasting disenchantment with global governance and multilateral institutions. The Decade of Action promised by the 2030 Agenda is rapidly turning into a decade of impatience. As leaders and institutions patently look the other way, millions around the globe are discovering that people power is their only option.