Our right to protest will determine the freedoms of future generations 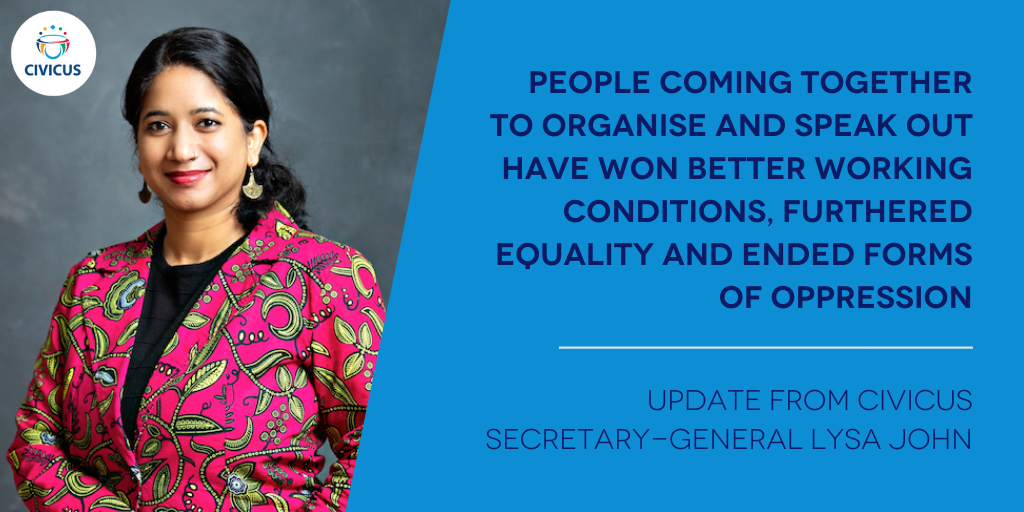 However, through the CIVICUS Monitor we have documented countless cases of people’s right to peaceful assembly being violated in various ways – through arbitrary restrictions that prevent assemblies from taking place; through violent or otherwise disproportionate policing of protests; and through bureaucratic regulations providing barriers to organising. Our latest brief on protest held around the world since the start of the pandemic records the use of excessive force against protesters in at least 79 countries, which includes the use of lethal force leading to the killing of protesters in at least 28 countries. In over 100 countries, law enforcement officers have detained protesters, often on the grounds of failure to adhere to COVID-19 measures or other laws related to peaceful assemblies.

There are at least four key challenges that the international community must urgently and collectively address in order to protect and expand the fundamental right to peaceful assembly. The first is the use of emergency laws to stifle protest. During the COVID-19 pandemic, blanket bans on protest have been imposed in the name of public health. This includes the stifling of assemblies in the run up to elections under guise of public health limitations. States have continued to curb civic freedoms without agreeing to sunset clauses that ensure the end of such emergency powers.

The use of internet shutdowns & other measures to restrict access to technologies is another challenge to the freedom of peaceful assembly. In the context of the COVID pandemic, more assemblies have moved online. However internet shutdowns or restrictions on internet data flows are being used to prevent the organizing, facilitation and or carrying out of assemblies online. Shutdowns have been especially deployed to target marginalized and at-risk populations, and often implemented hand in hand with other repressive tactics against protesters, facilitate abuses and gross human rights violations committed in the context of peaceful protests.

A third challenge is the use of Artificial Intelligence (AI) & surveillance to threaten protestors. With the growth in number and type of surveillance technologies available to governments, we have witnessed and increase in the use of digitally-enabled tactics to identify, harass and intimidate protestors. The role of tech companies in curtailing or enabling the right to protest also has implications for the oversight that needs to be exercised on businesses and their compliance with human rights. The use of financial restrictions is a fourth critical challenge to the right to freedom of peaceful assembly. Across countries, restrictions on garnering public support, both domestically and internationally, have been imposed on civic actors through laws on financial contributions, closures of bank accounts and other forms of reprisal or sanction. States must, instead, play a role to play in supporting and resourcing grassroots movements as part of their role as an enabler of public participation and civic freedoms.

What actions can we take to address these challenges? Firstly, we need governments to ensure that all laws and regulations limiting public gatherings based on public health concerns are necessary and proportionate. The public health emergency caused by COVID-19 must not be used as a pretext to suppress human rights. States must also ensure compliance with international frameworks that govern online freedoms by refraining from imposing online restrictions and allowing protesters to access information at all times.

Finally, all sections of the international community must work together to foster a more consistent application of human rights standards.  All instances of arbitrary arrests and the use of excessive force in response to protests must be publicly condemned at the highest levels; immediate and impartial investigations into such instances must be conducted with the assistance of international experts and independent civil society organisations.

There have been multiple examples of civil society and social movements across the world galvanizing positive change, defending hard-won democratic values and developing innovative practices to address issues of injustice, as also outlined in our annual State of Civil Society reports. People coming together to speak out have won better working conditions, furthered equality, ended forms of oppression. In light of the increasingly complex governance challenges that the COVID-19 pandemic has brought to the fore, we need state and non-state actors to be accountable to enabling the freedom of peaceful assembly and protecting those who exercise their right to protest and organise.

Lysa John is Secretary General of CIVICUS, based in South Africa.
Twitter: @lysajohn
This update is based on her remarks at the 48th session of the UN Human Rights Council.