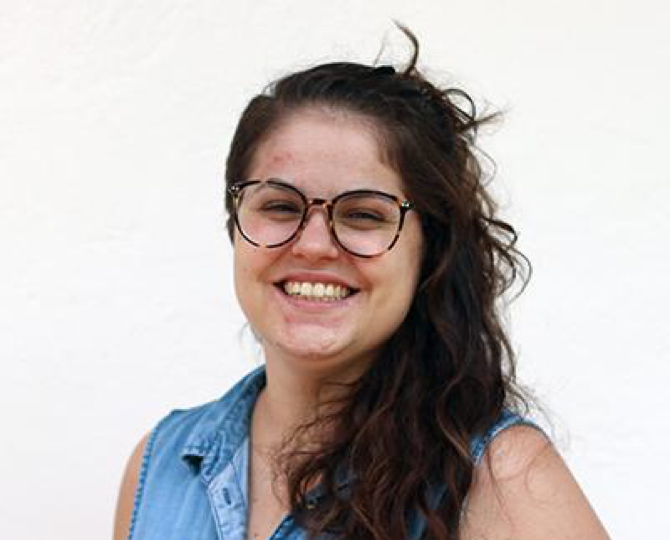 As part of our 2019 thematic report, we are interviewing civil society activists, leaders and experts about their experiences of backlash from anti-rights groups and their strategies to strengthen progressive narratives and civil society responses. CIVICUS speaks about migrant workers’ rights with Dariele Santos, the young founder of Instituto Alinha, a social enterprise focused on improving the work and life conditions of migrant workers employed in the fashion industry.

When and why did you decide to create the Alinha Institute?

When I was in college I had several jobs with which I supplemented my scholarship, and one of those jobs involved research on immigration issues, and more specifically about Latin American immigrants employed in the clothing industry in São Paulo. That’s when I began to speak with migrants and I learned about their precarious life and work conditions, that is, about the reality of the production chain in Brazil’s fashion industry.

Brazil encompasses all steps in the production chain of this industry, from cotton production to garment manufacturing. The fashion industry is spread throughout the country, but its final link, the manufacturing of clothing, is highly concentrated in São Paulo, employing mostly migrant workers. Production is highly outsourced; clothing brands subcontract with sewing workshops that are involved in the various phases of the manufacturing process. The more workshops that are involved in the process, the more difficult it is to exercise some control and the more labour protections are lost. Many of these workshops are small and family-run, and function in the family's home, with all members of the family working, and getting paid by the piece. People work up to 90 hours per week because they get paid very little for each piece that they produce.

When I learned the stories of these migrant workers, I began to realise the huge dimensions of the problem, and I also realised how little I had known about it, and how little we know in general about the fashion industry chain: we don't care the least about how the clothes that we wear are made. The problem of the huge inequality and injustice in the fashion industry chain is completely invisible. It is a super-luxury industry that generates a lot of money, but to the same extent, it is a chain of enormous exploitation.

Along with a friend, I started thinking about starting a social enterprise that would apply technology to solve this problem, and we launched Alinha in 2014.

What does Alinha do to improve the working conditions of migrant workers?

The idea is simple: Alinha provides advice to sewing workshop entrepreneurs so that they regularise their businesses and guarantee adequate security and reasonable deadlines and pay, and connects them with clothing manufacturers and designers interested in hiring a workshop, thus ensuring fair conditions for all parties involved.

More specifically, we begin by visiting the sewing workshops that sign up to receive advice, and we assess their deficits in order to recommend what they should do to get out of informality. We look at areas such as their forms of contracting, their health and safety conditions and their equipment. In our second visit we bring a work safety specialist. These workshops have a lot of fire hazards, because they store large quantities of cloth and tend to have precarious electrical installations; to make things worse, usually many children live in the houses in which the workshops operate. Once the safety assessment has been done, we prepare an action plan aimed at regularising the workshops or aligning them with labour and safety standards - hence our name of Alinha. We do it in plain language and translate the laws for workers. We provide the basics of accounting and help workshop owners calculate the required investment and how it would impact on product prices. Once the improvements have been made and we consider that a workshop has reached a minimum security and formalisation threshold, we upload its details to the Alinha platform so that it can get it in touch with brands and designers. Brands and designers come on our platform because they seek to change the way they produce and are willing to guarantee fair payment terms and deadlines. So we connect them.

The prices of these products are surely higher than those of products made under conditions of extreme exploitation. Have you managed to convince consumers that it is worth paying more for them?

We're on it. We know that it is important to connect consumers because they have enormous power in their hands: when choosing the brand they are going to buy, they can make the decision to support one that guarantees fair working conditions. But consumers can't really choose if they don't know which brands have contracts with our aligned workshops. That is why we have a platform where the aligned brands place data that users can check - for example, that they are making a certain number of pieces with such and such workshop, so that after the information has been added to the Alinha platform, the workshop can confirm on the phone that they are indeed making these pieces, earning a certain amount per hour, and working with such and such deadlines. When all the links in the production chain confirm the information, an identification code for the piece is generated to be placed on the garment’s label, so that the final user can track the garment’s history. All information and confirmations are stored in Blockchain, so that there is more security and trust in the information.

We are also in the process of making a short film that tells the story behind the clothes, based on the story of a Bolivian migrant seamstress. The presentation of an individual’s story seeks to generate connection and empathy: we want the consumer to see a woman who has dreams and hopes similar to their own. We seek to ask the consumer a question: which story would you rather choose, one about exploitation or one about decent work?

Do you think that the situation of migrants in Brazil has recently worsened?

The problem of migrants is not recent; it comes from long ago. There are many migrants who have lived here, and worked in terrible conditions, for decades. Migrants who work in sewing workshops in São Paulo are mostly Bolivian, although there are many from countries such as Paraguay and Peru as well. Many of them first emigrated from their countries to Argentina, but when the 2008 financial crisis hit they moved to Brazil. The political and economic conditions back then - the Lula government and a period of strong economic growth - made Brazil a better destination.

But it is difficult to be a migrant in Brazil. It is the only non-Spanish speaking country in the region, so difficulties in communication and access to information abound. Migrants without legal documentation or formal employment are afraid all the time. The psychological pressure is very strong: people refuse to leave the sewing workshops because they are afraid of being caught and forced to leave. Migrants fear the consequences of demanding their rights.

While the migrant workers’ exploitation is not a new problem, and migrants’ fear isn’t new either, the situation has recently worsened. The new president, Jair Bolsonaro, represents the far right, and his discourse is extremely xenophobic. He places himself above the laws and above all democratic guarantees. His message to migrant workers is: ‘be thankful for all the good things you have here, and if there is something you don't like, you’d better leave’. The fact that hate speech is coming from so high up is emboldening people who always thought these things, but in the past would not say them and now feel it is legitimate to do so. In this sense, discrimination and hate speech are becoming normalised.

This situation is replicated in various spheres. It is a dangerous time for activists working on human rights, environmental rights, women's rights, LGBTQI rights, black and indigenous peoples’ rights and migrants’ rights. There is a lot of fear because going against the government poses high risks. This has been clearly seen in the cases of Marielle Franco, the LGBTQI activist and councilwoman from Rio de Janeiro who was murdered in March 2018, and the LGBTQI congressperson and activist Jean Wyllys, who recently left Brazil because of threats against his life.

Fortunately, not all Brazilians are receptive to Bolsonaro's discourse. We live a situation of high polarisation. While many have indeed moved towards the far right and have adopted nationalist positions, many people are also increasingly convinced that what needs to be done is to guarantee more rights to more people.

In this context, what can rights-oriented civil society do?

Civil society moves within narrow margins. Our strategy is to generate a discourse that creates empathy among public opinion rather than a confrontational discourse permanently criticising the president because this would create trouble with a broad sector of society that would immediately reject it as leftist. We are going through tough times: it is not advisable to announce that you fight for human rights because human rights are associated with the left rather than viewed as things that belong to everyone. That is why we find it more productive to focus on real people and their stories, to show the photo of a flesh-and-blood person and ask our audience, 'don’t you think this woman is a hardworking person, who is struggling just like you, and who deserves better working conditions, who deserves to get ahead?'

It is really quite tragic to have to hide the struggle for human rights because it is not seen as a legitimate cause. Since President Bolsonaro was elected, a lot of activists have had to leave Brazil. Those who have stayed are being forced to choose: if they want to continue doing a direct, head-first kind of activism, they need to be willing to take risks. Nowadays, mine is a sort of diplomatic activism: I sit down to speak with businesspeople and I need to be open to chat with people who don't necessarily think like me or do things the way I think they should be done, but with whom I can achieve some progress.

Although it may not seem obvious at times, because Brazil is considered a medium-high-income country, Brazilian civil society needs all kinds of support to continue working in this hostile environment. In my particular case, I was very fortunate to receive support from the Goalkeepers Youth Action Accelerator programme, which seeks to accelerate progress towards achieving the Sustainable Development Goals (SDGs). This programme supports a group of young activists who are using data in innovative ways to address SDGs 1 to 6, that is, to seek solutions to local development challenges related to poverty, hunger, health and well-being, education, gender equality and water and sanitation.

This support has been super strategic, since it included funding, technical support and connections, and allowed me to acquire new tools. Many more initiatives like this are needed, because Brazilian civil society is shrinking, and not only because of the political climate but also because of the economic crisis that has been going on for several years. According to a recent study, more than 38,000 civil society organisations closed their doors in Brazil between 2013 and 2016, and many of them used to provide basic services to vulnerable populations. The segment of civil society that has suffered the most is the one working on development and human rights advocacy: more than 10,000 organisations that closed down used to work in favour of minorities, such as black people, women, indigenous people and LGBTQI people, and the rights of communities.

Civic space in Brazil is rated as ‘obstructed’ by the CIVICUS Monitor.

CIVICUS speaks to Htoon Htoon Oo, a refugee and activist from Myanmar, currently based in...