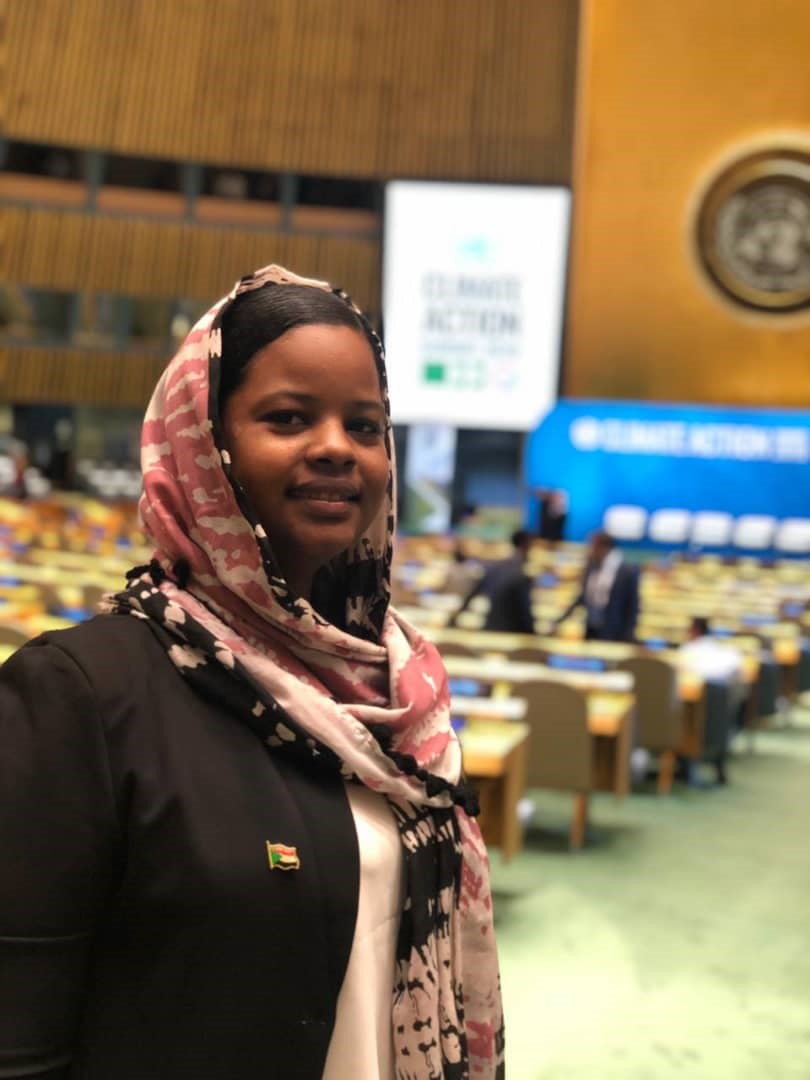 CIVICUS speaks to Nisreen Al Sayeem, Chair of the Sudan Youth Organization on Climate Change and Coordinator of Youth and Environment - Sudan (YES). Nisreen is a junior negotiator at United Nations (UN) Climate Talks for the African Group of Negotiators and a co-organiser of the UN Youth Climate Summit. Nisreen speaks about how young people in Sudan are organising to respond to the climate crisis using the traditional Sudanese concept of Nafeer – collective voluntary action – to provide solidarity and assistance to villages affected by floods, droughts and desertification, and about how young people from Sudan have successfully fought to have a seat at the negotiation table at UN climate talks.

How did you become a climate change activist?

I’ve been doing climate change and environmental activism since 2012, which is seven years now, since my first year of university. Nowadays in Sudan, people's awareness of climate change is definitely different to when I started in 2012. Even policy-makers have a different perspective on climate change issues now, and all the agencies have climate change programmes. Unfortunately, not much has changed regarding UN climate negotiations. UN member states needed 21 years to reach the Paris Agreement, so you can imagine how slow things are still.

I’m a physicist. I studied physics and I love science very much, but I have realised that unfortunately, without policy-makers, policy papers and policy-making processes, science doesn’t mean anything. I started working in the climate change field because I wanted to see the link between the science and the policy.

How are young people in Sudan engaging with climate change?

Young people in Sudan are taking three different paths for climate action: policy, activism – including advocacy, campaigning and work in civil society organisations – and community-based work. Community-based work is what the majority of young people in Sudan are doing, because they realise that policy-makers are not quick enough and civil society work is not inclusive enough, so they are doing the government’s job in many places and also doing the humanitarian’s job in other places.

There is an initiative called Nafeer, which has been a tradition in Sudan since forever. When there is a problem, people join together and try to solve it. Because of climate change, we started witnessing severe rainfall. This caused floods, which completely destroyed more than 18 villages, killed 68 people and left more than 184,000 people homeless. So young people decided to take action. They started delivering humanitarian aid, helping people who were hurt and providing food, shelter and medicines, because the water was contaminated and there was a diarrhoea outbreak.

Young people also wanted to show solidarity, sharing their sadness and their tears with the people from the flooded villages, and showing them that they were not alone. Even if most of the people who participated in the initiative were not really affected by the floods, the youth of Sudan are still the same, brothers and sisters, and whatever happened to you also happened to me, and with this concept and this spirit, we did it after three months of flooding and tears.

How else is the climate crisis affecting Sudan, and how have people provided community support?

In Sudan, livelihoods depend on natural resources, and because of climate change seasons are mixed now. Autumn is late, winter is early and summer is early. Now we have a lot of conflicts between farmers and pastoralists over land, resources and crops. We have had very unfortunate events in the east of Sudan where two tribes, one of farmers and one of pastoralists, fought between each other. In 20 days we lost about 180 people in this conflict. We have many conflicts over natural resources but in this case people from both tribes who were educated enough to see that fighting was not a solution made a 15-mile wall to separate the tribes.

Desertification is killing their land, so they are not able to do any agriculture activities or even pasture their cattle and you know how frustrated you are as a parent at home if you have kids and you cannot bring food to the table. In some villages you find animals and people drinking from the same sources. More and more people are moving to the capital and leaving rural areas deserted. As you can see, things are very complicated: climate change is no joke or a way to push the government to do something; even the government is affected by climate change in a country like Sudan.

What do you think about the climate strike movement?

Although it is a very progressive thing to hold strikes in global north countries, in a country like Sudan, going to school is a privilege for a lot of students, and it doesn’t make any sense for people to strike from a school they got into after a huge struggle. So I haven’t been focusing much on the strikes. But I really think it’s affecting the global north countries and I think it’s impressive. For us we have other different ways of taking action.

You are now a climate negotiator and have secured places for Sudanese young people in the government delegation at UN climate talks. How did you achieve this?

This network advocated very hard with the Ministry of Environment and its minister. After a huge advocacy campaign to include civil society in the delegation to climate change negotiations at the Conference of the Parties (COP) and the inter-sessions in Bonn, the minister agreed to give each organisation two badges out of a total of 24. We then started a small campaign within the Climate Change Network to give young people at least half of the 24 badges. We didn’t get 12 but we got seven.

And then with other young people from Africa we pushed towards having a young negotiator programme within the African Group of Negotiators (AGN). We discovered that the AGN had already established a programme because they needed junior negotiators. A lot of the older negotiators are passing away and to guarantee the sustainability of both the negotiation processes and the AGN itself, there was a need to replace this capacity by bringing in more young people, since the climate change fight will not end any time soon. Now I am one of the negotiators for the AGN, and my friend Lena Hussein is the Middle East and North Africa region negotiator for Climate Tracker. So, in total we now have nine young people from Sudan. Our number is increasing because we have proven ourselves, so now they know that we have the capability they are giving us more space.

You helped organise the first UN Youth Climate Summit in September 2019. What are your thoughts about the Summit, and what comes next?

When you organise the first edition of any huge summit like the Youth Climate Summit, some things might not go as planned. In this case, the general atmosphere was very promising. From my point of view, the only issue was the output: what were the actual conclusions and recommendations of this summit, and how are we going to take these forward? These recommendations need to be taken forward. As one of a group of 30 young organisers, I have many plans for many other forms of engagement, including with the UN Youth Envoy’s Office.

What do you think will be the big issues for you at COP 25 in Chile this December?

Regarding negotiation topics at COP 25, we have a huge issue with loss and damage. After I saw what happened here in Sudan, and after I saw how massive the destruction has been in many other African countries, I think that loss and damage is a huge theme for us. For example, in the USA you can have a disaster and because the country can handle this, they can repopulate the area in a month, whereas in Sudan it takes at least two or three years to recover because we really don’t have the capacity to predict or prepare, and after it’s happened, to rehabilitate the affected areas. So loss and damage is a key area for us. I will also follow the Agriculture Agreement, and Climate Finance is and always will be a big deal at negotiations. Every plan, everything that we want to do, is very much linked to the finance issue. Without funding you can’t do anything, and it doesn’t make any sense to plan for something that is not going to happen because there is no money.

Civic space in Sudan is rated as ‘closed’ by the CIVICUS Monitor.

Get in touch with Nisreen through her Facebook page.

CIVICUS speaks about the challenges faced by climate activists in Australia with Nelli Stevenson, head of...

CIVICUS speaks with Rinaani Musutua of the Economic and Social Justice Trust (ESJT) about thee...