ARGENTINA: ‘We must stop attempts to go back to the injustices of the pre-pandemic era’

CIVICUS speaks about the COVID-19 crisis and civil society responses with Sebastián Pilo, co-director of Civil Association for Equality and Justice (Asociación Civil por la Igualdad y la Justicia, ACIJ), a civil society organisation (CSO) dedicated to defending the rights of the most disadvantaged groups and strengthening democracy in Argentina. Founded in 2002, ACIJ aims to defend the effective enforcement of the National Constitution and the principles of the rule of law, promote compliance with the laws that protect disadvantaged groups and the eradication of all discriminatory practices, and contribute to the development of practices of participatory and deliberative democracy. 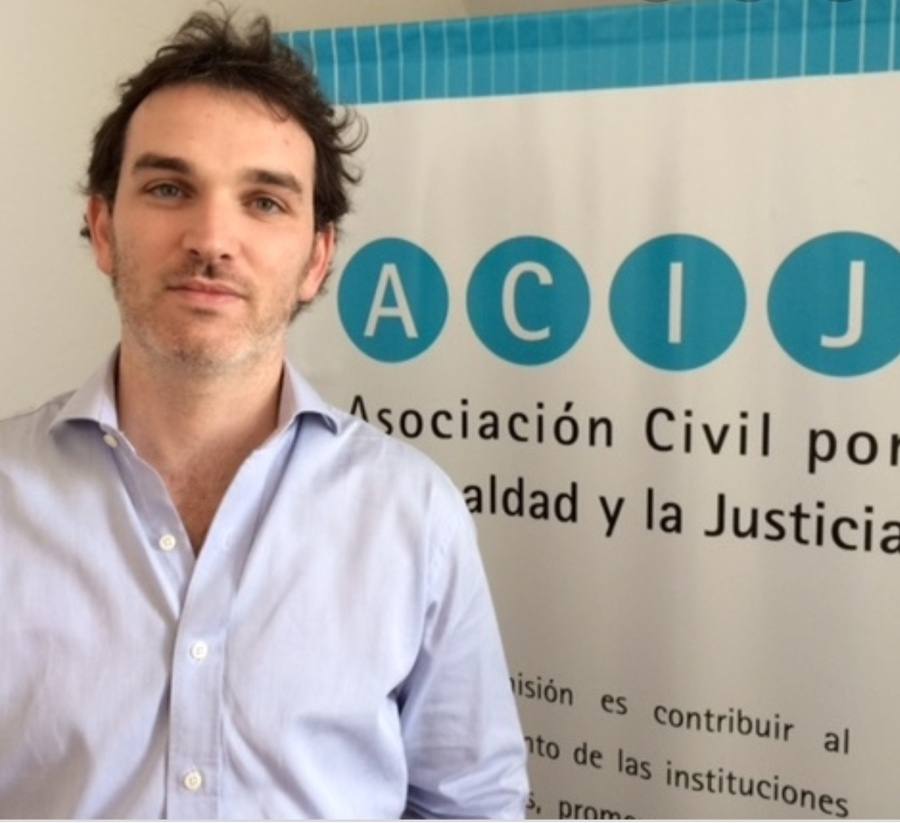 What impact has the COVID-19 pandemic had on people’s rights in Argentina?

Notwithstanding the good results in terms of health yielded by lockdown measures, the pandemic has hit the most vulnerable populations especially hard. To cite just a few examples, the impact of contagion has fallen significantly on the inhabitants of informal settlements. Institutionalised older adults have also suffered the pandemic in a particularly cruel way. In addition, cases of domestic violence have presumably increased under lockdown conditions.

The fact that people whose right to adequate housing is not being fulfilled are being asked to ‘stay home’ is a clear example of the gap between constitutional promises and reality, as well as the interrelation between the right to health and other fundamental rights. In this regard, in mid-March, as mandatory lockdown had just begun, alongside other CSOs we submitted a document to the City Government of Buenos Aires warning of the lack of adequate public policies for people living on the streets, a group especially vulnerable to the pandemic. Although the city government announced measures to mitigate the spread of COVID-19, the actions were mainly aimed at controlling the circulation of this population, but not at guaranteeing their access to adequate hygiene and health conditions. The causes that lead to people becoming homeless are structural and linked to the lack of public policies guaranteeing all people access to decent housing. The actions taken during this emergency should be a starting point to build long-term policies to change the precarious conditions in which thousands of people live in our city.

More generally, in the context of the pandemic the multisectoral initiative Habitar Argentina has called for the implementation of a national emergency policy on habitat, aimed not only at improving the living conditions of people who are already on the street, but also suspending – for six months or until the pandemic is over – all evictions and judicial decisions that may expel more people onto the streets or worsen their sanitary conditions, as well as implementing specific policies for families who rent, have mortgages or live in precarious housing. It also calls for the implementation of protection mechanisms for women, children, adolescents and sexual minorities or gender non-conforming people who experience violence regardless of the type of housing or territory they inhabit.

What obstacles has ACIJ faced to continue operating in this context, and how have you overcome them?

Our biggest obstacle was linked to lockdown measures and the consequent impossibility of maintaining, under the same conditions, our territorial presence in the communities with which we work. This forced us to increase our efforts to continue in contact – virtually or through authorised sporadic physical presence – with community leaders and promote actions aimed at providing the special protection that the context required.

Thus, for example, along with Fundación Huésped and TECHO, we organised a series of training sessions targeted at grassroots leaders, who have historically been key to solidarity networks in their neighbourhoods. Staring on 5 June, we held five meetings to provide them with information on prevention measures against COVID-19 and other diseases present in their neighbourhoods, legal information pertaining to compulsory lockdown, guidance in the event of institutional or gender-based violence and prevention measures for community soup kitchens, and to let them know about the public assistance programmes that were established during the pandemic. More than 90 social leaders from the provinces of Buenos Aires, Chaco, Córdoba and Tucumán took part in these meetings.

A virtual assistant with specific information was also developed to answer queries from inhabitants of poor neighbourhoods and a series of communication pieces were distributed through community WhatsApp and Facebook groups.

What other actions have you undertaken to defend the rights affected under the pandemic, and what have you achieved?

Among the most relevant actions that we have undertaken during these months, I would highlight the following.

First, regarding the inhabitants of slums and informal settlements, we promoted a special protocol of action against COVID-19, the creation of a web platform that geo-references resources and helps identify the urgent needs of these inhabitants and a precautionary measure so that the state would provide free internet access for the duration of lockdown measures.

The internet access development came in response to a lawsuit that we filed with other CSOs in order to enable the continuity of schooling for all students within the framework of distance education measures established during the emergency. The precautionary measure issued in early June forces the Government of the City of Buenos Aires to provide all students who attend public schools or privately operated schools with zero fees and who are in a socially vulnerable situation – those on city or federal welfare, scholarships, subsidies, or social programmes, or those who live in slums – an adequate device – a laptop, notebook, or tablet – to access the internet and carry out schoolwork in order to guarantee the continuity of learning. Likewise, the government is obliged to install in all the slums and informal settlements within the city the required technological equipment for wireless internet transmission, similar to that which it currently maintains in squares and public spaces, in sufficient quantity and adequate locations in order to provide a minimum standard of free wireless connectivity. In the event that there are technical impediments to this, the local government must provide a mobile device with data to allow internet access to every family including children or adolescents who attend primary-level educational establishments.

This measure is key because not only does it seek to reverse the existing inequality in terms of access to educational equipment, but it also recognises internet access as a fundamental right that is instrumental – and, in this context, essential – for the exercise of other rights such as rights to education, health, information or access to justice.

Second, regarding people with disabilities, among other things, we denounced the reduction in assistance coverage, carried out a campaign to show the effects of confinement on people secluded in mental hospitals and launched a web platform to foster access to rights.

The discapacidadyderechos.org.ar platform was launched in early July and seeks to help people with disabilities demand the fulfilment of their rights to health, education, work, independent living and social protection. The platform centralises information regarding rights, benefits and services recognised by current regulations, and outlines how to claim these rights in cases of noncompliance by insurance and prepaid medicine companies and the state and where to go for free legal advice and sponsorship. The site has a total of 120 document templates, including administrative notes and document letters, that each user can adapt to their situation. In addition, it has a specific section that provides information on the rights of people with disabilities in the context of the COVID-19 pandemic.

It should be noted that the process to develop the site included the participation of people with disabilities and their families, who tested the platform and made suggestions for its improvement. It was also based on the advice of specialists in digital accessibility and usability.

Third, for vulnerable groups in general, alongside a coalition of academic institutions and CSOs, we started an initiative to disseminate legal information to clarify the scope and impacts of emergency regulations and contribute to the legal empowerment of various disadvantaged groups, and we made a regional call to highlight the role of justice in the face of the crisis. We also prepared a document highlighting key information about injustice in tax matters and ideas to contribute to a fiscal policy that respects economic, social and cultural rights in the context of the pandemic.

What would you say has been the key to obtaining these achievements?

I believe that the achievements obtained in this context are fundamentally explained by the combination of three variables: first, the entire ACIJ team was mobilised by the need to make a significant contribution from our institutional role, and adopted the necessary flexibility to react to the crisis in an appropriate way. Second, for a long time we have worked closely with affected communities and groups in relation to the issues that are at the core of our work, and this has been key to us knowing first-hand the obstacles that people in vulnerable situations face in accessing their rights. Finally, the combination of strategies of public policy advocacy, court action on collective conflicts and community empowerment resulted in larger impacts than those that would have been obtained in the absence of this interconnection of strategies.

What role should civil society play in overcoming the pandemic and building a better post-pandemic ‘new normal’?

The first thing that civil society must do in this context is to show very clearly the injustices that characterised the world that we had before the pandemic: political inequality as a structural condition of low-quality democracies; economic inequality as underlying violations of economic, social and cultural rights; and a model of production of goods and organisation of territories that was environmentally unsustainable.

Given that the pandemic has deepened pre-existing inequalities and has had greater impacts on the lowest-income people, the current priority should be to strengthen public systems for the protection and promotion of human rights of the groups most affected by the pandemic. In this context, it is essential to guarantee resources to fund adequate health and social protection policies. Hence, together with other CSOs in the region, we published a statement urging states to implement mechanisms to achieve a globally progressive tax system; evaluate existing tax exemptions to determine which ones should be eliminated because they are unjustified and inequitable; not to approve new tax privileges, except in urgent cases, where effectiveness is proven and preferably for the benefit of vulnerable populations and small businesses; and reform and streamline the process of approval and review of tax expenditures, increasing transparency, identifying beneficiaries, adding impact evaluations and subjecting them to independent scrutiny.

It is essential for civil society to help us imagine a new direction: the moment of crisis is also a moment of opportunity if it stimulates our ability to think of different ways to relate to each other as a political community, and to instil new values for the reconstruction of fairer societies.

Finally, we must accompany those who will go through the most difficulties to find survival strategies and satisfy their basic needs, while also looking for participation spaces to make our voices heard in public decision-making spheres and countering the foreseeable attempts to go back, in the post-pandemic stage, to the injustices and privileges that characterised the pre-pandemic era.

CIVICUS speaks about the political crisis in Peru with Nadia Ramos, CEO of the Women’s Leadership Centre...