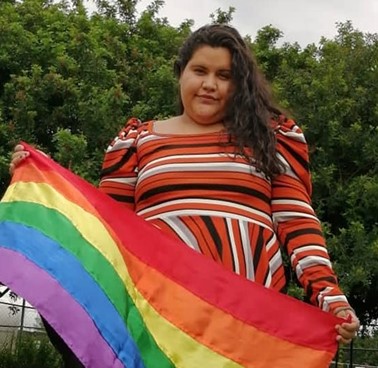 CIVICUS speaks with Erika Venadero about the recent extension of same-sex marriage rights to all of Mexico’s states and the ongoing campaign to realise LGBTQI+ rights in Mexico. Erika is a sexual diversity human rights activist in the state of Jalisco and a member of the National Network of Diverse Youth (RNJD), a coalition of LGBTQI+ youth rights groups from across Mexico.

What work does RNJD do?

RNJD is a space that was born out of the 2019 Consultative Youth Parliament, where a Youth Law was discussed.

As young people we had no legal recognition. We had never been considered as subjects of rights. The people in charge of making the laws and dictating the rules according to which we should lead our lives are adults, even quite old adults, and mostly men. Not surprisingly, they do not understand and prioritise our interests and needs, and instead legislate for adults, and especially for adult men. Hence the need to demand that we be recognised as young people and, above all, as diverse young people.

Only recently has our network become formalised as a civil association. We are only three years old. Nevertheless, we have engaged in the recent process to legalise same-sex marriage.

While most of us don’t wish to enter into a civil union, proving our relationship to a public official with signatures and other formalities, we know there are people who wish to have this experience, and exclusion from this right is accompanied by many other forms of exclusions Even if we don’t want this, or don’t want it at this point in our lives, we know that other LGBTQI+ people do, and that the denial of this right is part of what makes LGBTQI+ people second-class citizens.

What was the process leading to the legalisation of same-sex marriage like, and what role did civil society play in it?

The struggle for the recognition of the symbolic union between two people who love each other – simply two people, as the current law puts it, without any gender markers – began many years ago, and progressed thanks to the work of individuals and groups who pushed to extend this right to all people.

LGBTQI+ people are treated as second-class citizens simply because we do not comply with socially established norms that privilege heterosexual relationships. Laws are written and implemented, and all political and social spaces are created, occupied and run by heterosexual people. So this struggle began with a reflection about our lack of representation and visibility in various spaces: personal, political, social and work-related, among others. We have the right to live a full life, but the hegemonic practices that are imposed on us prevent us from living a free life due to the simple fact that we are who we are and love who we love.

The legalisation of equal marriage in Mexico has been a victory for civil society, and specifically for LGBTQI+ collectives and their allies working with LGBTQI+ people day in and day out. Through their daily work on the streets and in every space, they shifted opinions and reached agreements for the recognition of our rights to be taken forward to the political level of decision making.

That is why RNJD has been present throughout the process, from the early drafts of the law to parliamentary debates and votes. These are debates that can go on for a long time. As they deal with ‘sensitive’ issues, some political sectors will try to postpone votes indefinitely in the hope that the issue will fade into oblivion. That is why it was important for RNJD to stand firm to demand these bills be discussed and voted on. We will continue to stand firm for the laws to be implemented.

Have you faced anti-rights campaigns or any other form of backlash?

Every time LGBTQI+-related news comes out, the response is an avalanche of diversophobic comments. Our very nature makes some people uncomfortable. All our lives we have been forced to live under heterosexual norms, so we have faced anti-rights expressions for as long as we can remember.

During the recent process to change the law we have faced an intense anti-rights campaign. Not only do anti-rights groups insult and attack us, they also denounce our publications on social media and have sometimes managed to have them removed. We activists suffer constant personal attacks and our social media accounts are frequently blocked. In my case, for instance, an anti-rights group once attacked me so much and reported my profile so many times that Facebook took it down. It’s really hard to understand what it is that bothers them so much.

Lots of people express hatred towards us. Many keep close watch of everything we do and every single thing we upload, both on the RNJD page and on our personal accounts.

Clearly people already know who we are and what we do. The network is extremely active and visible in social, political and cultural spheres. We have had very tense internal discussions about the double-edge sword of visibility. Our work has made us visible to both those who hate us and those who are willing to get information, learn about our work, understand what we are about and eventually support us. I prefer to focus on those who come to us for information rather than those who throw their hatred at us.

To confront anti-rights movements and hate speech, our strategy is to generate alternative narratives. We even use humour to disarm their arguments. For instance, we suggest that they love the traditional heterosexual family so much that they feel like having two of those – a reference to infidelities and what is colloquially known in Mexico as the ‘big house’ and the ‘small house’. These response mechanisms have helped us provoke dialogue.

What are the next steps after the legalisation of same-sex marriage in Jalisco?

The idea that equal marriage is now legal in all Mexican states and LGBTQI+ people can marry just about everywhere is simply not true.

Although the bill has been voted into law in Jalisco, the civil registry manual continues to define marriage as a union between a man and a woman. As long as local legislators do not change this, many civil registry officials will continue to resort to this text to deny LGBTQI+ people access to equal marriage.

In addition, several Mexican states have passed and implemented equal marriage laws years ago, despite which many obstacles still remain. Legal change does not bring instant social change. Hence the importance of continuing to focus on cultural change. Laws can change very quickly, and they do change overnight, but culture does not, and we must not forget that those who manage civil registries are people who have been socialised in a certain culture. Even if they are public servants and must apply the rules emanating from the state, they may also have particular religious or moral convictions. Changing these takes time. The process of cultural change is extremely slow, but we need it to happen to unlock all the locks.

What other challenges do LGBTQI+ people face in Mexico, and what else needs to change?

LGBTQI+ people in Mexico face many, many challenges, largely as a product of overlapping vulnerabilities and inequalities. For example, the same issues that affect women in general also affect LGBTQI+ women: the fact that we are lesbian, bisexual or transgender does not mean that we are not women and cannot become pregnant. But in most of Mexico it is still not legal to voluntarily terminate a pregnancy, despite what the Supreme Court has said about it.

Another huge problem in Mexico is that of enforced disappearances. Jalisco, my state, is one of the states with the highest numbers of disappeared people – and LGBTQI+ people are among the disappeared.

Another pending issue is the Care Act, currently blocked in Congress. LGBTQI+ people need safe spaces to inhabit, grow up and grow old. All our research, all our statistics indicate that LGBTQI+ people in Mexico are alone and largely unsupported.

A specific problem for LGBTQI+ people is so-called ‘conversion therapies’. These consist of inhumane and degrading acts aimed at suppressing diverse sexual orientation, that is, aimed at eliminating our true selves. I have personally experienced ‘corrective rape’. My aggressors, people who claimed to be followers of the word of God, told me that they were ‘making me a woman’.

Centres offering ‘conversion therapy’ operate throughout Mexico and do so legally. Legislation is currently being discussed at the national level to put an end to these therapies, but in the meantime these places continue to operate. In Jalisco, the centres that carry out these practices only need to register and pay a monthly fee. A simple formality and payment enables them to commit countless atrocities.

Another pending issue is that of the recognition of gender identity, especially regarding children. Several states have laws granting trans people legal recognition of their self-perceived identity, but many more have not yet started moving in that direction.

As much as we continue to fight and mobilise, we may not see all these changes materialise, in which case we will have done it for the generations coming after us. We are creating spaces for the future in the same way that others did for us since the 1980s. We will make sure that things keep moving forward.

Civic space in Mexico is rated ‘repressed’ by the CIVICUS Monitor.