GLOBAL TRENDS ON CIVIL SOCIETY RESTRICTIONS: THE GAP BETWEEN RHETORIC AND REALITY 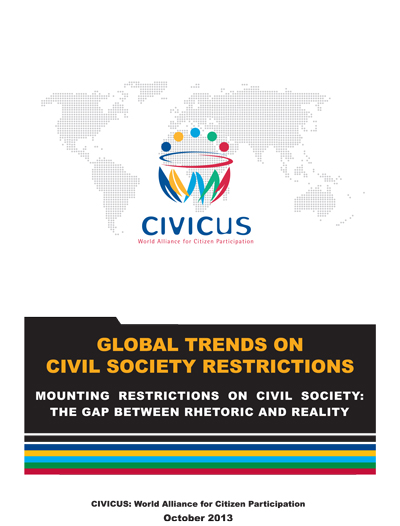 A report by CIVICUS, reveals a pattern of sustained attacks on civil society organisations (CSOs) around the world.

CIVICUS has tracked 413 threats to civil society in 87 countries since the beginning of 2012. Worryingly the report shows that several governments are attempting to weaken civil society organisations by enacting laws which prevent them from accessing the funding they need to survive and prevent them from conducting legitimate activities involving expressions of democratic dissent.

“We are hugely concerned about the killings of land rights and environmental activists in Latin America and Southeast Asia due to collusion between politicians and big businesses. Equally, defenders of rights of women and the gay community are facing severe threats in the Middle East and Africa respectively,” said Danny Sriskandarajah, CIVICUS Secretary-General.

The report highlights that governments have failed to honour their commitments to guarantee an ‘enabling environment’ for civil society made at the 4th High Level Forum on Aid and Development Effectiveness in Busan, South Korea in December 2011. Restrictive laws, targeted assassinations and imprisonment of activists as well as attempts to shut down organisations exposing corruption and rights violations are some of the key themes covered in the report.

“Civil Society Organisations (CSOs) are essential partners in development as affirmed by 160 governments and a number of international organisations in Busan. But the evidence gathered in this report shows that they often pay a heavy price for their work. We believe that the report will be useful to both governmental and civil society stakeholders taking stock of progress in their Busan commitments,” stated Sriskandarajah.

Of critical concern are reports of reprisals against civil society activists seeking to highlight violations before the UN Human Rights Council in Geneva.  The report contains strong evidence of the use of under-handed tactics ranging from smear campaigns, threats, travel bans, imprisonment and fines in a number of countries including Bahrain, China, Russia, Sri Lanka, Syria and the United Arab Emirates to prevent civil society members from engaging with multi-lateral forums.

Minor legal infractions have also been used as a convenient tool to shutdown prominent civil society organisations that have been critical of the government, particularly in least developed countries such as Afghanistan, Ethiopia, Sudan, Yemen and Zambia where civil society plays a critical role in providing basic services and pushing for democratic reforms.

The report builds on CIVICUS’ ongoing efforts to understand the conditions of civil society globally. At the end of September this year, CIVICUS launched the Enabling Environment Index, the first attempt to rank the governance, socio-cultural and socio-economic environments for civil society in 109 countries.