Global Monitor Report: Twice as many people live in repressed countries compared to a year ago

Findings based on data released today by the CIVICUS Monitor, a global research collaboration which rates and tracks respect for fundamental freedoms in 196 countries.

The CIVICUS Monitor's latest global assesment,  People Power Under Attack 2019, finds that the fundamental freedoms of association, peaceful assembly and expression are backsliding across the world. In the space of a year, twice as many people are living in countries where these civic freedoms are being violated: 40% of the world’s population now live in repressed countries - last year it was 19%.

The report, which is based on data from the CIVICUS Monitor, a global research collaboration, shows that civil society is under attack in most countries. In practice, this means that just 3% of the world’s population are now living in countries where their fundamental rights are in general, protected and respected – last year it was 4%.

2019 has been a historic year for protest movements. From the streets of Sudan to Hong Kong, people have poured onto the streets to make their voices heard. However, according to the 536 updates by the CIVICUS Monitor, the fundamental right to peaceful assembly is under attack across the world. In fact, within the last year the CIVICUS Monitor documented that 96 countries either detained protesters, disrupted marches or used excessive force to prevent people from fully exercising their right to peaceful assembly.

“This data reflects a deepening civic space crisis across the globe. As millions of protesters spilled onto the streets, government response has been repression instead of dialogue,” said Marianna Belalba Barreto, Civic Space Research Lead at CIVICUS. “However, the fact that so many activists were brave enough to raise their voices, shows the resilience of civil society in the face of brutal repression.”

Nine countries have changed their civic space rating: seven countries have been downgraded and only two improved their rating. Worrying signs for civic space are recorded in Asia-Pacific, where three countries dropped a rating: Australia, India and Brunei. There is growing concern about the decline of democratic and civic rights in Europe, with Malta also being downgraded. Other countries on the slide include Nigeria, Comoros and Madagascar.

People Power Under Attack 2019 also provides analysis on the kinds of violations most frequently recorded on the CIVICUS Monitor over the past year. Globally, censorship is the most common violation, occurring across 178 countries. From blocking websites and social media, to banning television programmes, governments across the world are going to great lengths to control public discourse and suppress free speech. The other top violations include: 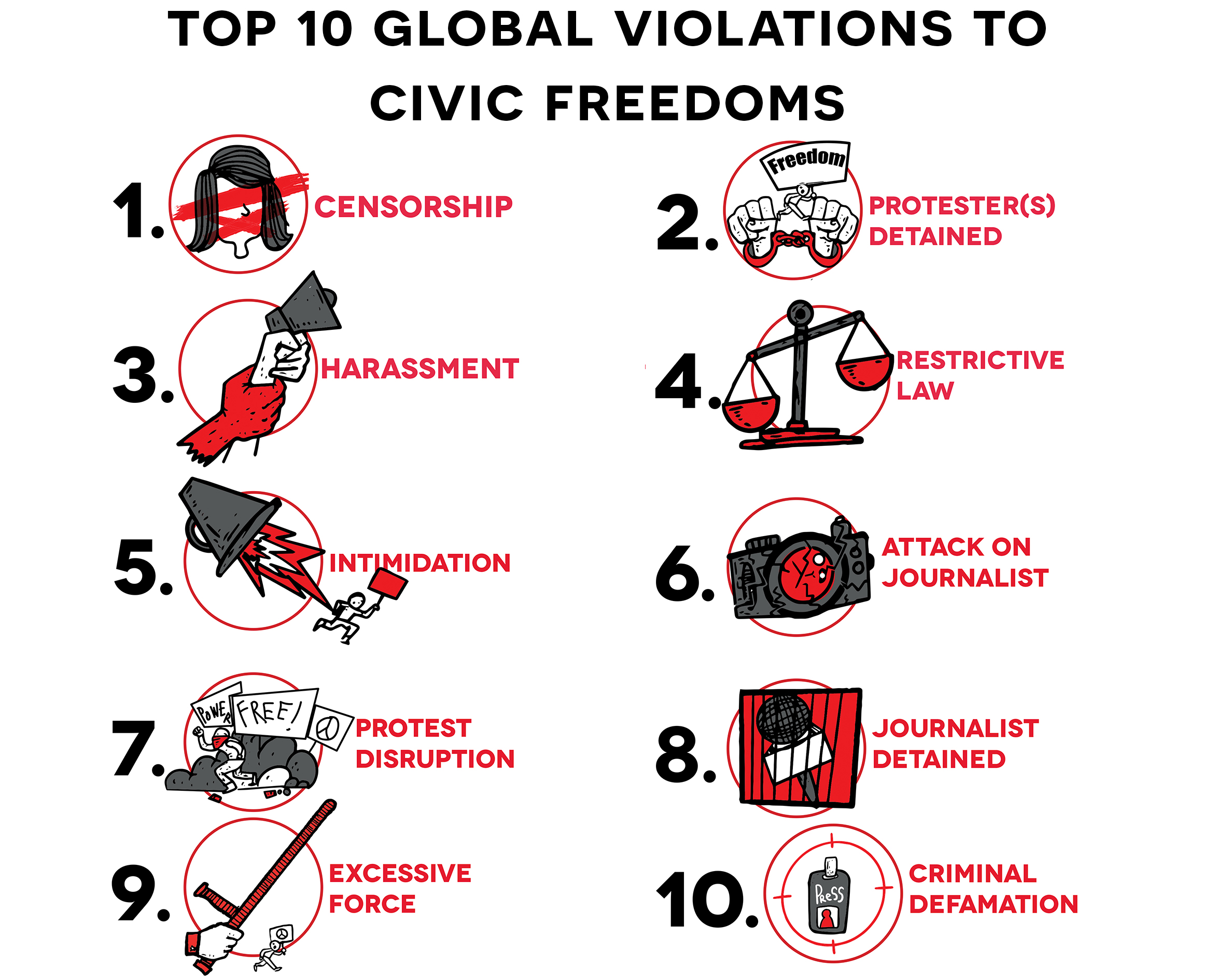 There are bright spots emerging, as both Moldova and the Dominican Republic improved their ratings this past year. The Dominican Republic moved from the obstructed to narrowed category after civil society managed to challenge and overturn restrictive laws; these laws related to defamation cases and constitutional amendments which would lengthen Presidential terms.

Over twenty organisations collaborate on the CIVICUS Monitor to provide an evidence base for action to improve civic space on all continents. The Monitor has posted more than 536 civic space updates in the last year, which are analysed in People Power Under Attack 2019. Civic space in 196 countries is categorized as either closed, repressed, obstructed, narrowed or open, based on a methodology which combines several sources of data on the freedoms of association, peaceful assembly and expression.

CIVICUS speaks about the prospects for democracy in Tunisia following the president’s July 2021...