Hong Kong: A year on, the National Security Law has crushed civic freedoms

CIVICUS, the global civil society alliance, is extremely concerned about the alarming regression of civic freedoms in Hong Kong. One year one from the passage of the draconian National Security Law, our research shows it has been weaponised to target dozens of pro-democracy activists and has created a chilling effect within civil society.

The National Security Law (NSL) punishes four types of activities: secession, subversion, terrorism and collusion with “foreign forces”, all carrying a maximum sentence of life in prison. These offences are vaguely defined and can easily become catch-all offences to prosecute activists and critics with potentially heavy penalties. 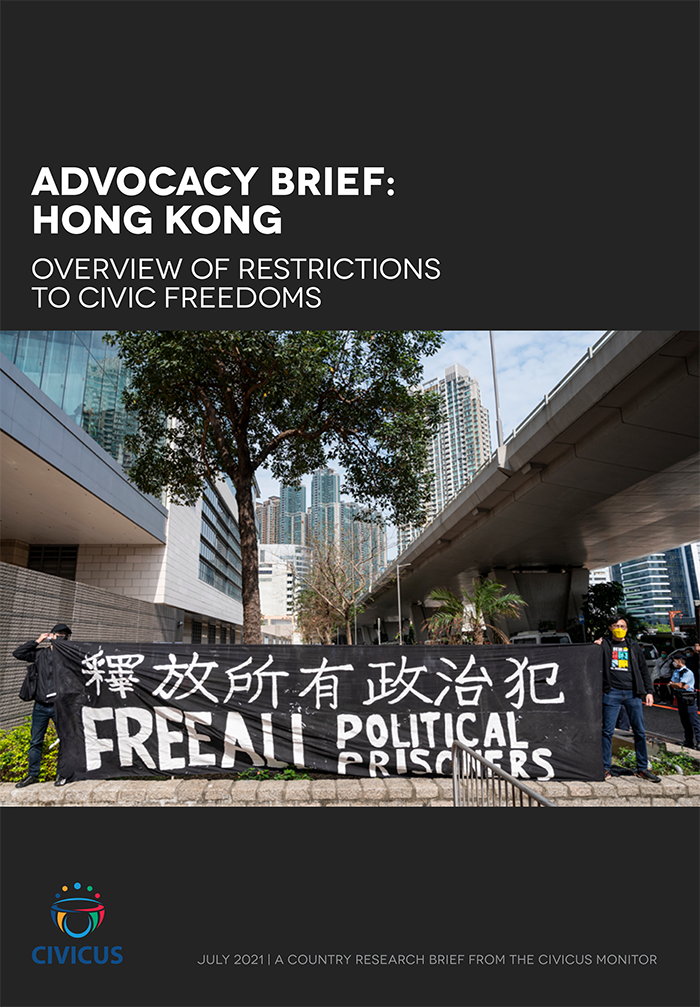 The NSL establishes new national security bodies which are partially or fully controlled by People’s Republic of China (PRC) officials, in violation of the Basic Law. It gives Hong Kong police sweeping new powers including to conduct warrantless searches and covert surveillance, and to seize travel documents of those suspected of violating the security law. The law also contravenes the UN Basic Principles on the Independence of the Judiciary and undermines the right to a fair trial by a competent, independent and impartial tribunal, guaranteed under Article 14 of the International Covenant on Civil and Political Rights (ICCPR).

"The national security law has become the most dangerous threat to civic freedoms in Hong Kong and has allowed for any form of dissent to be criminalised. The law has increased the climate of fear in Hong Kong and has been weaponised to target government critics, including people who are merely expressing their views or protesting peacefully”, said David Kode, Head of Advocacy at CIVICUS

More than a hundred people have been arrested under the National Security Law including pro-democracy activists, former lawmakers, lawyers, journalists and students. Activists have been accused of inciting or abetting secession or subversion just for showing leaflets and banners with reference to Hong Kong Independence or for their social media posts.

In January 2021, 55 people, including pro-democracy activists, opposition candidates, former lawmakers and lawyers, were arrested and detained under law for ‘subversion’ for holding and participating in primary elections held by Hong Kong’s pro-democratic party in July 2020. 47 of the activists have been charged.

The NSL has also dramatically changed the environment for civil society in Hong Kong, greatly impeding the ability of civil society to carry out their work. Some have quit on the eve of the law’s introduction while others have exercised greater caution in their activities. The chilling effect of the crackdown on the entire sector cannot be overstated.

The law has also been deployed against the media. Media owner Jimmy Lai, the founder of Apple Daily, a major pro-democracy newspaper, has been detained since December 2020. He is facing multiple charges, including ‘colluding with foreign forces’. In May 2021, authorities announced they had frozen assets belonging to Lai under the national security law marking the first time a company has been targeted by the controversial legislation.  On 17 June, six of the newspaper’s staff and executives were arrested for their role in the publication of more than 30 articles that called on foreign countries to impose sanctions. All were charged under the NSL. Apple Daily ceased operations on 26 June.

“The use of the national security law to silence activism is a violation of international law. The repression against pro-democracy activists and other critics has led to the dismantling of civil society in Hong Kong, forcing many to flee the territory. The international community must not remain silent in the face of such abuses but must stand up and stand in solidarity with those defending human rights” said David Kode.

Since 2019, the Hong Kong authorities have also deployed other laws to criminalise peaceful protests in particular the Public Order Ordinance which has been used to charge activists holding and participating in an ‘unauthorised assembly’, It carries a maximum five-year sentence.  The UN Human Rights Committee has criticised the law, saying that “it may facilitate excessive restriction” to basic rights.

Pro-democracy activist Joshua Wong was sentenced to 13 and a half months in December 2020 for a mass protest outside a police station in June 2019. Wong’s long-time fellow activists Agnes Chow and Ivan Lam were also sentenced to 10 and seven months in prison for ‘incitement,’ referring to their use of a megaphone to shout slogans during the protest.

In April 2021, the courts sentenced ten pro-democracy activists to between eight and 18 months in prison for gatherings that were part of a series of mass protests triggered by the proposed Extradition Bill. In May 2021, eight activists were sentenced for organising a protest in October 2019. More recently, On 4 June 2021, the authorities banned the annual Tiananmen massacre vigil for a second straight year and arrested barrister and activist Chow Hang Tung for breaching section 17A(1D) of the Public Order Ordinance by ‘promoting an unauthorised assembly’.