As Kenyans head to the polls on 9 August to elect a new president, a new report by global civil society alliance, CIVICUS and the Kenya Human Rights Commission (KHRC) highlights the decline in civic rights in the country and urges the authorities to respect fundamental freedoms during this crucial period. Protest restrictions, attacks on journalists and the misuse of laws are of particular concern. 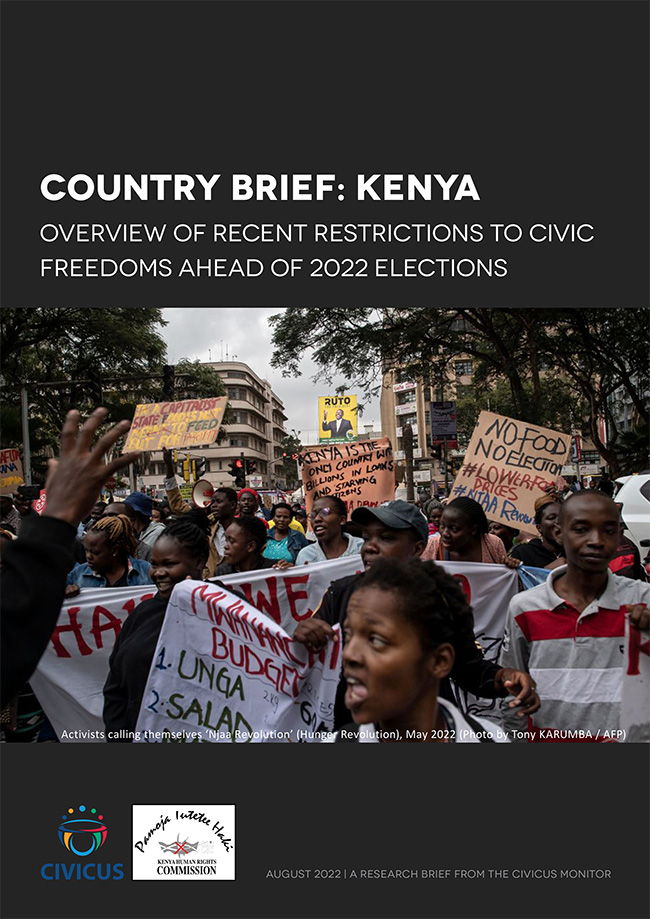 According to the new research brief, Kenyan authorities have used excessive force to clamp down on protests and suppress dissent in the run-up to the election. Recent demonstrations to protest the rising cost of food under the hashtag #Njaa-Revolution (‘Hunger Revolution’) have been met with unlawful arrests, detention and brutal force; in April, human rights defender Julius Kamau was violently assaulted outside the National Treasury after protesting rising food prices.  Lethal and crowd control weapons such as live ammunition, teargas and rubber bullets are commonly used by police to disperse gatherings.

CIVICUS and the KHRC are also concerned about the misuse of laws to undermine peaceful protest. The Public Order Act, a law from the British colonial period, requires activists to notify authorities of protests at least 3 days in advance. However, there have been cases of authorities tearing up notification letters and refusing to receive them.

Also, police have mistakenly understood the provision as a requirement for protests to be approved or denied, using it as an excuse to deem protests ‘unpermitted’, as was seen on 28 June 2022 when a letter notifying police about an intended protest by the Social Justice Centre, a Nairobi-based grassroots group, was rejected without explanation. Although the right to peaceful assembly is guaranteed in Kenya’s constitution, it is continually undermined.

“The right to peacefully protest is fundamental in any functioning democracy. Authorities and law enforcement bodies must respect and ensure citizens can exercise their civic rights, this is critical in ensuring inclusive participation in the electoral process,” said Sylvia Mbataru, East Africa Researcher, CIVICUS.

As the space for street protests becomes more closed and restricted, activists have turned to social media to air their grievances. The #NjaaRevolution attracted a huge online following with its calls to control soaring prices and other basic commodities. In May, the movement was silenced by Twitter with over 20 accounts being suspended for ‘violating Twitter Rules’ and acting ‘suspiciously’ - no further justification was given. Suspending the online accounts of major activists in the run-up to elections is tantamount to censorship.

Attacks on freedom of speech extend to journalists. Incidents and violations against the press are on the rise ahead of elections, including the assault of two journalists covering an event at Raila Odinga’s party headquarters in March 2022. In a separate incident a Citizen TV journalist, Martin Kosgey, was threatened via text after airing a story implicating a governor's bodyguard in a murder case. Kosgey also reported that he had received intelligence that there was a plan to harm him over the story.

The apparent political capture of the country’s media regulatory body has also contributed to a decline in press freedom. In November 2021, President Uhuru Kenyatta appointed a new head of the Communications Authority, seemingly consolidating the ruling party's power over a strategically important body that is supposed to be non-partisan.

The possibility of political interference undermines the body's mandate to serve as a watchdog for public media and to monitor the operations of the state news agency. In theory, the authority is responsible for ensuring fair and impartial reporting for the upcoming elections, but there is a risk that it will be used to limit the space for independent media.

Political interference in Kenya’s democratic institutions also extends to the judiciary. Most notably, in 2021 when the president defied the constitution by refusing to swear in six judges nominated by the Judicial Service Commission (JSC). Judicial Officers have also been subjected to numerous attacks from the political elite and the executive.

Kenya was placed on the CIVICUS Monitor’s human rights ‘Watchlist’ in June 2022. The Watchlist highlights countries where there has been a recent and steady decline in civic freedoms, including the rights of free speech and peaceful assembly.

Kenya is currently rated Obstructed by the CIVICUS Monitor. There are 42 countries in the world with this rating (see all). This rating is typically given to countries where power holders heavily contest civic space and impose a combination of legal and practical constraints on the full enjoyment of fundamental rights (see the full description of ratings).

Protesters detained in over 90 countries from the past year finds new global report Demonstrations in...