Afghanistan: The Taliban's assault on rights, a year on from its takeover

On 15 August 2021, the Taliban seized power in Afghanistan. Over the last year, the Taliban has overseen a systematic assault on civic space, which is rated as repressed by the CIVICUS Monitor

This new CIVICUS report “The Taliban’s assault on civic space, a year on from its takeover”, shows that human rights defenders have lived in a climate of fear since the Taliban takeover and have faced harassment and threats. While some human rights defenders have been able to leave the country, the lack of adequate documents and the impossibility of obtaining visas for many countries make it extremely difficult for them to leave and forcing them into hiding. 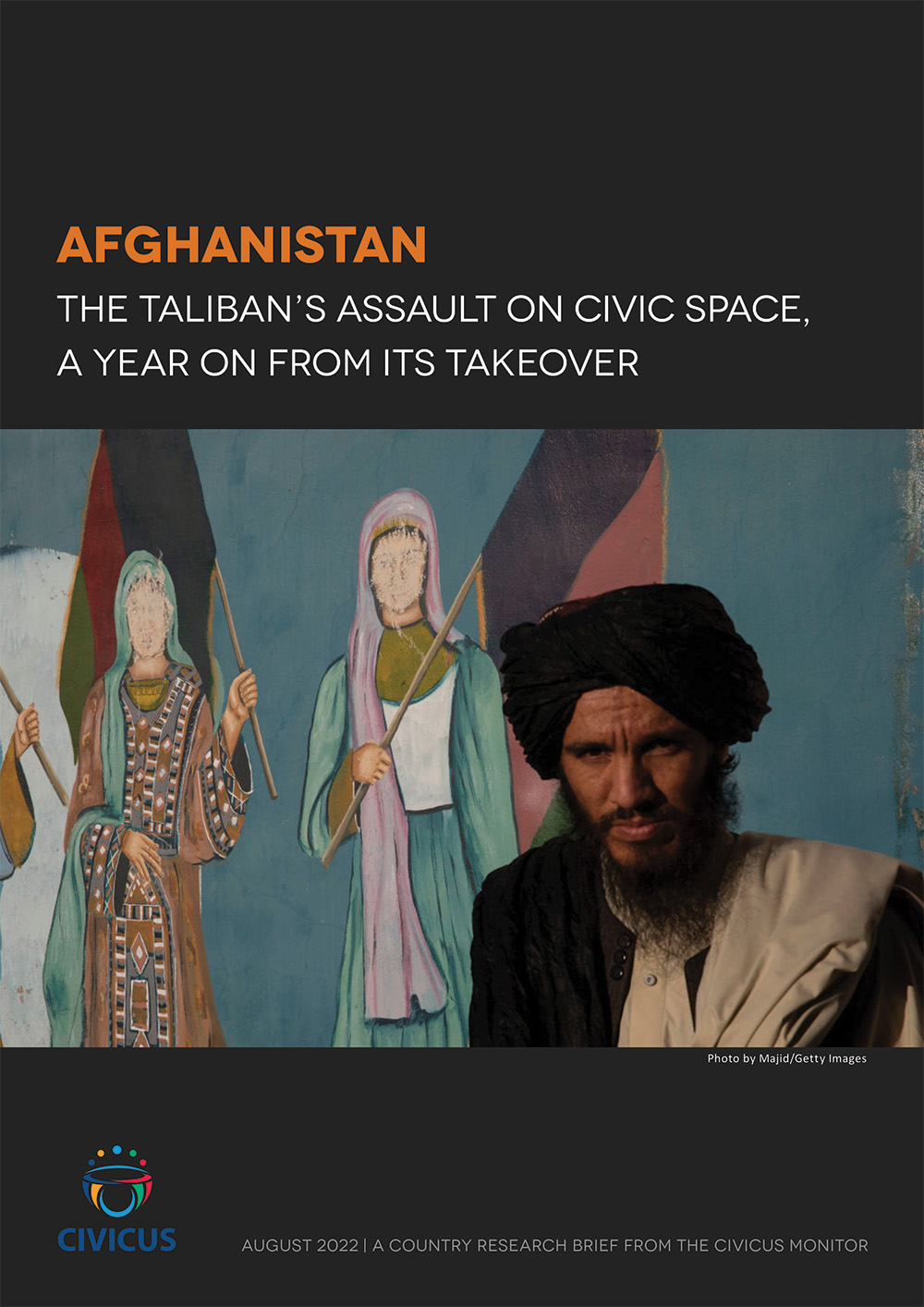 Following the Taliban takeover, thousands of people took to the streets to protest against the Taliban and demand their rights. In Kabul and other cities, the Taliban responded with excessive force, gunfire and beatings to disperse crowds, leading to deaths and injuries of peaceful protesters.

The Taliban have also sought to repress protests, especially by women’s rights activists over the year, disrupting their protests by firing shots into the air, detaining, interrogating and ill-treating them. In some cases, teargas and batons were used. The Taliban also assaulted journalists and confiscated their equipment to stop them covering the protests. Some of the women’s rights activists have also been intimidated and coerced to air so-called confessions in which women say activists based outside the country had told them to protest.

Journalists are at increased risk following the Taliban takeover. Scores have been arrested, detained, tortured or ill-treated, or attacked for covering the situation on the ground.

The Taliban has also shut down key institutions. Following the Taliban takeover in August 2021, the Ministry of Women’s Affairs was shut down, depriving women’s rights groups of a key channel for survivors of gender based-violence seeking protection and services. In October 2021, the Taliban seized the offices of the Afghanistan Independent Human Rights Commission (AIHRC) and in May 2022, dissolved the commission saying it was ‘not considered necessary’. It has also taken over Afghanistan’s Independent Bar Association (AIBA).

Activists who have fled Afghanistan, particularly those in Central Asia, Pakistan and Turkey, are experiencing various challenges, including running out of funds, expiration of their visas and a lack of programmes for resettlement.

The international community has taken some steps in response to the situation in Afghanistan. The UN Human Rights Council adopted a resolution in October 2021 to appoint, for one year, a Special Rapporteur to monitor the status of human rights in Afghanistan. In May 2022, the UN Special Rapporteur on the situation of human rights in Afghanistan, Richard Bennett, appointed in April 2022, undertook his first visit to the country. In July 2022, the Human Rights Council passed a consensus resolution affirming its commitment to equal rights for women in Afghanistan and called for representative participation in an organised dialogue on the issue at the next Council session.

The UN General Assembly, in December 2021, indefinitely postponed international recognition of the Taliban government. The resolution adopted by consensus effectively held off any decision on recognition for at least 10 months. In March 2022 the UN Security Council decided to extend the mandate of the UN Assistance Mission in Afghanistan (UNAMA) for one year.

However, all these efforts have fallen short of the calls made by Afghan civil society activists over the year for the UN to establish a fact-finding mission or similar independent investigative mechanism on Afghanistan, end all exemptions for sanctioned Taliban leaders if there is no progress on human rights and increase efforts to provide urgent support and protection for all Afghan human rights defenders, including those in exile.

In the report, CIVICUS makes a number of recommendations to the international community:

Afghanistan is currently rated ‘Repressed’ by the CIVICUS Monitor. There are a total of 50 countries in the world with this rating (see all). This rating is typically given to countries where civic space is heavily contested by power holders, who impose a combination of legal and practical constraints on the full enjoyment of fundamental rights (see the full description of ratings).

Horia Mosadiq, is an Afghan women human rights defender (HRD) and founder of Safety and Risk...

CIVICUS speaks with Arash Azizzada, co-founder and co-director of Afghans for a Better Tomorrow,...