Philippines: Submission to the UN Human Rights Committee on the deterioration of civic space

CIVICUS has submitted a report to the UN Human Rights Committee on the state of civic space in Philippines ahead of its review of the state’s implementation of its obligations under the International Covenant on Civil and Political Rights (ICCPR) on 10 October 2022. 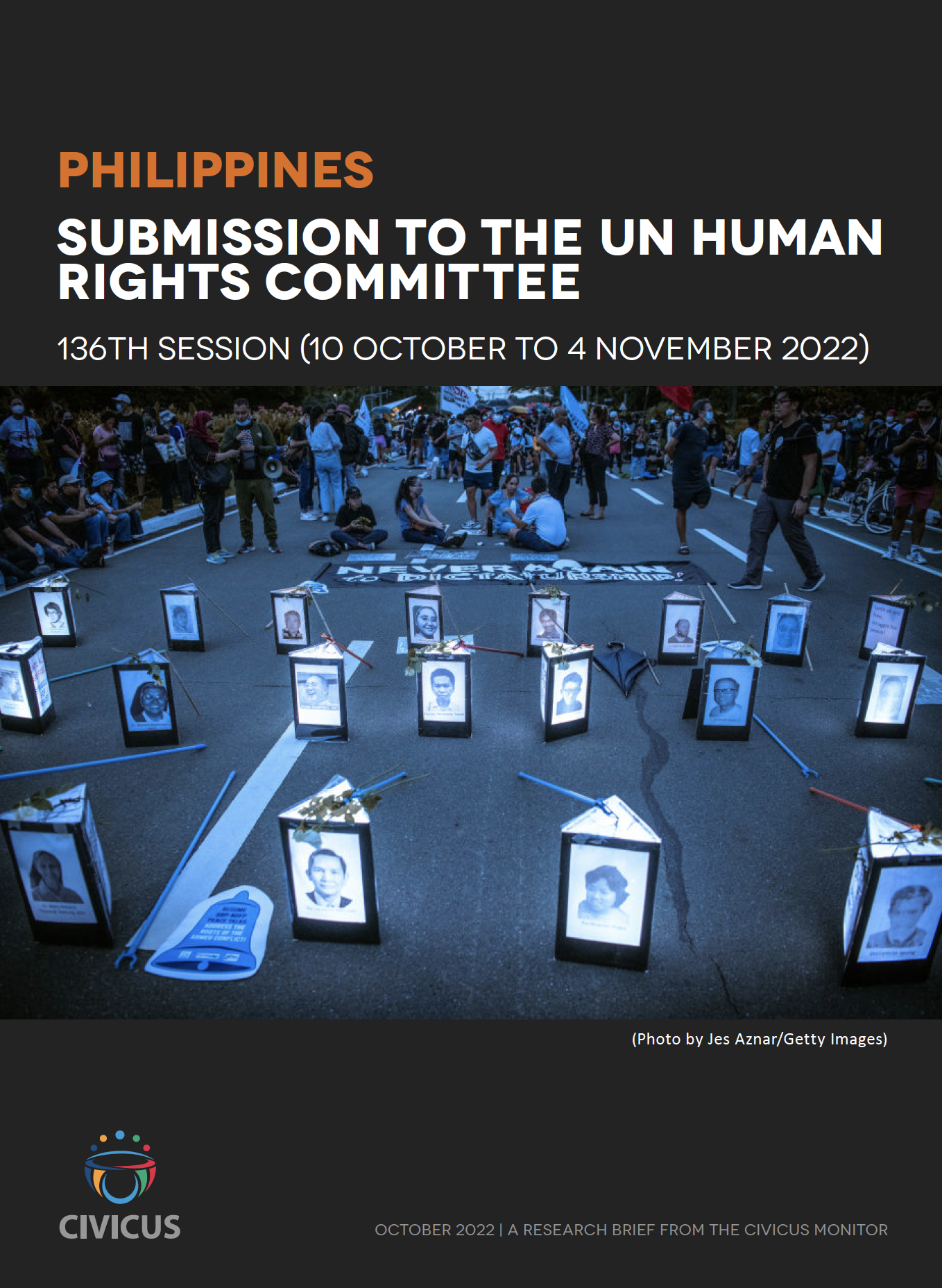 In the submission, CIVICUS documented use of defamation and sedition laws to stifle dissent as well as ongoing harassment and attacks against journalists in the Philippines. A number of laws in the Revised Penal Code of the Philippines have been used to criminalise the freedom of expression and as such are inconsistent with the ICCPR. They include Article 154 (unlawful use of means of publication and unlawful utterances), Articles 353 to 355 (libel), Article 357 (slander) and Article 139 (sedition).  Section 4(c)(4) of the 2012 Cybercrime Prevention Act criminalises online libel.

There has also been closure of media outlets. Former President Duterte had been at odds with critical media outlets for reporting on his administration’s ‘war on drugs’. ABS-CBN, the Philippines’ top broadcaster, was forced off the air in May 2020 after it was ordered by the media regulator to stop operations as the network’s congressional franchise had expired and it was refused a new licence. CIVICUS has also documented cases of arrests, threats and the killing of journalists with impunity.

The submission also notes that 1985 Public Assembly Act is still inconsistent with international law and standards and a proposed new law regulating public assemblies which was adopted by the House of Representatives in February 2018 and is currently before the Senate could allow for unlawful restrictions on the right to peaceful assembly. CIVICUS has also documented a number of cases where the right to protest was restricted by the police arresting protesters and using unnecessary or excessive force again them.

The phenomenon of ‘red-tagging’ – labelling individuals or groups as communists or terrorists – poses a serious threat to civil society and activists. ‘Red-tagging’ has been used for decades in the Philippines but according to human rights groups, ‘red-tagging’ became deadlier when Duterte became president in 2016. This label puts activists at grave risk of being targeted by the state and pro-government militias.

Restrictions on foreign funding for NGOs have been documented. The authorities have also targeted activists directly by arresting and detaining them, often on fabricated charges. There have also been reports of evidence being planted by the police and military forces to justify arrests or violence against activists.

CIVICUS has documented the extrajudicial killings of human rights defenders and activists. Accountability for these actions have been virtually non-existent. The draconian 2020 Anti-Terrorism Act includes a worryingly broad definition of terrorism and grants the Philippines police and military wide powers to detain suspects and relaxes accountability for law enforcement agents who violate the rights of suspects, particularly those in detention.

The submission calls on the UN Human Rights Committee to make a series of recommendations including:

Philippines is currently rated Repressed  by the CIVICUS Monitor. There are a total of 50 countries and territories in the world with this rating (see all). This rating is typically given to countries where civic space is heavily contested by power holders, who impose a combination of legal and practical constraints on the full enjoyment of fundamental rights (see full description of ratings).

As part of the #16DaysOfActivism campaign, CIVICUS speaks about gender-based violence and civil...