Two years ago, this week, human rights champion Baquer Namazi was arbitrarily arrested and detained by the authorities as he arrived in Iran to visit his detained son. During his incarceration at the notorious Evian prison in Tehran, the 81-year-old Iranian-American’s health has deteriorated significantly in terrible conditions.

On the second anniversary of his arbitrary imprisonment, Global civil society alliance CIVICUS is appalled at Baquer’s treatment and calls on the Iranian authorities to consider his ailing health and release him immediately.

Since his incarceration, Baquer has had to see a doctor repeatedly for emerging, life-threatening cardiac and blood pressure problems. He was released on medical parole on 28 January 2018 but was ordered back to prison just days later, against the advise of Iranian medical officials.

Before his arrest, Baquer worked as an advocate for the rights of marginalised groups, children and excluded communities, and a just world in which freedom of speech is protected and the high levels of inequality are reduced. He served as representative of UN children’s agency, UNICEF between 1984 and 1997, stationed in Kenya, Somalia and Egypt. Baquer focused on excluded communities as well as on women and children affected by war. He also founded Hamyaran Iran, a capacity-building support organisation for NGOs in Iran. 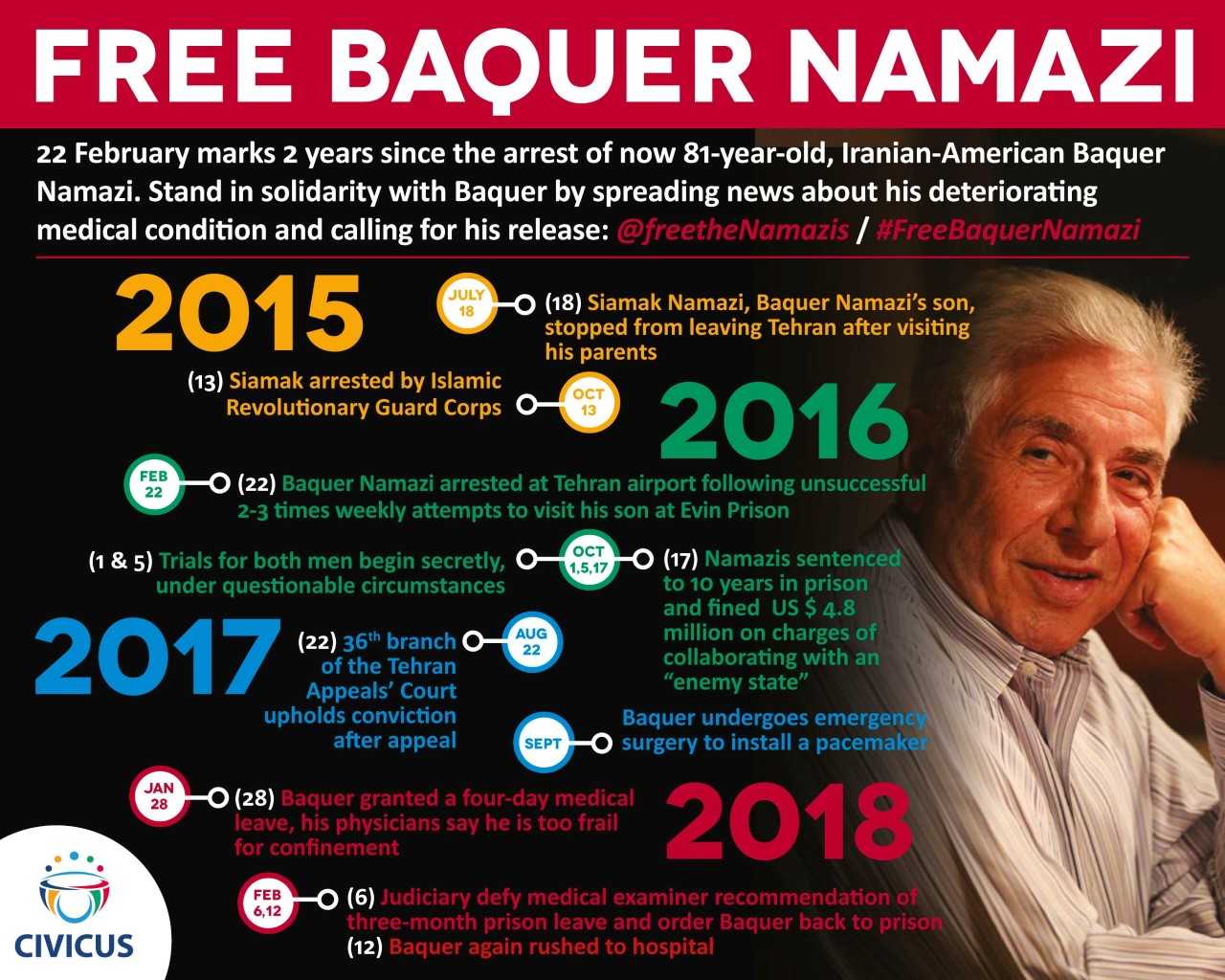 Baquer had travelled to Tehran on 22 February, 2016 to see his son who had been detained by Iranian authorities in July the previous year. Both Baquer and his Siamak Namazi were sentenced to ten years on false charges of colluding with an enemy state.  Their trial was held in secret, lasted only a few hours and the public and the media were denied access to the proceedings. The full details of the charges against them remain unknown.  Baquer and Siamak have been held in harsh conditions and have on several occasions been placed in solitary confinement.  In August 2017, they lost an appeal against their lengthy sentence.

Said David Kode, CIVICUS head of Campaigns and Advocacy: “The harsh treatment suffered by Baquer and Siamak has nothing to do with breaking any law but aptly demonstrates that innocent, peace-loving citizens are often the victims of the geopolitical and strategic games played by the United States and Iran.”

The government of Iran has a responsibility to free Baquer and Siamak since they have not committed any crime.

Baquer attended CIVICUS World Assemblies in Montreal, Canada and spoke about his deep commitment to a better and more socially cohesive future for his country. CIVICUS urges the authorities in Iran to release Baquer and Siamak, drop all charges against them and allow Baquer to receive urgent medical attention.

Iran is rated closed by the CIVICUS Monitor, an online tool that tracks civic space in different countries around the world.

Arabic CIVICUS, together with more than 60 organisations, calls for an open and independent...