Pakistani human rights defender Professor Muhammad Ismail - refused bail today by an anti-terrorism court in Peshawar - should be released immediately, says global civil society alliance CIVICUS.  We call on Pakistani authorities to drop all charges against him and his wife, Uzlifat Ismail,  and stop persecuting and intimidating other members of his family.  Professor Ismail and his family are now planning to apply for bail at the Peshawar High Court.

Professor Muhammad Ismail was arrested on 2 February 2021 after the Anti-Terorrism Court in Peshawar cancelled his interim pre-arrest bail. On 4 February the professor was chained and taken to his family home in Marghuz village, Swabi District.  The Counter Terrorism Department (CTD) police seized documents and mobiles belonging to him and his wife Uzlifat Ismail. The houses of relatives were also raided.

Mohammed Ismail is a prominent member of Pakistani civil society and the focal person for the Pakistan NGO Forum (PNF), an umbrella body composed of five networks of civil society organizations (CSOs) in Pakistan. Since July 2019, Mohammed Ismail and his family have faced systematic harassment and intimidation from the security forces.

He and his wife are facing trumped up charges in relation to terrorism, sedition and criminal conspiracy. He has spent the last 13 days in detention at the Counter Terrorism Department Police Station in Peshwar. 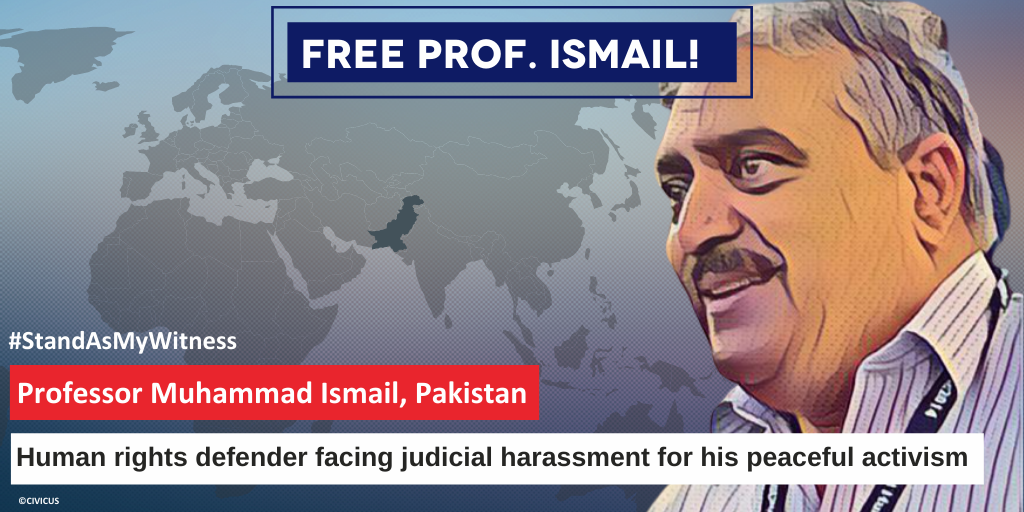 It is believed the case against Muhammad Ismail and his family is in retaliation for the work of his daughter, award winning women’s rights activist Gulalai Ismail. She has faced harassment and persecution from the authorities for her peaceful advocacy for women’s rights and her efforts to end violations against the ethnic Pashtun people of Pakistan.  She was forced to flee Pakistan due to concerns for her safety.

“I am shocked by the court’s decision to refuse bail to my father. The Pakistani state is victimising my parents through judicial harassment to force me into silence. Prolonging his detention is having a huge toll on his physical and mental health due to his post-COVID fragility. The courts are aware that it’s a mala fide case, made up to victimise my parents because of my human rights activism. An independent court would have granted my father bail, dismissed his case and brought to justice those state actors who are misusing the judicial system for ulterior motives,” said Gulalai Ismail, daughter of Professor Muhammad Ismail.

The 66 year old human rights defender is currently being held in inhumane conditions, sleeping on the floor of  a room holding 60 people.  CIVICUS is  extremely concerned about the health of Muhammad Ismail, who has chronic health problems and only recently recovered from COVID-19. CIVICUS urges the Pakistani authorities to ensure Profesor Ismail is not subjected to torture or other ill treatment in detention, and calls on the authorities to give him unrestricted access to his chosen lawyer and family.

“The ongoing persecution and arbitrary detention of Professor Ismail is unwarranted, it is a brutal response by the Pakistani authorities to the human rights activities of his family. He has done nothing wrong and is a victim of a state that does not respect freedom of speech and the rule of law.  Professor Muhammad Ismail should be released immediately and all charges against him and his family must be dismissed,” said Josef Benedict, Asia Civic Space Researcher at the CIVICUS Monitor.

Due to the ongoing persecution of Professor Muhammad Ismail and his family, CIVICUS has added him to its global  #StandAsMyWitness campaign. The campaign urges people to call for an end to the imprisonment and harassment of human rights defenders across the world. People are also encouraged to share his story, and the stories of other rights defenders, on social media using the hashtag #StandAsMyWitness.

We call on the Pakistani authorities to respect national and international human rights obligations, release Mohammed Ismail, and drop all charges against him and all members of his family.

CIVICUS speaks about the political situation in Pakistan since the removal of its Prime Minister Imran...