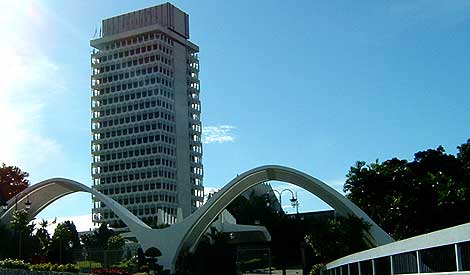 Global civil society alliance CIVICUS is extremely concerned by the escalation of repression of critical voices by the Malaysian authorities in recent weeks. These cases highlight an increasing intolerance for dissent by the government as they seek to hold on to power and is creating a chilling effect on freedom of expression and peaceful assembly.

On 23 April 2021, the police arrested activist and artist Fahmi Reza under Section 4(1) of the draconian Sedition Act and Section 233 of the Communications and Multimedia Act (CMA) in relation to a satirical Spotify playlist about the Queen. He was released the day after, but the investigation is ongoing. Previously, in March 2021, he was questioned by the police about two caricatures of the Health Minister, that he posted on multiple social media platforms.

On 28 April, it was reported that another cartoonist, Zulkifli Anwar Ulhaque - who goes by the pen name Zunar -  is also being investigated by the police over a satirical drawing in January 2021 that mocked the Kedah state Chief Minister for his decision to cancel a holiday to mark a Hindu festival. Officials had defended cancelling the holiday, blaming the coronavirus pandemic. He is being investigated under Section 505c of the Penal Code for ‘incitement’ and Section 233 of the CMA.

“The Malaysian authorities have become so fearful of dissent that anyone who dares to speak out including artists and cartoonists face judicial harassment. The government must end this absurd probe of Fahmi Reza and Zunar, halt its use of restrictive laws and respect the right to freedom of expression that is guaranteed in the constitution”, said Josef Benedict, Asia Pacific researcher for CIVICUS.

The authorities have also sought to harass peaceful protesters for exercising their fundamental freedoms. On 29 March, police summoned 11 individuals to give a statement for a peaceful protest held outside parliament to protest the Election Commission’s (EC) delay in implementing the 18-year voting age. Those hauled up include the organisers and opposition politicians. According to reports they are being investigated under Section 9(5) of the Peaceful Assembly Act 2012, for gathering without notification.

On the same day, the police said it will be calling up around 90 participants of a physically distanced sit-in protest in front of the Parliament on 30 April, where participants broke their fast together for the Muslim holy month of Ramadan. The rally was held to call for the reopening of Parliament, which had been suspended following the January 2021 declaration of a State of Emergency, purportedly to deal with the pandemic. This emergency has been questioned by civil society who have accused the Prime Minister of using the pandemic to cling to power by preventing the parliament from convening and determining if he still has the majority to form a government.

“The harassment of peaceful protesters highlights the shrinking space for fundamental freedoms under the Perikatan Nasional government. The questioning of these individuals is aimed at creating a climate of fear and stifling criticism of the government and must end. As a country that is seeking membership of the Human Rights Council, these actions clearly run contrary of international human rights law and standards that such as body is supposed to protect,” said Benedict.

In a joint report with Article 19, released in March 2021, our organisations found that the Perikatan Nasional government has undermined and obstructed the exercise of fundamental freedoms. It has initiated baseless criminal proceedings against government critics, human rights defenders, journalists, and individuals expressing critical opinions. It has also attempted to silence peaceful protesters and also impede the formation of political parties to keep itself in power.

Civic space in Malaysia is rated as ‘obstructed’ by the CIVICUS Monitor.