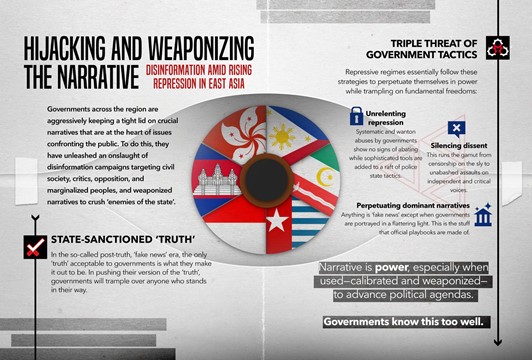 Disinformation campaigns are on the rise in East Asia as states use false information to shape self-serving narratives.

The newly launched DisinformationCounter.com sets out to contribute to public knowledge and understanding of disinformation, especially how governments use it in ways that negatively impact civic space and democracy in East Asia. The platform launches with a research project to map the regional disinformation landscape. Case studies focused on the Philippines, Mindanao, Indonesia, West Papua, Hong Kong, and Cambodia, but are indicative of a larger, systemic issue across the region. This research is, therefore, to be seen as part of the rising call from East Asian civil society for greater transparency and freedom of information.

Accompanying the research, the ARTSvsDISINFORMATION project brought seven artists together to explore creative, accessible, and public ways of responding to and resisting disinformation. It is also hoped that the research and artistic responses will inspire and empower civic, academic, and creative responses towards disinformation.

Both projects are hosted on the newly launched DisinformationCounter.com.

"Disinformation erodes democracy. It undermines fundamental freedoms. It stokes hate and violence while polarizing societies along the lines of race, religion, ideology, class, and gender. It destroys lives. In a crisis that is on a scale we’ve never seen before, disinformation kills. East Asia has been witness to this and more, much like the rest of the world.”

HIJACKING & WEAPONIZING THE NARRATIVE: Disinformation Amid Rising Repression in East Asia examines the specific ways by which states have become a major player in the spread of disinformation and how these narratives influence state policies and the use of state resources. Written and edited by well-known journalists and writers on disinformation in the region, this research project maps the disinformation landscape in the Philippines, Mindanao, Indonesia, West Papua, Hong Kong, and Cambodia.

Why we should be concerned

CIVICUS Asia Pacific Researcher Josef Benedict says, “Across the Asian region we are seeing governments deploy disinformation tactics to spread pro-government narratives, mount smear campaigns against their political opposition and civil society, and to divert conversations away from critical issues facing people’s lives. This critical report exposes these manipulation campaigns and empowers civil society to challenge both states and non-state actors to not only refrain from conducting and sponsoring disinformation, but to address it in a manner that respects human rights, democracy, and the rule of law.”

Creating and pushing narratives that distort otherwise meaningful public conversations has become an integral, albeit destructive, component of the strategies that have been used by governments for ages. Today’s technologies have ramped up these efforts, ushering in a new world disorder that has governments hijacking and weaponizing narratives. Talk about the ‘new normal’ in the digital age!

“Narrative, after all, is power, especially when used – calibrated and weaponized – to manipulate people to advance specific agendas, especially of those in power,” writes Tess Bacalla in her introduction to the research.

These reports lift the veil on how repressive governments in the region are increasingly using disinformation to rein in dissent while perpetuating power. These on the whole are reeling under the burden of aggressive campaigns against the dissemination of truthful accounts of public governance issues and events that impact people’s lives while muting counter voices, often with the use of brute force, draconian legislation, and other forms of repression.

Why this research matters

When asked why this research project is important to the region, Tess responded with this remark, “To say that there is extreme urgency to train the spotlight on the unrelenting scourge of disinformation – this, as states and other political actors wantonly manipulate information to suit their political agendas while harming the public interest – is to belabor the obvious.

“This series of reports is a step in that direction – and a plea for action.”

To view the collection of seven artworks, click here.

To read the series of disinformation reports, click here.

CIVICUS is a global alliance of civil society organisations and activists dedicated to strengthening citizen action and civil society throughout the world.

We were established in 1993 and since 2002 have been proudly headquartered in Johannesburg, South Africa, with additional hubs across the globe. We are a membership alliance with more than 10,000 members in more than 175 countries.

For further information or to request interviews with CIVICUS staff and contributors to this project, please contact Josef Benedict:

CIVICUS discusses the recent elections in Nicaragua, characterised by the banning of candidates,...