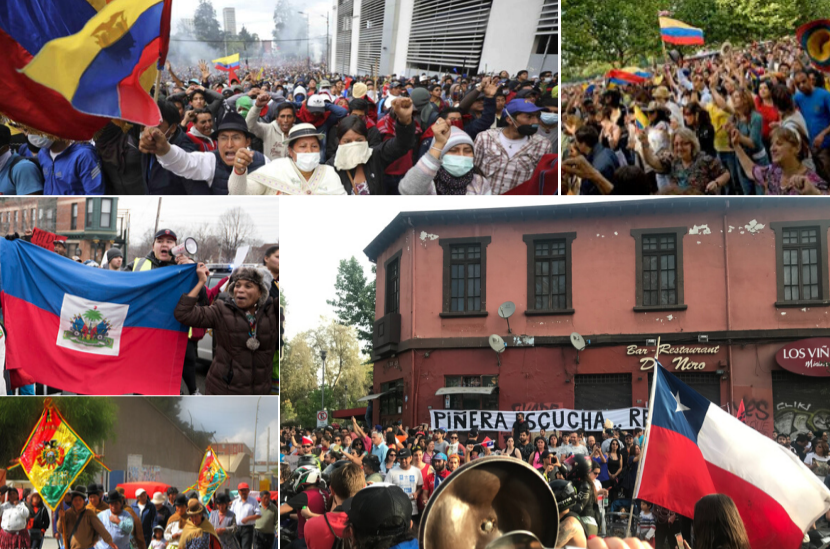 Global civil society alliance, CIVICUS condemns the violent response by security forces to the genuine demands of demonstrators in several countries in Latin America and the Caribbean who have taken to the streets to protest against deteriorating socio-economic conditions, corruption and unaccountable governance. We urge all governments in affected countries to abide by international human rights standards which provide for every person to exercise their right to peaceful assembly. The closed nature of political spaces and the difficulties citizens face in getting their concerns heard through formal government channels have forced millions in the region to engage in public protests. The response from security forces in most of these countries has been violent.

The protests in Colombia and the response by the authorities reflect the deterioration of civic space. The authorities have used violence against protesters condemning and demanding justice for the killing of human rights defenders. Colombia is now on the CIVICUS Monitor’s “Watch List which draws attention to countries where there is a serious and rapid decline in respect for fundamental freedoms. In Ecuador, the country came to a standstill when protesters rejected an economic package meant to boost the economy. According to the Ombudsman’s Office eight people have been killed, 1,340 injured and 1,192 detained. Indigenous peoples were particularly targeted by security forces during the protests.

“There is no justification for the violent actions of the police and the excessive use of force over citizens that are protesting peacefully to express their discontent with their governments. The governments of Latin America and the Caribbean should comply with its international human rights obligations and stop clamping down on the rights of citizens,” said CIVICUS’ advocacy and engagement officer Natalia Gomez.

In Chile, the human rights institute, Instituto Nacional de Derechos Humanos de la República de Chile (INDH), recorded that 4,271 people were detained and 1,305 injured in protests from 17th October to 31st October 2019. The INDH has also received 120 complaints of torture and 18 of sexual assault and noted that at least 18 people have been killed. In Bolivia, the confrontations have largely involved groups of government supporters and the opposition. News outlets report that at least thirty people were injured in demonstrations on 28 October 2019. Even after President Evo Morales left the country, the violence and the disproportionate use of force continued to escalate.

In Haiti thousands have been protesting the current government and various social policies. According to the Inter-American Commission on Human Rights, the police has responded with excessive force to repress the demonstrations. The Commission denounced the killing of at least 17 people, many of them by police forces, during the protests in September 2019.

CIVICUS calls on the authorities of Ecuador to ensure that the incidents of violence that occurred during the October protests are effectively investigated, and the perpetrators are brought to justice. We also urge the authorities in Chile, Bolivia, Haiti and Colombia where current protests are taking place to ensure a safe environment for protestors and respect their right to raise concerns and assemble peacefully.

Advocacy and Campaigns Lead for LAC