Human Rights Defenders call on ASEAN and the international community to hold the junta accountable for grave human rights violations and atrocity crimes in Myanmar. 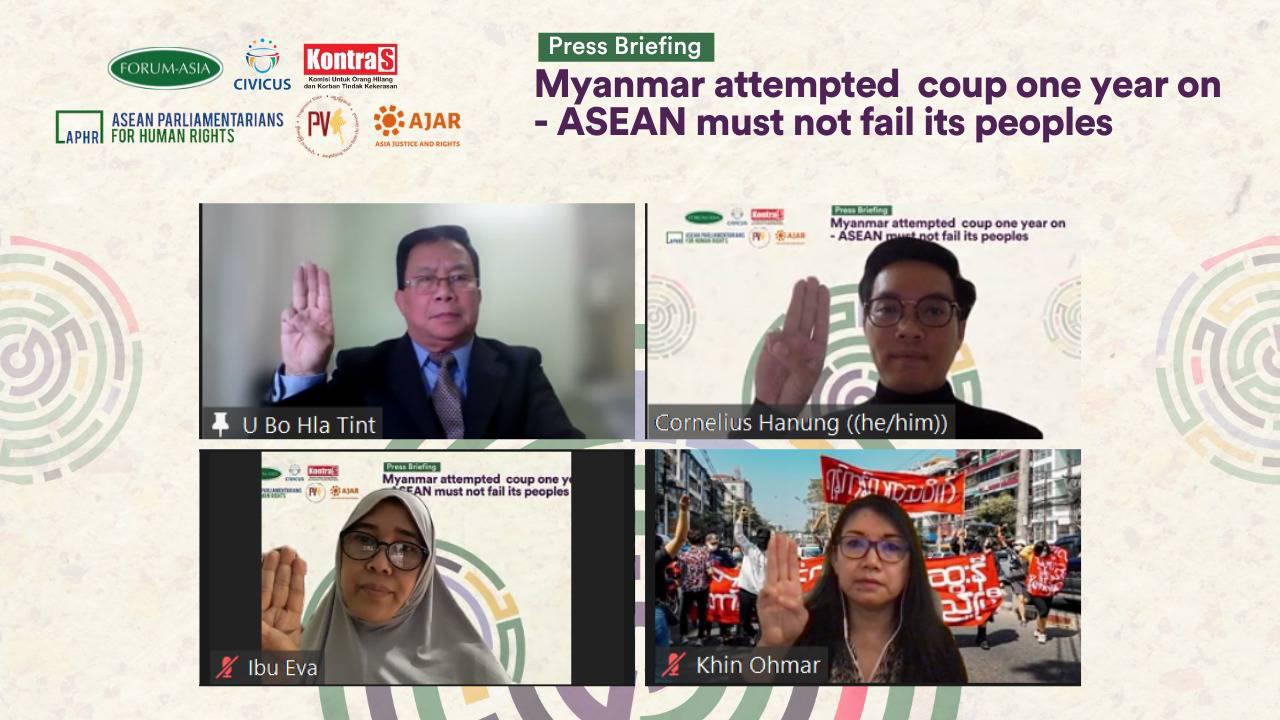 ‘ASEAN must urgently step up to address the atrocities in Myanmar,’ said human rights defenders from Myanmar and Indonesia in a press briefing held to mark the one year anniversary since the Myanmar military’s attempted coup.

Exactly one year ago in the early hours of 1 February 2021, the military detained the country’s leaders and announced it was seizing power. Since then, almost 1,500 people have been reportedly killed, while thousands have been detained, and many more tortured or sexually assaulted. The junta has launched airstrikes on ethnic minority communities, causing deaths, displacement, and widespread suffering. It has also attacked peaceful protesters, medical personnel, and journalists, while dismantling the country’s remaining democratic institutions, paving the way for it to rule with impunity.

The junta committed these atrocities even as they tried to convince the world that they represent the people of Myanmar.

‘The military junta’s deplorable actions since its illegal coup attempt have shown the whole world, including ASEAN, its true face. The junta has committed numerous abuses that amount to crimes against humanity and war crimes. ASEAN must not bestow legitimacy to Min Aung Hlaing and his terrorist gang by giving them a seat at the table,’ said Khin Ohmar, Chairperson of Progressive Voice.

‘As of today, Myanmar military terrorists have forcefully displaced over half of our population, unjustly imprisoned over 200 Karenni civilians, killed over 140 unarmed civilians, and burnt over 400 houses to the ground, including churches and religious buildings. This is part of their four-cuts military strategy ‒ denying our people food, funds, intelligence, and recruits. It is a brutal tactic which, while ineffective against such a popular resistance, results in mass human suffering. Despite the Thai border being an eight day walk, more and more internally displaced people are fleeing to the jungles in the west of Karenni State,’ said Hannah Mo, Secretariat Member of the Karenni State Consultative Council.

Despite these grave atrocities, ASEAN has failed to hold the junta accountable. The Five-Point consensus negotiated by ASEAN leaders remains unfulfilled. Cambodian Prime Minister Hun Sen’s visit to Myanmar has raised legitimate concerns that ASEAN would backtrack on previous collective efforts by the ASEAN body and ASEAN states to ban the junta from representing Myanmar.

‘A year after the attempted coup, the people of Myanmar continue their adamant calls for the rejection of the military junta, and for the country to be put back on the democratic path. ASEAN must help them in these efforts. The bloc’s response has been far from perfect, but as the main regional grouping, and as one of the few international actors with a direct line to the military, it still has an important role to play. It must hold the coup leader Min Aung Hlaing accountable to the Five-Point Consensus which he agreed to last April, while at the same time opening dialogue with the National Unity Government (NUG), composed of democratically-elected representatives chosen by the Myanmar people,’ said Eva Sundari, board member of ASEAN Parliamentarians for Human Rights and former Indonesian Member of Parliament

The speakers also celebrated the courage of the civil disobedience movement which had been an inspiration for social movements in Asia and globally. The National Unity Government (NUG) , formed by constitutionally elected parliamentarians, honour their courage through ensuring their voices are heard.

‘Even though it has been a year that has seen so many people sacrifice their lives to defy the most ruthless and inhumane military junta, and facing multidimensional difficulties and challenges, the morale of the people in Myanmar’s Spring Revolution remains resolute. We will end the military dictatorship and march in unity with confidence to a democratic federal union. With the strong and unwavering support of our people, we, the NUG are determined to strive even harder to engage with the people and leaders of ASEAN until we gain our rightful place and full cooperation of ASEAN as the legitimate government of the people of Myanmar,’ said Ambassador U Bo Hla Tint.

‘The situation in Myanmar is not just about Myanmar itself but a situation that is prevalent in ASEAN countries, where we also see and experience impunity and violations. We can use this situation as a benchmark as to how ASEAN should act. This situation is really concerning and we remain in solidarity with the peoples in Myanmar,’ said Fatia Maulidiyanti, an Indonesian human rights defender from KontraS.

The speakers agreed that the international community must no longer fail to respond to the crisis in Myanmar. They emphasised the need to hold the junta accountable not just for the coup, but for the genocide against the Rohingya, and the crimes against humanity against ethnic minorities and war crimes. Without such accountability, there cannot be any real peace.

They called on ASEAN and the international community to immediately recognise NUG as the legitimate representative of the people. They called on the Security Council to immediately act towards the protection of the Myanmar people. The international community can no longer depend on ASEAN. Without this immediate and sustained action, people will continue to suffer. .

Civic space in Myanmar is rated repressed by the CIVICUS Monitor

Seven human rights organisations expressed concerns about the deteriorating health of the activist...