Global alliance CIVICUS and the Civil Liberties Union for Europe are concerned about civic freedoms in Hungary following Viktor Orbán and his Fidesz Party’s landslide victory in April’s parliamentary elections, which were declared free but not fair.

A new research brief provides a snapshot of the recent decline in civic freedoms under the Orbán government which has repeatedly targeted civil society, independent journalists and LGBTQI+ rights. 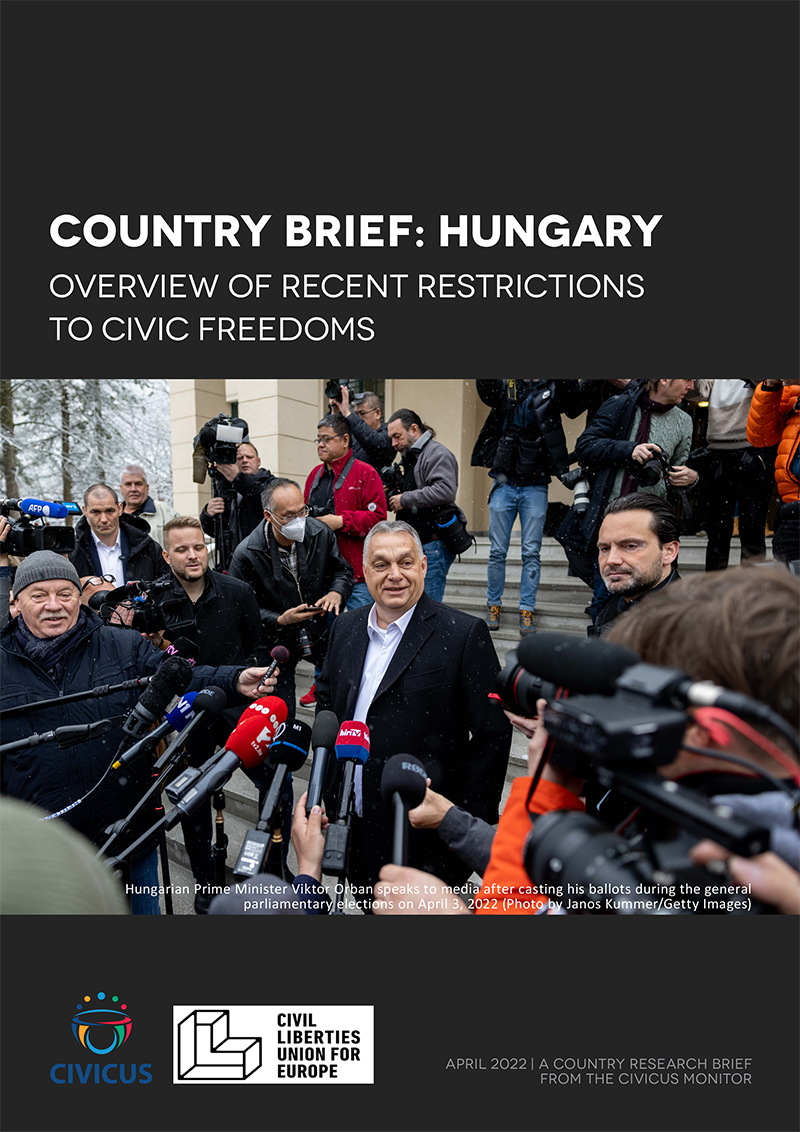 The government has politically captured key media regulatory bodies resulting in diminishing space for independent media to operate, with the public media sector now a de facto mouthpiece of the government.  The Organisation for Security and Cooperation in Europe (OSCE) found that the elections were not fair as there was “biased and unbalanced news coverage” in favour of the ruling party.

Threats to LGBTQI+ rights have continued unabated, with the government passing several laws that restrict and target these rights. Although the results of the government’s referendum on its ‘anti-LGBTQI+ propaganda’ law, which took place at the same time as the election, was declared invalid, 16 LGBTQI+ rights CSOs who campaigned against the referendum have been fined by the National Election Committee.

In the build up to the elections, Magyar Nemzet, a leading pro-government daily online site,  published secret recordings of interviews which were aimed at discrediting civil society and independent media and reshared by the Hungarian government. Similar methods were used to  smear civil society activists critical of the government during the previous general elections.

“During his victory speech, the Prime Minister took a moment to pinpoint his enemies which include civil society, bureaucrats in Brussels and the Ukrainian President. This is a clear signal that Orbán and his party will only continue to diminish civic freedoms. There is no doubt that attacks on civil society, independent journalism and LGBTQI+ rights will worsen in the coming years,” said Aarti Narsee, Civic Space Research Lead, Europe, CIVICUS.

The government has also continuously attempted to intimidate civil society. Although it repealed the Lex-NGO foreign funding law, which was found in violation of EU law, it introduced a new bureaucratic measure which requires the State Audit Office to report annually on the financial status of certain NGOs.

Surveillance of journalists is a tactic used by the government in an attempt to silence dissent, while denying independent media access to press conferences and information has become commonplace. The government recently went over a Supreme court ruling to pass a decree so that it can decide on press and media accreditation for journalists to access hospitals. It has repeatedly used the pandemic as a pretext to restrict access to information on COVID-19 for independent media.

“A pluralistic media landscape and a healthy  civil society guarantee citizens' access to reliable information about public matters. The Orban government has been doing everything in its power to undermine or eliminate both. By dominating most of the media landscape and trying to silence independent voices, the governing Fidesz party hopes to cement its power for the coming decades to dismantle democracy and cover up widespread corruption,” said Orsolya Reich, senior advocacy officer, Civil Liberties Union for Europe.

The European Commission has triggered its new rule of law conditionality mechanism which could see it cutting funds to Hungary. We call on the commission to act swiftly against Hungary through this mechanism.

“The European Union must stand up for the rights and principles enshrined in the Charter of Fundamental Rights of the EU and introduce strategies and legislation capable of reversing the democratic decline in Europe. It must design a well-thought-through European Media Freedom Act with strong guarantees and enforcement mechanisms, and a European civic space strategy capable of empowering democratic voices,” said Reich.

Hungary is currently rated Obstructed by the CIVICUS Monitor. There are a total of 43 countries in the world with this rating (see all). This rating is typically given to countries where civic space is heavily contested by power holders, who impose a combination of legal and practical constraints on the full enjoyment of fundamental rights (see full description of ratings). Hungary is one of two countries in the European Union with an Obstructed rating, the other is Poland.