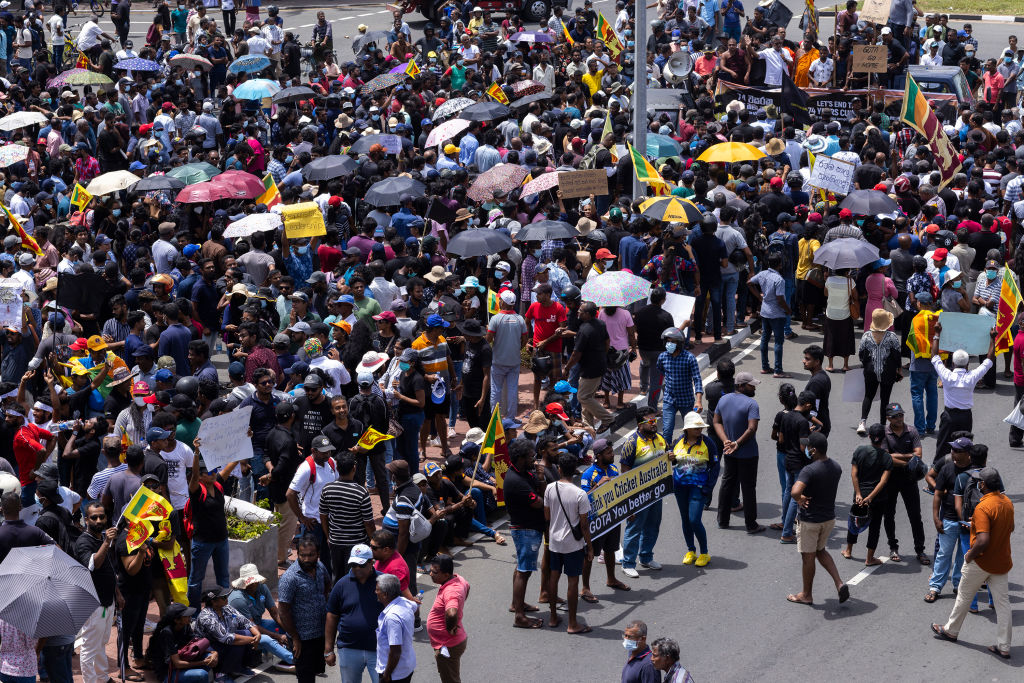 We, the undersigned organizations, condemn the Sri Lankan authorities' violent crackdown and increasing reprisals against peaceful protesters in Sri Lanka. This includes arrests, intimidation and the brutal attack on the protest camp in Colombo on 22 July 2022. The Sri Lankan authorities must ensure that security forces do not use excessive force and will respect the rights of peaceful protesters at the ‘Gotagogama’ site, which authorities have ordered to be vacated by 5:00 pm on 5 August 2022.[1]

On 18 July, while still acting president, Ranil Wickremesinghe declared a state of emergency, granting sweeping powers of arrest and detention to the police and armed forces. Emergency Regulations further embolden security forces and is a tool to threaten and further clamp down on peaceful dissent. Peaceful protesters and protest leaders are being criminalised, freedom of expression is arbitrarily restricted to forbid legitimate political expression, and the prosecution authorities are bringing excessive and disproportionate criminal charges for acts of civil disobedience in the midst of an unprecedented economic crisis.

It is also important to acknowledge that the current economic crisis derives from and aggravates widespread violations of economic, social and cultural rights. The Sri Lankan authorities should immediately stop reprisals against anti-government protesters and guarantee people’s right to free and peaceful expression of their grievances safely and without fear of arrest or violence. In addition to violating Sri Lanka’s binding obligations under international law, failure to respect human rights, both civil and political and economic, social and cultural rights may jeopardize and delay the country’s ability to respond appropriately to the economic crisis, including its ability to attract essential international support. In recent days, Sri Lanka’s allies have repeatedly called on the government to respect human rights, but their message has not been heeded.[2] Sri Lanka’s international partners should now make it absolutely clear that the government needs to uphold its human rights obligations.

As a State party to the International Covenant on Civil and Political Rights (ICCPR), Sri Lanka has an obligation not merely to respect and protect the rights to freedom of peaceful assembly and expression, but also to actively facilitate and promote their exercise. Under international law, to be lawful, any restrictions on these rights must meet the principles of legality, legitimate aim, necessity and proportionality.

Our organizations have documented attacks against protesters, media outlets, human rights defenders, and religious and civil society organizations following the swearing in of the new president and cabinet on 21 and 22 July, respectively. Below are details of such incidents.

In the early hours of 22 July 2022, a coordinated joint operation by the Sri Lankan military, police and special forces forcibly removed parts of the three-month long ‘Gotagogama’ rolling peaceful protest site located in front of the Presidential Secretariat in Colombo. Security forces severely beat protesters, journalists and lawyers and removed many tents from the pavement along the Galle Road outside the Presidential Secretariat, where dozens of people, including children, slept during the protests. They also evicted a small group of peaceful protesters who had occupied one of the rooms inside the Secretariat that had been opened to the public as a library, in an act of civil disobedience. Notwithstanding the fact that protesters had already announced their decision to hand over the building peacefully at 2:00 pm the same day,[3] without a warning or a request for the protesters to vacate the premises, security forces violently attacked them.

Under international human rights law, including the ICCPR, State authorities have a duty to respect, protect and facilitate peaceful protests. Moreover, law enforcement officers have a duty to exercise restraint in their use of force.[4]

Criminalization of protesters during the state of emergency

The undersigned organizations are especially concerned about incidents of arrest, intimidation, raids and disinformation against protesters, including those perceived as leading the protests, such as human rights defenders, trade union leaders, lawyers and journalists. The use of the state of emergency, combined with criminal laws and other legislation, such as the Public Properties Act, to quash protests and punish protesters is dangerous and an abuse of the law.

Since 22 July, under the Presidency of Ranil Wickremesinghe, legal reprisals against peaceful protesters and those perceived as protest leaders have increased. Protesters, including human rights defenders[5] have been charged with taking part in unlawful assemblies.[6] Peaceful gatherings in public spaces within sight and sound of the intended target of the protest cannot be deemed an unlawful assembly. They must in fact be facilitated. Any arrests made solely on these grounds, i.e., for taking part in a peaceful protest (which remains peaceful) or for attending a peaceful protest in spite of a court order against it, where a restriction of the freedom of peaceful assembly has neither been necessary nor proportionate, should not constitute a criminal offense, and any arrests solely based on these charges would be in violation of Sri Lanka’s obligations under international human rights law, including under the ICCPR.

Protesters involved in largely peaceful demonstrations have been charged with other criminal offenses, such as damaging public property and unlawful entry.[7] In responding to cases of civil disobedience, Sri Lankan authorities should ensure the charges brought against protesters are commensurate with the offenses committed to ensure they are not excessive or disproportionate. In this context, our organizations are concerned by statements of Members of Parliament of the ruling party and the President[8] labelling some protesters as “terrorists”.[9]

We are further concerned by the selective application of the law to target some protesters.[10] Since 9 July, when four government buildings were breached during protests and peacefully occupied by protesters, tens of thousands of people,[11] including families with children, streamed in and out of these buildings without compromising the security of any officials or putting anyone in harm’s way, in full view of law enforcement officers who made no attempt to discourage their entry. In such circumstances, it is seemingly unnecessary and disproportionate for law enforcement officers to bring charges of unlawful entry and trespass in a selective manner in the absence of evidence of criminal intent.[12] The United Nations Human Rights Committee’s General Comment 37 on the right of peaceful assembly affirms that State parties must ensure that laws and their interpretation and application do not result in arbitrariness or discrimination in the enjoyment of this right.

In cases where serious charges may be brought against anti-government protesters,[13] where significant evidence exists, we urge authorities to use only ordinary criminal laws and not to resort to the draconian Emergency Regulations.

On 27 July, Parliament approved new Emergency Regulations that give sweeping powers to the police and the armed forces of search, arrest and detention of “suspects” without due process safeguards.[14] The regulations impose severe penalties, including life imprisonment, for offenses such as causing “mischief”. Detainees can be kept in custody for up to 72 hours without being brought promptly before a judge and without access to lawyers of their choice, in violation of the ICCPR. Detention in such circumstances heightens the risk of detainees being subjected to torture or other ill-treatment.

Our organizations are deeply concerned by reports that journalists who have been covering the protests have been targeted by the authorities. At least two journalists were beaten during the joint operation by the Sri Lankan military, police and special forces on 22 July. Others were threatened and prevented from accessing the site. Since then, journalists and those broadcasting on social media have been arrested, interrogated and had criminal cases filed against them for their work. On 27 July, a group of unidentified people who claimed to be from the police reportedly visited the offices of Xposure News, interrogated an employee and demanded to see security footage.[15] Journalists and others involved in monitoring or reporting on protests are entitled to protection under the ICCPR.[16]

In many of the cases documented by our organizations, the authorities have failed to produce warrants at the time of arrest and to promptly inform people of the reasons for their arrest. Many protesters who have been detained have complained that they were not told where they were being taken, and many have also been denied access to legal counsel. These abduction-style[17] arrests violate the rights to liberty and security of person and to a fair trial and have brought back fears of enforced disappearances,[18] placing detainees outside the protection of the law and at risk of ill-treatment and torture. Arbitrary deprivation of liberty and torture are prohibited absolutely in all circumstances and constitute peremptory norms of international law, including during states of emergencies.[19] Article 9 of the ICCPR specifically protects the right to liberty and security of person, and prohibits arbitrary detention. This prohibition is an essential corollary to the right to liberty. As clarified by the UN Working Group on Arbitrary Detention, an arrest that is pursued solely on the basis of the peaceful exercise of human rights or that is the result of the violation of fair trial rights is arbitrary. [20]

In light of Sri Lanka’s international human rights obligations, we urge the Sri Lankan authorities to,

[1] See: Newswire, GotaGoGama protesters given deadline to go home, 3 August 2022. On 5 August, the Attorney General assured the Court of Appeal that the unauthorised structures will not be removed without following proper legal procedures. See: Newswire, Removal of ‘GotaGoGama’: Update from Court, 5 August 2022

[3] The decision was publicised using multiple channels. Some of them compiled here: https://docs.google.com/document/u/0/d/1aJM5VY-5BZoyS8ylv0EATQIzdctSq4pNwN9x7qiqT4Q/mobilebasic

[6] The Guardian, Sri Lanka extends state of emergency as police round up protest leaders, 28 July 2022

[7] For example, four protesters were arrested on the morning of 26 July near the S.W.R.D. Bandaranaike statue in the peaceful protest site ‘Gotagogama’ for breaking a court order issued on 20 July barring entry within a 50-meter radius around the statue upon a Police request to ensure the protection of the statue. See more: The Morning, Four arrested for standing near S.W.R.D. statue, 27 July 2022,.

[9] Ruling party MPs in parliament claimed that invading government property and occupying the premises are acts of terrorism. See for e.g.: Twitter thread; The Week, Emergency extended in Sri Lanka till August 14, 28 July 2022

[12] In a speech made by the President on 3 August, he stated, “If there are individuals who have participated in such illegal activities either unknowingly or due to the influence of others, a plan will be prepared to act sympathetically towards them.” See more: Newswire, Parliament: President’s speech during inauguration of 3rd session, 3 August 2022,

[15] Xposure news, An unknown group, claiming to be the police, broke into the building where Xposure was located(news item in Sinhala, 27 July 2022) and Human Rights Watch, Sri Lanka: Heightened Crackdown on Dissent, 2 August 2022

[16] In its General Comment 37, the UN Human Rights Committee has stressed that they may not be prohibited from, or unduly limited in, exercising key functions, including monitoring the actions of law enforcement officials. They must not face reprisals or other harassment, and their equipment must not be confiscated or damaged. Even if an assembly is declared unlawful or is dispersed, that does not terminate the right to monitor.

[17] In at least one case, the arrest was carried out by police officers in civil clothing.

Civic space in Sri Lanka is rated as Obstructed by the CIVICUS Monitor.

The 51st regular session of the Human Rights Council will run from 12 September to 7 October, and...