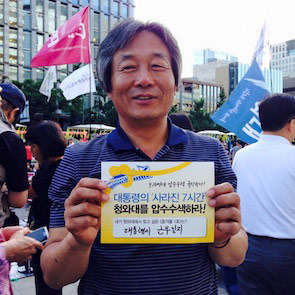 CIVICUS speaks to Lae-goon Park, director general of Human Rights Center (SARAM) and a steering committee member of Coalition 4.16 on the Sewol Ferry Disaster, about the environment for civil society and the ongoing mass protest movement in South Korea. Park was recently sentenced to three years in prison for exercising his legitimate right to protest.

Q: A protest movement has emerged in South Korea in response to the government’s failure to adequately investigate the causes of 2014 Sewol Ferry disaster, in which hundreds of children drowned. Can you tell us about the origins and current state of the movement?

When the Sewol Ferry sank off the South-West Coast of South Korea on 16 April 2014, people voluntarily held a series of candlelight vigils across the country, calling for the safe return of the passengers. However, when 304 people were discovered dead (including nine who remain missing), these candlelight vigils evolved into protests criticising the government’s failed rescue measures and calling for an independent investigation into the tragedy. Based on these protests, and pan-national petition campaigns, the Special Law on the Sewol Ferry Tragedy was enacted in November 2014 creating an independent investigative body into the tragedy, the Special Investigation Committee. The investigative was expected sanction those responsible, and establish a framework of laws to enhance due diligence for public safety. However, the government is not fully cooperating with the Special Investigation Committee and has attempted to undermine its independence and efficacy by appointing pro-government officials, not allocating sufficient resources and or allowing full access to all necessary sources of evidence and information. In addition, the ruling party has issued a number of public statements critical of the work of the Special Investigation Committee in attempts to undermine its credibility.

As a consequence, an organised and sustained protest movement has emerged that includes Sewol victims’ families, civil society and concerned South Koreans, to pressure the government and the National Assembly to guarantee the independence and full cooperation with the Special Investigation Committee. The movement, under the auspices of the Coalition 4.16 on the Sewol Ferry Disaster, has undertaken campaigns and activities in 100 locations across South Korea and in about 30 cities abroad. Currently, the Coalition 4.16 on the Sewol Ferry Disaster is focusing on amending the Special Law on Sewol Ferry Tragedy and undertaking a number of campaigns in support of good and accountability governance

Q: What restrictions have protestors and organisers faced for participating in these protests?

Until 2015, protests concerning the Sewol Ferry tragedy were largely prevented from taking place without unwarranted obstruction due to the stringent restrictions imposed by the government. The police blocked the protests using police bus barricades and prevented people from marching to the president’s office. They also arbitrary and excessively used water cannons and took photographs of participants to collect evidence on those taking part in the protests deemed ‘illegal’. Participants of the protests were summoned and/or fined and even sometimes detained which has created a chilling effect on freedom of assembly and discourages others from participating. To address these restrictions, we have established a committee to provide legal aid and financial support to those engaging in the protests.

Q: In recent months, several members of the Korean Confederation of Trade Unions have been arrested and detained for their role in the protests. What reason has been given for their arrest and what is the status of their cases?

In April 2015, the 4.16 Sewol Families for Truth and A Safer Society and the Coalition 4.16 on the Sewol Ferry Disaster organised a large public event commemorating the one-year anniversary of the Sewol ferry tragedy. The Korean Confederation of Trade Unions (KCTU) also actively supported the demonstrations. During the demonstrations, the police used bus barricades and indiscriminately used pepper spray while several protestors were arrested and detained on site for using violence against the police and damaging police buses. Most of those arrested were released on probation at the first trial while others remained detained. The prosecutor’s office later issued an arrest warrant for Sang-kyun Han, President of the KCTU, for helping to organise the demonstration. The Prosecutor’s office has since sought an 8-year sentence for Han. The court is expected to make its final judgment on Han’s case on 4 July 2016.

Q: Do you feel this clampdown on the Sewol Ferry protests in emblematic of a growing intolerance for dissent in the country?

Yes, I do. In South Korea, protests have been unjustifiably limited by the Assembly and Demonstration Act which unduly restricts the right to freedom of assembly. Also, the police apply double standards towards protests. The police frequently reject protest notification when groups critical of government policy attempt to organise demonstrations and forcibly prevent the demonstrators from marching to the president’s office. However, when pro-government protests are organised they are never rejected and they are not subjected to the same limitations.

The government has also utilised judicial harassment to punish and silence those involved in the protest movement. For instance, I was detained for almost three months and indicted, while my colleague, Hye-jin KIM (steering committee member of the Coalition 4.16 on the Sewol Ferry Disaster) was indicted without detention. Both of us were found guilty at our first trial in which I received three years imprisonment and four-years probation, including 160 hours of community service. Kim received a two-year prison sentence, three-years probation and 120 hours of community service. I am currently appealing the case at the higher court and expecting the final judgment on 30 June 2016.

The government is not taking responsibility for this tragedy in which more than 300 people lost their lives due to preventable negligence which the state has failed to adequately investigate. Rather, the government is mobilising pro-government media, politicians from the ruling party, and partisan organisations to suppress peoples’ right to dissent and harass activists calling for the truth to be revealed about the Sewol Ferry tragedy.

Q: How can regional and international civil society groups support the exercise of the right to freedom of assembly as well as the Sewol Ferry protest movement?

Park has been working as a human rights defender for 28 years in South Korea. He began advocating for the protection and promotion of human rights following his brother’s self-immolation in 1998 to protest against the Gwangju massacre. Later he joined the SARANGBANG Group for Human Rights where he worked for over 20 years. Park is currently the director general of the Human Rights Center SARAM which is an affiliated organisation of Human Rights Foundation SARAM which was established to support human rights organisation and activists in South Korea. Park focuses on state violence and state crimes and is currently a standing member of the Steering Committee of Coalition 4.16 on the Sewol Ferry Disaster which advocates for transparency and accountability for the Sewol Ferry disaster.