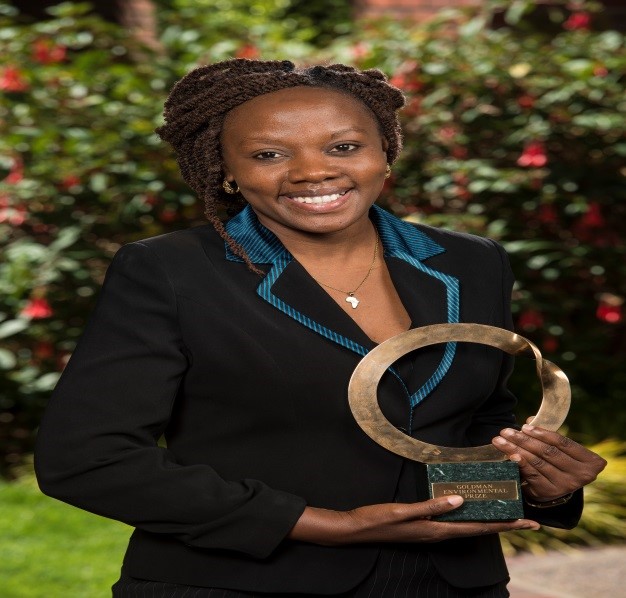 CIVICUS speaks to Phyllis Omido, a Kenyan grassroots environmental activist about the challenges faced by activists for environmental rights in the country. She is a co- founder of the Center for Justice, Governance and Environmental Action (CJGEA), an organisation that advocates for the rights of marginalised communities in the coastal belt of Kenya. She was Africa’s recipient of the Goldman Environmental Prize in 2015 and is known for organising protests and shutting down a lead smelting plant located in the middle of Owino Uhuru, a slum near Mombasa.

1. Can you explain the rise in numbers of environmental rights activists in Kenya and the circumstances they are operating under?

The main cause for the rise in the numbers of environmental rights activists  is business encroaching on human territory, pollution, displacement of communities by the state and corporate activities, wanton destruction of mangrove trees and deviation of water bodies among other reasons. This affects the livelihoods of poor communities forcing them to seek protection of their fundamental rights. When trying to follow available channels to advocate for rights, access to information, lack of public participation and access to justice are impeded by business with facilitation of the state.

2. What are some of the most pressing threats environmental rights defenders in Kenya face?

Many environmental rights defenders work in a very hostile environment. Many activists and I have faced physical attacks by hired assailants, arbitrary arrest, and judicial harassment. We have also experienced raids on our offices, torching of homesteads, surveillance and character assassinations.

3. How do corporate and business interests affect the livelihood and natural resources of communities?

In Owino Uhuru we saw the only source of free water being poisoned, the air polluted and the soil poisoned. The community could not farm anymore and had to buy water that they could hardly afford and had to use the polluted water for their daily needs.

This in turn caused sicknesses and deaths as the community consumed water polluted with toxic heavy metals. For example, the story of an orphan boy Kelvin living with his grandmother who accidentally stepped in an acid effluent and his foot was instantly destroyed. He tested positive for lead poisoning and became so ill that his aged grandmother Scholastica Shikanda had to quit her job as a tailor in a garment exporting industry to care for him as he could no longer attend school. She was so poor that she even became homeless. With his only home polluted the child had two options to die or relocate away from the source of exposure, they were too poor and therefore ended up in a children’s home where Scholastic had to volunteer to do free manual labour in exchange for meals to feed herself and Kelvin.

4. Describe some of the lessons from CJGEA’s “media as a tool” project

Since 2009 CJGEA has been working on an advocacy campaign for the Owino Uhuru community that was exposed to toxic heavy metal poisoning from a government-licensed smelter. We noted over the years that whenever we carried out a demonstration and it was covered by media, the state through the then ministry of Public Health (Now Ministry of Health) and the National Environmental Management Authority would rush to close the smelter only for it to reopen a week or two after. This happened from 2009 until 2013.  We then developed the “Media as a tool for the realisation of environmental justice and socio-economic rights in Kenya project” which was aimed at using the media to highlight the violations of environmental rights. The most impact in all our advocacy was felt during the “media as a tool” project in 2015 to 2016.

Because of the project we saw the state taking immediate action to counter the injustices that were happening in the Owino Uhuru community. The government sent a team to carry out a study to quantify the impact of pollution on the health of citizens and the environment.  After that, an expert task force was asked to write a report on the appropriated scientific interventions that could be taken. Some community member’s accessed free medical intervention through the county government and the Director of Public Prosecutions opened an enquiry into the activities of the smelter. The Standard Media Group said they were inspired by the Owino Uhuru campaign and they launched a newspaper called The Defender to highlight such issues faced by the community.

On the other hand many human rights defenders were targeted by politicians who have interests in the smelter. We had to relocate many and some sought asylum as the government begun probing into the issues surrounding the smelter. Our organisation was infiltrated and documents stolen and emails hacked. We engaged a communication consultant who came up with a media and communication policy including information flow, storage, dissemination and destruction policy to ensure our information is safe. The Director of Public Prosecution sent a team of investigators to our offices and they control of the office for one week and went through many document that might have compromised some of our human rights defenders. We thereafter implemented a system in which we identified them by codes rather than names thus protecting them in case such incidents recur.

Two categories of environmental rights activists exist in Kenya ─ the elite conservationists working in the areas of animal poaching and conservation. These ones are well recognised and supported locally and internationally. However the grassroots movements focusing on business and human rights are locally seen as anti-development actors and thus get no support from the state and somehow also from international actors. International civil society organisations must partner with the grassroots activists and communities in advocacy, capacity building, protection, litigation and resource mobilisation. Global civil society can also mobilise and lobby Kenyan diplomatic missions to assist activists who seek to hold big corporates to account. International civil society organisations have capacity to reach international media, the United Nations and other international human rights systems and mechanisms that might be hard for us in the grassroots to reach.