JOINT STATEMENT: Bahrain elections must not be used to cover human rights violations 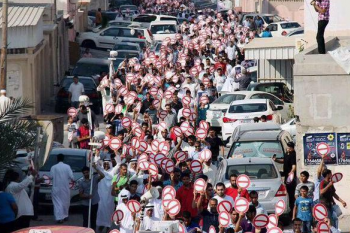 On 22 November 2014, Bahrain’s citizens will be called to cast their votes for legislative and municipal elections. The elections will be the first to take place since the people of Bahrain took to the streets and squares of the Kingdom in February and March 2011, demanding more openness in the political process and sustained reform to enlarge the space for freedoms and rights enjoyed by Bahraini citizens. Since then, the government of Bahrain has violently repressed any attempt to denounce the human right situation in the country and thwarted any attempt to establish a meaningful and inclusive political dialogue with the opposition. Peaceful protesters, human rights defenders and democracy advocates continue to face extra-judicial detentions, imprisonment, ill treatment and torture in detention centres.

In June 2011, the King of Bahrain announced the establishment of the Bahrain Independent Commission of Inquiry (BICI), headed by Professor Cherif Bassiouni, and charged to investigate the events of February and March 2011. This could have been the first of the Arab Spring’s transitional justice efforts, even if limited in scope, and a tool to erode Bahrain's longstanding culture of impunity by creating a sense that people violating human rights will be held accountable for their actions. Many people held very high hopes for what would become known as the “Bassiouni Commission”, instead, it was the start of a chequered history. To date, the promising stance of the government has not turned into concrete action. While the Bahrain government did address some of the issues raised by the BICI report, its key and most sensitive recommendations have not been implemented and only partial and sluggish reforms have been carried out. This situation has continued to fuel sectarian hatred and a culture of impunity and cover-up, which has only reinforced reactionary forces on all sides.

The 2014 elections will certainly be used as a cover for the ongoing human rights crisis. These elections are sure to be considered neither inclusive, with the opposition societies feeling unable to participate, nor a sign of political reform, in a country that continues to be plagued by flagrant abuses of human rights.

The main coalition of opposition societies has taken the decision not to participate in these elections, due to a lack of serious reform having taken place, since their decision to leave parliament at the start of the crisis in February 2011. Bahrain’s parliament remains a mere talking shop, with little tangible power to either legislate or hold the government to account. Meanwhile, human rights abuses are continuing at a consistent rate, notably the recent detention of human rights defenders Nabeel Rajab, Zainab Al-Khawaja and Ghada Jamsheer. These figures join dozens of other prisoners of conscience, including Abdulhadi Alkhawaja, Ibrahim Sharif, Dr. Abduljalil Al-Singace, Hasan Mashaima and Abdulwahab Hussain, who are denied the chance to express their opinions or to be included in any electoral venture.

Were the government of Bahrain serious about this election serving as a turning point for the country, it would have engaged in a meaningful dialogue with the opposition first, in order to reach a national consensus on a program of reform. Without this, the election serves only as a continuation of the status quo and will do little to take Bahrain forward.

The response of the international community to the continued and violent assault on Bahrainis’ civic and political freedoms, so far, has been weak and deaf to the plight of the Bahraini citizens. A few weeks ago, Ambassadors of EU member states in Bahrain issued a joint communique which completely omitted any condemnation of the ongoing human rights violations in Bahrain and instead urged the opposition to reconsider their boycott of the upcoming elections. Such statements from Bahrain’s allies only serve to entrench tyranny and embolden anti-democratic voices.

The international community has a responsibility to ensure that the Bahraini authorities do not persist in their “smoke screen” strategy rather than complying with their international obligations. We believe that the non-participation in mock elections is a fundamental political right of the Bahraini opposition groups and a non-violent method of political expression of their dissatisfaction with the political deadlock and the lack of political reforms.

The international community should use the opportunity of this round of elections in Bahrain to finally use their influence to end violations of human rights, starting with the immediate and unconditional release of human rights defenders and all those arbitrarily detained for exercising their right to freedom of expression and peaceful assembly. The international community should refuse to be satisfied by an exclusive electoral process and instead to push for a real and inclusive dialogue with the opposition to reach a national consensus on a serious reform program.

The upcoming elections in Bahrain cannot and must not be used to cover human rights violations.