CUBA: ‘Dissidents are in the millions; there aren't enough jail cells for so many people’ 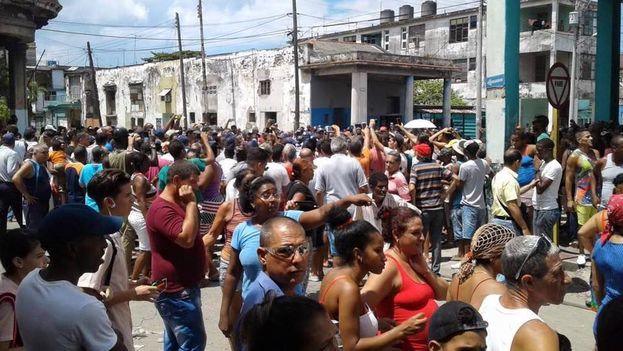 Successful protest in the El Cerro neighbourhood, Havana, in demand for the restoration of electricity and water services, 13 September 2017.

The CIVICUS Monitor rates the space for civil society – civic space – in Cuba as ‘closed’, indicating a regime of total control where it is difficult to even imagine the existence of protests. Is this what you see?

Absolutely. Cuba is a closed society, anchored in Stalinism not only politically but also economically, as the state suffocates or blocks the initiatives and entrepreneurial talent of citizens, a phenomenon known as ‘internal blockade’. The state denies individual autonomy and crushes any independent association to maintain a balkanised society. This is, they believe, how they can ensure state control over citizen behaviour.

In the 1990s, after the fall of the Soviet Union, it was clear that Cuba would have to make a transition to survive. The geopolitical ecosystem that had sustained it with infinite and massive subsidies collapsed alongside Eastern European communism. We all thought – and not because we believed in the so-called ‘end of history’ – that the only possible transition was towards some form of open society, political democracy and market economy. It could be more or less social democrat or liberal, but it should be based on those pillars in any case. Some of us pushed for that transition from reformist positions. We were wrong.

In the end, the transition that did take place was neither the one advocated by Marxism, towards communism, nor Francis Fukuyama’s, towards a liberal state and a market society. We transitioned towards a transnational mafia state instead. This is not about giving it yet another pejorative label: this is the reality revealed by the analysis of the changes that have taken place in the structuring of power and social classes, the instruments of domination and the mechanisms for the creation and distribution of wealth. There has been a real change in the DNA of the governance regime.

Real power is now more separate than ever from the Communist Party of Cuba. It is in the hands of a political elite that represents less than 0.5 per cent of the population, in a country that has abandoned even the ideology of the communist social pact that pushed the idea of submission based on a commitment to basic social rights, which were granted at the price of the suppression of all other rights.

In early 2019 a constitutional reform process took place that did not create any significant change in terms of opening civic space. An image of change was projected externally that contrasted starkly with the internal reality of stagnation. Some phrases placed in a speech or in the new Constitution itself have served to feed eternal hopes that leaders – who are not held accountable by the public – will see the light on their own and create the necessary change. This also distracts the attention of international public opinion from the monstrosity born out of collusion with Venezuela.

How would you describe the current conditions for the exercise of the right to protest in Cuba? Is there more space for people to make demands that are not regarded as political?

There is no greater political, legal, or institutional space for the exercise of the right to protest, but citizens are creating it through their own practices. All rights proclaimed in the Constitution are subordinate to the regulations established by supplementary laws and regulations. In the end, the Constitution is not the highest legal text, but one subordinated to the legality created by other laws and regulations. An example of this is the Criminal Code, which includes the fascist concept of ‘pre-criminal danger’, by virtue of which an individual can spend up to four years in jail without having committed a crime. Nonetheless, conflict and protests have increased.

The government has changed its repressive tactics towards political opponents to project a more benevolent outward image. Instead of long prison sentences it now resorts to thousands of short-term arbitrary detentions. Instead of holding acts of repudiation outside a meeting place, it now suppresses meetings before they happen, arresting activists in their homes. Instead of refusing to issue them passports or throwing activists in jail for attending a meeting abroad, it now prevents activists from boarding their flights. If a member of the opposition is put to trial, this is done not on the basis of accusations of political subversion but for allegedly having committed a common crime or for being ‘socially dangerous’.

At the same time, Cuban citizens – more than half of whom now live in poverty according to respected economists based in Cuba – have increasingly serious and urgent needs, the fulfilment of which cannot wait for a change of government or regime. In a different context these would be ‘personal problems,’ but in the context of a statist governance regime, which makes all solutions depend on state institutions and blocks all autonomous solutions, whether by citizens or the private sector, these become social and economic conflicts of citizens against the state.

At this point it is important to establish a difference between opposition and dissent. Opponents are those who openly adopt, either individually or collectively, a contesting political stance towards the government. A dissident, on the other hand, is someone who feels deep discomfort and disagreement with the governance regime because it blocks their basic needs and dreams of prosperity. Social dissidents tend not to express themselves in a public way if they do not believe this will help them achieve concessions on a specific demand. But if their situation becomes distressing, they move – often spontaneously – from complaining and lamenting privately to protesting publicly.

Over the past two years there has been a notable increase in protests for social and economic reasons. These protests do not have legal protection, as the right to public demonstration is non-existent. However, the state has often preferred to appease these protests rather than react with force. Given the degree of deterioration of living conditions – and the even more deteriorated legitimacy of the authorities and the official communist ideology – Cuban society resembles a dry meadow that any spark can ignite.

Domination by the political elite has been based more on control of the social psychology than on the resources of the repressive apparatus. As a result of the Great Terror of the 1960s, 1970s and 1980s, with firing squads that never stopped and the handing out of 30-year prison sentences for insignificant issues, three generations were formed on the false premise that ‘there is nobody who can knock down or fix this’. This has been the guiding idea of a pedagogy of submission that is now in crisis.

The factors that have most influenced the current change in citizens’ perspectives and attitudes have been, on the one hand, the breakdown of the monopoly of information that has resulted from new digital technologies, the leader’s death and the gradual transfer of power to people without historical legitimacy to justify their incompetence. On the other hand, the accelerated deterioration of living conditions and the country’s entire infrastructure turns everyday life into a collection of hardships. Health and education systems, food, medicine, the transportation system and cooking gas and gasoline supply are in a state of collapse. Hundreds of multi-family dwellings are also collapsing and people waste their lives demanding, waiting for years for a new home or for their old home to be repaired. Many also lose their lives among the rubble when buildings collapse.

In this context the social dissident, who had remained latent and silent, goes public to express their discontent and demand basic social rights. They claim neither more nor less than the right to dignity, to dignified conditions of existence. And unlike political opponents, dissidents are not in the thousands but in the millions. There are not enough jail cells for so many people.

How did the Cuban Observatory of Conflicts come into existence?

The Cuban Observatory of Conflicts emerged in Cuba as an idea of a group of women who had previously created the Dignity Movement. In its origins, this movement had the mission of denouncing pre-criminal dangerousness laws (i.e. laws allowing the authorities to charge and detain people deemed likely to commit crimes, and sentence them to up to four years in prison) and abuses in the prison system, against any category of prisoners, whether political or not.

From the outset this was an innovative project. It was not conceived as a political organisation or party, but as a movement, fluid and without hierarchies, fully decentralised in its actions, without an ideology that would exclude others.

For two years these women collected information about prisons and the application of pre-criminal dangerousness laws. Their work within Cuba fed into reports to the United Nations Human Rights Committee and the Organization of American States’ Inter-American Commission on Human Rights. They placed the letter ‘D’ for dignity, which identifies their movement, in public sites as a reminder to the political police that they had not been able to crush them.

However, the original mission of the Dignity Movement was too specific for a movement whose name was such a broad concept. Nowadays, Cuban citizens’ struggles are primarily for living conditions, for the full respect of their human dignity. This is thy the Dignity Movement expanded its mission to supporting citizen groups in their social and economic demands, without abandoning its initial objective. To fight back against the psychology of submission and replace it with another one based on the idea that it is possible to fight and win, the Dignity Movement now has a specific tool, the Cuban Observatory of Conflicts.

Can you tell us more about how the Observatory works?

The philosophy on which the Observatory is based is that life should not be wasted waiting for a miracle or a gift from the powerful; you have to fight battles against the status quo every single day. In just one year we have successfully accompanied about 30 social conflicts of various kinds that had remained unresolved for decades, but now obtained the concessions demanded from the state.

What has been most significant is that when the authorities realised that these citizens were mentally ready to go to public protests, they decided to give them what they demanded, in order to prevent an outburst and to take credit for the result, although this would never have been achieved in the absence of citizen pressure. They showed their preference for occasional win-win solutions to avoid the danger of a viral contagion of protests among a population that is fed-up with broken promises. Each popular victory teaches citizens that protesting and demanding – rather than begging and waiting – is the way to go.

The method is simple: to generate a collective demand that has a critical number of petitioners who identify with it and subscribe to it, and send negotiators to request a solution, clarifying that they will not accept negative, delayed responses or a response that does not identify the person responsible for its implementation. At the same time, information is filtered to social media and digital media covering Cuba. That is the way to go along the established roads in a constructive way. What is new here is that it is made clear that if an agreement is not reached and its implementation verified, people are willing to take nonviolent public actions of various kinds.

Civic space in Cuba is rated as ‘closed’ by the CIVICUS Monitor.
Get in touch with Observatorio Cubano de Conflictos through its webpage and Facebook profile, or follow @conflictoscuba on Twitter.