GUATEMALA: ‘Criminal law is being used as a weapon of political persecution’ 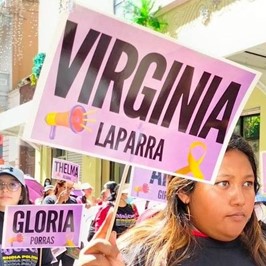 CIVICUS discusses corruption in Guatemala and the criminalisation of anti-corruption activism with Claudia González, former member of the International Commission against Impunity in Guatemala (CICIG) and Virginia Laparra’s defence attorney.

Virginia Laparra is a former prosecutor of the Special Prosecutor’s Office against Impunity (FECI) who has recently been unjustly sentenced to four years in prison. The #LibertadParaVirginia (#FreedomForVirginia) campaign is mobilising in response.

What role did CICIG play, and why was it shut down?

CICIG began its work in late 2008 and I joined in 2011, when the second commissioner, Francisco Dall’Anese, was finishing his term. Back then we were focused on closing all pending cases in an orderly fashion. But with the arrival of Iván Velázquez as head of CICIG, work was redefined and we started to focus on the major problem of the lack of progress in the few cases we brought to court.

To tackle this, we were divided into groups, and I was assigned to the team in charge of judicial corruption. This redefinition entailed the undertaking of proactive investigation; we had to define which cases to prioritise. We were under a lot of pressure to move forward as many cases as we could because we did not know how long CICIG’s mandate would last. The situation in Guatemala was quite difficult politically.

Finally, we were able to have CICIG’s mandate extended and pending investigations were put on track. As a result, we were able to expose corruption in the legislative, judicial and executive branches of government, including in the Ministry of the Interior.

It was all very intense and we were overwhelmed by the number of cases we had to handle. In spite of everything, we were able to build large corruption cases with solid evidence, including not only testimonies but also bank statements that proved the corruption of high-ranking officials.

CICIG was shut down in 2019, and I believe this happened because we touched nerve points of corruption in Guatemala. We touched the private businesses that financed political parties. During the presidency of Jimmy Morales, in power between 2016 and 2020, we touched very high-ranking officials. I think that attacking them all at once was not the best strategy.

How did the public and the government react to CICIG’s findings?

While part of the public was aware of CICIG’s work, when the interests of certain groups began to be affected, things became difficult, as those affected orchestrated a campaign against CICIG, criticising the way in which the investigations were carried out and manipulating issues that are sensitive in Guatemala, such as the use of pretrial detention.

The government, for its part, never did anything in response to the corruption cases uncovered by CICIG, particularly when responding would have required a change of internal regulations and the structure of institutions where corruption nested. On the contrary, the government has done everything possible to keep things as they were and has continued favouring corruption.

A very clear example of this was the case of Congress’s ‘phantom positions’. CICIG found that each legislator hired up to 30 staff, but much of the money went into their own pockets, since most of the people hired never actually went to work. Instead of reviewing and changing regulations to fight corruption, politicians sought ways to evade accountability in situations like this.

The problem of corruption in Guatemala is absolutely structural. The theft of state money is enabled. No government official lifts a finger without first asking for money in return. They all use the people’s money for their personal purposes. As next year we have elections, it is obvious that the current budget is being used to fund electoral campaigns.

I am surprised that people do not say or do anything about it, although I understand that widespread fear holds many people back.

Why has Virginia Laparra been tried and convicted?

Virginia Laparra is a career prosecutor with 16 years of experience in the Public Prosecutor’s Office. In 2016 she was appointed prosecutorial agent of the FECI, then led by Juan Francisco Sandoval. Her work consisted in following up on some cases in the interior of Guatemala, in Quetzaltenango, Totonicapán and surrounding areas.

In 2018, FECI and CICIG filed several administrative complaints before the Judicial Disciplinary Board against Judge Lesther Castellanos, in charge of the High-Risk Court of Quetzaltenango. One of the complaints referred to the leaking of information from a case under reserve to a lawyer. As a result of this complaint, in May 2018 the Judicial Disciplinary Board sanctioned Judge Castellanos for having leaked confidential information and suspended him from duties for five days without pay. In retaliation, in June Judge Castellanos filed a criminal complaint against Virginia Laparra for crimes of false testimony, usurpation of powers and abuse of authority, arguing that she did not have the authority to file the administrative complaint against him, which only could be done by the attorney general.

Sandoval was removed from office in July 2021 and is currently in the USA, seeking asylum on grounds of political persecution. Virginia was arrested in February 2022 and charged with ‘continuous abuse of authority committed against the public administration’.

I am the attorney handling Virginia’s case. I have examined the file a number of times and I can affirm that there is not a single shred of evidence against her. The only substantial things in her file are four certifications documenting the complaints filed by Virginia in 2018 – although there is no stamp of receipt of the complaints, which casts doubt on when the acts were actually committed – along with a report by some investigators indicating the place where she went to file those complaints, a photo of the place where she worked and a photo of the stamps she used to sign those complaints. I wonder how it is possible to have a person spend almost 10 months in custody for a complaint lacking any evidence.

After spending almost 10 months in prison Virginia was subjected to a trial that lasted little more than a week, and in which all the witnesses were police officers and civil servants, in addition to the judge she had investigated. All the appeals we have filed have been used against us. We had to redefine our legal strategy when we realised that anything we did was used to Virginia’s detriment. Clearly we were not dealing with legal decisions but purely political ones.

It is more than obvious that Virginia has been criminalised for being a FECI prosecutor. They couldn’t handle Sandoval, so as soon as they could, they came after her. This is a coordinated attack against Virginia. I have no other explanation than that it is revenge for having dared to question structural corruption.

Virginia has been sentenced to four years in prison. Evidently in Guatemala there is no rule of law. Criminal law is used as a weapon of political persecution. While I was defending several colleagues, I learned that complaints had also been filed against me, so I had to go to the Public Prosecutor’s Office to present evidence and take care of my own case, in addition to continuing to take care of those of my colleagues, so as not to be criminalised too.

What international support does Guatemala need to get back on track in the fight against corruption?

Neither I nor my colleagues believe in Guatemala’s justice system. I am afraid of being arrested and punished with imprisonment without any evidence or reason. We have no hope and we do not see an encouraging future. We see they are doing the same to journalists and other human rights defenders. There is no one who will fight for us, because anyone who support us may suffer reprisals. The media outlets that help us, for instance, are also criminalised. The outlook is tragic.

We need the appointment of independent judges. As long as Congress does not designate new courts, we have no guarantee of anything. We need support to continue our fight against corruption in coordination with civil society. Only in this way will we be able to bring state powers to account and ensure they respect our rights.

Civic space in Guatemala is rated ‘obstructed’ by the CIVICUS Monitor.