BUSINESS AND HUMAN RIGHTS: ‘This treaty should not be negotiated behind closed doors’ 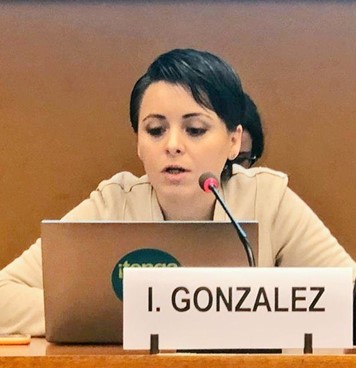 CIVICUS speaks about the process to develop an international treaty on business and human rights and the role of civil society with Ivette Gonzalez, Director of Strategic Liaison, Advocacy and Public Relations at Project on Organising, Development, Education and Research (PODER).

PODER is a regional civil society organisation (CSO) based in Mexico, dedicated to promoting corporate transparency and accountability in Latin America from a human rights perspective, and to strengthening civil society affected by business practices to act as guarantors of long-term accountability.

Why is a treaty on business and human rights so important?

We live in a world virtually ruled by capital. Since this hegemonic capitalist and patriarchal economic model has taken hold, it has become clear that whoever has the capital calls the shots.

When companies directly influence the decisions of state powers, be it the executive, legislative or judicial branches of government, or others such as international organisations or banking institutions that should operate for the public benefit, and instead put them at the service of the private and exclusive benefit of a few people and prioritise the creation and accumulation of wealth over human rights, it results in a phenomenon we call ‘corporate capture’. Corporate capture is observed on all continents and results in the weakening of the state and its institutions. The strength of the state needs to be restored and the treaty on business and human rights could contribute to this.

A legally binding international instrument to regulate, in international human rights law, the activities of transnational corporations and other business enterprises seeks to curb violations committed by companies of multiple human rights such as the rights to health, freedom, privacy and access to information and the impunity with which they operate, which allows them to destroy the environment, territories, families and entire communities.

All companies must operate with due diligence on human rights to identify, prevent, address and remedy abuses and violations, as a continuous cycle of management including project planning, investment, operations, mergers, value and supply chains, relationships with customers and suppliers, and any other activity that could cause negative impacts on rights and territories. The treaty serves as a means for states, as the primary duty bearers in charge of protecting human rights, to hold companies to their responsibilities and monitor compliance.

An international treaty would also be a unique development in that it would cover the extraterritorial activities of companies, such as the activities of companies that may be headquartered in a country in the global north but have operations in the global south. At the moment, in many instances and jurisdictions, companies are only self-regulating and are not accountable for their human rights abuses and violations, and the destruction they cause to life and the planet. Some states are making progress on regulations and policies, but there are still gaps at the international level. We want this treaty to address the huge gap in international law that allows corporate crimes to go unpunished.

What progress has been made in negotiating the treaty?

Interesting developments took place at the eighth session of the Open-ended Intergovernmental Working Group on Transnational Corporations and Other Business Enterprises with Respect to Human Rights, held from 24 to 28 October 2022. While there is no strict timeline or deadline for producing the final version of the treaty, one of the experts convened by the Intergovernmental Working Group for the development of the instrument proposed 2025 for concluding the negotiations. This is the deadline that is expected to be met if states have the political will to build consensus. For the time being, some states that were reluctant to participate in the past are now showing a little more interest.

For now, the draft has 24 articles, the first 13 of which were discussed in the last session. Discussions included central issues such as the definition of victims’ rights and their protection and the definition of the purpose and scope of the treaty: whether it should include only transnational corporations or other companies as well. The state of Mexico, for example, argues that this instrument should cover all activities that have a transnational character. There have also been discussions on the prevention of damages and access to reparations, as well as about legal liability, the jurisdiction that will deal with complaints, statutes of limitation and international judicial cooperation, among other issues.

Some states have made contributions to improve the content under negotiation. In contrast, other states seek to minimise the scope of the treaty in certain regards, such as protections for Indigenous peoples and communities, environmental safeguards and women’s and children’s rights, among others.

Some states support the most recent proposals of the chair rapporteur, the Ecuadorian ambassador, but a large part of civil society considers that, for the most part, they detract from what was achieved during the seven years up to 2021, and weaken the treaty. They promote power asymmetry between northern and southern states, as well as between companies and rights-holding individuals and communities. The third revised draft is the one we recognise as legitimate and the basis on which we believe negotiations should continue.

How is civil society contributing to the treaty process?

Dozens of CSOs are pushing for an effective treaty, including PODER, along with the International Network for Economic, Social and Cultural Rights (ESCR-Net), which brings together more than 280 CSOs, social movements and activists from 75 countries, and several other alliances, movements and coalitions such as the Treaty Alliance, Feminists for a Binding Treaty and the Global Campaign to Reclaim Peoples Sovereignty, Dismantle Corporate Power and Stop Impunity.

Of course there is diversity of opinion within civil society on a number of issues, but we all agree on the need to regulate business activity with a human rights perspective. We have identified the elements this treaty should contain and the conditions required for its implementation. And we are trying to inject urgency into the process, which is going too slowly, while human rights violations and attacks against human rights defenders do not stop, but instead increase every year.

Civil society has advocated with decision-makers to open up spaces for discussion with civil society. PODER, along with ESCR-Net, has in particular insisted on the constructive and proactive participation of states from the global south in the process, and specifically from Latin America. We also work to integrate a gender and intersectional perspective into both the process and the text. One example for this has been the proposal to use Mexico’s feminist foreign policy.

Civil society’s point of departure is the conviction that it is not possible to develop a legitimate treaty without placing the participation of rights holders – affected rural people and communities, Indigenous peoples, independent trade unions, LGBTQI+ people and people in vulnerable situations, among others – at the centre of the whole process.

What are the chances that the final version of the treaty will meet civil society’s expectations and fulfil its purpose?

We hope the treaty will contribute to ending corporate impunity and states will assume their obligation to protect human rights in the face of corporate activity. It will prevent abuses and violations, redress grievances and ensure these situations do not recur.

Although there are established processes for the development of international treaties, this is an unusual treaty and should be treated as such, and changes should be made to both process and content as necessary for it to be truly effective.

For it to fully meet the expectations of civil society would require a paradigm shift based on the principle that business has a social function and that its operations should not exceed certain limits for a dignified life and a clean, healthy and sustainable environment. We know that our full aspirations will not materialise with a treaty, with National Action Plans and regulations and standards, even if they are properly implemented. But these are all important steps in trying to balance the scales by limiting the power that the global economic system has given to business corporations.

While the treaty is unlikely to meet all our expectations, CSOs that are demanding the highest standards for this treaty will continue to do so until the end. We will continue to bring proposals from experts and affected communities and groups fighting for justice and redress for the harms they experience first-hand, opening up spaces for their voices to be heard and remain at the heart of the negotiations at all times, and including human rights and environmental defenders in consultations on the text.

This treaty should not be negotiated behind closed doors or with the private sector alone, as this would allow for the repetition of the same cycle of opacity and privilege that has brought us this far, and would only contribute to maintaining an unsustainable status quo.