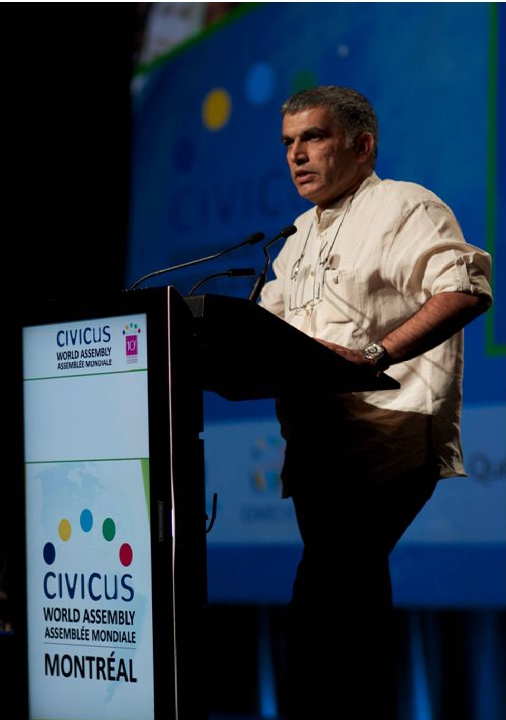 An arbitrary travel ban was placed on Nabeel Rajab in July and he remains unable to travel. The travel ban was imposed because the charges against him have not been formally closed and applications by his lawyers to do so have been ignored.

Nabeel Rajab, president of the Bahrain Centre for Human Rights (BCHR) and Director of Gulf Center for Human Rights, was detained on 1 October 2014 upon returning to Bahrain after an extensive international advocacy campaign to highlight on-going restrictions on fundamental freedoms in Bahrain.

Mr Rajab’s recent detention followed a written summons to appear before the Cyber Crimes Department of the Criminal Investigation Directorate. Following a brief investigation, Mr Rajab was arrested on suspicion of violating article 216 of the Bahrain Penal Code - which punishes offending public institutions - in relation to tweets he sent deemed critical of the government. On October 1st, public prosecutors ordered Mr Rajab’s detention for another 7 days pending further investigation.

CIVICUS remains deeply concerned that Nabeel Rajab’s most recent detention represents yet another flagrant attempt to silence the outspoken activist and further muzzle independent advocacy and reporting on Bahrain’s unabated crackdown on civil liberties and civil society freedoms. In the weeks prior to his arrest, Mr Rajab embarked on a two-month international tour including to the European Union and the 27th Session of the UN Human Rights Council in Geneva to advocate for greater respect for democratic freedoms in Bahrain.

Mr. Rajab previously served two years in prison for his role in the Bahrain peoples’ uprising which began in February 2011. Mr Rajab has been a vocal critic of the Bahraini government’s continued repression of civil and political rights in the country and has championed a number of human rights causes through his work as co-founder and president of BCHR.

In 2013, the United Nations Working Group on Arbitrary Detention issued a decision finding that Mr Rajab’s detention was arbitrary and violated his rights to freedom of expression and assembly under international law.

Background Information:
Mr Rajab was previously arrested on 5 May 2012 at Manama airport on charges of "insulting statutory bodies, participating in illegal demonstrations and inciting others to join.” While Mr Rajab was later released on bail on 20 May 2012, he was kept in detention on a further charge of "organizing illegal protests" until May 28 and placed under an international travel ban. Activists accused the Bahraini authorities of attempting to prevent Mr Rajab from participating in the protest movement through the use of arbitrary detention.

On 9 July 2012, Mr Rajab was arrested at his house by at least twelve security personnel. Hours later he was sentenced to three months in prison for a sending a tweet in which he criticized the prime minister. Mr Rajab was charged with "publicly vilifying the people of al-Muharraq and questioning their patriotism with disgraceful expressions posted via social networking websites."

While in detention, on 9 August 2012 Mr Rajab was sentenced to three years in prison for his role in the ongoing mass protest movement. Mr Rajab was accused of three charges including "involvement in illegal practices and inciting gatherings and calling for unauthorized marches through social networking sites", "participation in an illegal assembly", and "participation in an illegal gathering and calling for a march without prior notification."

On 24 May 2014, Mr Rajab was released from prison after spending over two years in prison for his role peaceful protests in February 2011.
Nabeel, was a keynote speaker at the CIVICUS World Assembly in 2011 and gave a powerful account of the systemic repression of protestors in Bahrain which resulted in serious injuries of hundreds of demonstrators and imprisonment of scores of human rights defenders through sham trials.

About the Bahrain Centre for Human Rights (BCHR):
The Bahrain Centre for Human Rights is non-profit, non-governmental organization which works to promote human rights in Bahrain.  Founded in 2002 by a number of Bahraini activists, the centre was given a dissolution order after its former president Abdulhadi Al Khawaia was arrested in September 2004. While the BCHR is still banned by the government, it remains active in the defence of human rights in Bahrain.