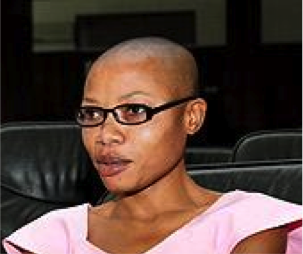 On 18 June 2014, Rwandan journalist Agnès Uwimana Nkusi was released from prison after completing a four-year sentence on spurious charges of defamation and harming state security motivated by her independent reporting.

On July 10 2010, Agnes Uwimana Nkusi and her colleague Ms. Saidati Mukakibibi were arrested following the publication of articles in the independent Kinyarwanda-language newspaper, Umurabyo (edited by Ms Uwimana), which criticized the Rwandan government and President Paul Kagame.

The Rwandan High Court charged both journalists with endangering national security, genocide denial, defamation of the President and divisionism (the issuing of statements that could be divisive and/or inflammatory). On February 4 2011, Ms Uwimana was sentenced to a total of 17 years imprisonment (with 5,10, 1 and 1 years for each of the charges, respectively), under the country’s vague and overly broad ‘genocide-ideology’ and sectarianism laws.

On April 5 2012, the Supreme Court cleared Ms Uwimana of the charges of genocide denial and divisionism, thereby reducing her sentence. However, the charges of defamation and endangering national security were upheld by the Court, leaving Ms Uwimana to serve out the remainder of her four year sentence.

On 3 March 2014, Tunisian cartoonist, Jabeur Mejri was released from prison following nearly two years in prison for publishing cartoons of the prophet Muhammad  on his Facebook page.

Reason Behind Bars:
Mr. Jabeur Mejri was arrested on 5 March 2012, after two lawyers in the eastern coastal city of Mahdia filed a a complaint against him in connection with his online posts, which included ‘nude’ cartoons of the prophet Muhammad. On 28 March 2012, a primary court ruled that his posts were insulting to Islam, and a threat to“public order” and morality. Merji was later sentenced to seven and half years in prison – the maximum punishment for each of the charges – along with a fine of1200 Tunisian Dinars (around $800 USD).  On 25 April 2013, the Court of Cassation upheld Mejri’s sentence and ordered that he complete the remaining 6 years of his sentence.

According to Mejri’s lawyer, Mejri was tortured during his interrogation and was later attacked on several occasions by other inmates inside the prison once the news that he had ‘insulted Islam’ had spread.  His family has described him as ‘emotionally tired’ from what they insist is unjust imprisonment. Merji’s sister told Amnesty International: “Jabeur is worried and depressed because he has been in prison for a year now, and he feels that he has been forgotten.”

Update:
On 15 March 2013, Cambodian activist Mam Sonando was released from prison after an appeals court in the capital Phnom Penh overturned his conviction on anti-state charges, along with his 20-year jail sentence.  Sonando was instead given a five-year suspended sentence on charges relating to his involvement in the Kratié unrest.  The decision has been lauded by human rights groups as a positive step for freedom of expression in the country.

While CIVICUS welcomes the release of Mam Sonando, we urge the Cambodian to cease all judicial harassment of civil society activists and ensure that the fundamental rights of all its human rights defenders are  fully respected.

Reason behind bars: 72 year old French-Cambodian Mam Sonando, the head of Beehive Radio and founder of Cambodia’s Democrat Association, was arrested on 15 July 2012 in connection with an alleged secessionist plot. 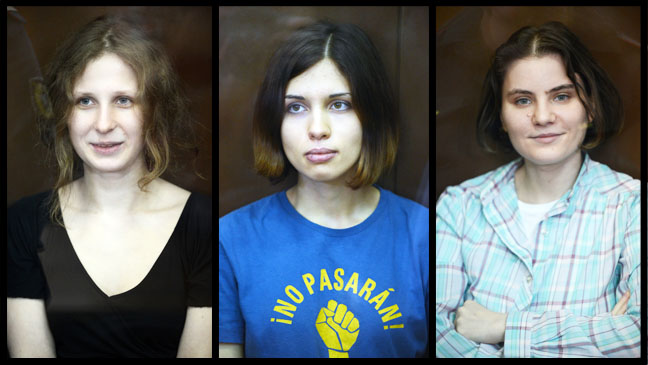 On 23 December 2013, two members of the Russian punk band Pussy Riot, Maria Alyokhina and Nadezhda Tolokonnikova, were released from prison under an amnesty by President Putin after serving nearly two years in prison for a public performance critical of the government.

They were accused of playing a ‘Punk Prayer’ in Moscow's main Orthodox cathedral with four other women in the band in February 2012. In March they were arrested by the Moscow police, for 'hooliganism on grounds of religious hatred'. After nearly six months in detention the three women were sentenced in August to two years in prison penal colony.

In October 2012 Ekaterina Samutsevich was freed on appeal. The judgement ruled that she had not performed the 'punk protest' near the altar of Moscow's Christ the Saviour Cathedral because she had been stopped and led away by the police before it took place.

Maria Alekhina and Nadezhda Tolokonnikova continue to serve their time in Siberian prison camps in Perm and Mordovia respectively. Both have a young child and are far away from their homes. Since losing her appeal in late May, Maria Alekhina has complained of death threats from other inmates and ill treatment from prison officials. After seven days of hunger-strike in protest against her vicious treatment, Ms. Alekhina was hospitalised. 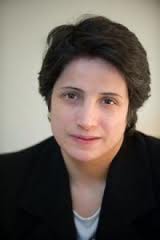 Update:
Nasrin Sotoudeh was released from prison along with at least ten prisoners of conscience on 18 September 2013. While the decision to release Narsin represents a welcome step in the right direction, the government has yet to revoke the unwarranted ban preventing Nasrin from practising law and from leaving Iran for 20 years.

Nasrin Sotoudeh was arrested on 4 September 2010.   She was detained for four months without any formal charges, held in solitary confinement, and subsequently charged with “acting against national security,” “propaganda against the regime” and being a “member of the Centre for Human Rights Defenders.” Tehran’s Revolutionary Court sentenced her to 11 years in prison in January 2011, which was commuted to 6 years in September 2011.  The presiding judge further banned Ms Sotoudeh from practising law and from leaving Iran for 20 years.

The charges against Ms Sotoudeh relate directly to her work as a human rights lawyer.  Ms Sotoudeh is widely recognised for her defence of high profile activists (including Shirin Ebadi, the 2003 Nobel Peace Laureate) and juveniles, particularly those facing the death penalty.

While Nasrin Sotoudeh was released on furlough from Evin prison in Tehran in January and June 2013 to visit her family, she remains in custody serving out her six-year prison sentence which began in September 2010.

Evgeniy Zhovtis was finally released from jail on 17 February 2012 after a court decision made on 1 February 2012, granting amnesty to him was enforced. The amnesty was initially proclaimed by President Nursultan Nazarbayev on 28 December 2011 as the country marked 20 years of independence. The amnesty covered certain categories of individuals charged and or convicted for crimes considered to be of low or medium severity and Evgeniy’s case fell under this category.

Evgeniy Zhovtis who is the founder of the Kazakhstan’s International Bureau for Human Rights and Rule of Law was accused of “manslaughter” in 2009 following an incident in which he accidentally knocked down a pedestrian while driving at night on the highway.  He was convicted  of “violating traffic regulations which caused the death of a person” and sentenced to four years in jail in September 2009 in what was clearly a politically motivated trial and a form of retribution for his criticism of the human rights record of Kazakhstan. He was also banned from driving for a period of three years. The trial was full of procedural flaws and the judge in question chose to disregard crucial evidence presented by Mr.  Zhovtis’s lawyers at the trial. The court only allowed witnesses presented by the prosecution to provide evidence and testify during the trial.  Even though the defence pleaded with the court to allow independent experts to testify in the case, the judge rejected such pleas.   In 2010 and appeal filed in by the defence was rejected.

CIVICUS welcomes the release of Evgeniy Zhovtis but reminds the authorities in Kazakhstan to respect the fundamental rights of its citizens including the rights to free speech and association.

Belarusian civil society activist, Ales Bialiatski, was freed from prison on 21 June 2014 after spending almost three years in prison due to his peaceful human rights activities.

At the Organization for Security and Co-operation (OSCE) Parliamentary Assembly’s 22nd Annual Session held from 29 June to 3 July 2013, the OSCE Committee on Democracy, Human Rights and Humanitarian Questions called for the release of all political prisoners in Belarus, including Ales Bialiatski. This followed the 21 December 2012 decision by theUnited Nations Working Group on Arbitrary Detention (WGAD) which found that Mr. Ales Bialiatski had been arbitrarily detained.

Further to this, the WGAD stated that “the adequate remedy is to release Mr. Bialatski and accord him an enforceable right to compensation pursuant to article 9, paragraph 5, of the [ICCPR]” and went on to emphasis the fact that States party to the ICCPR were “not only under a negative obligation not to interfere with the founding of associations or their activities, but also under a positive obligation to ensure and provide […] measures such as facilitating associations’ tasks by public funding or allowing tax exemptions for funding received from outside the country”.