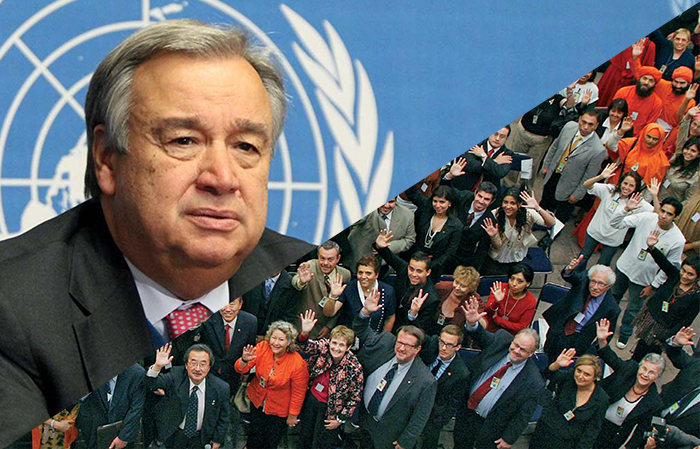 Civil society advocates from around the world are urging newly appointed UN Secretary-General António Guterres to be a champion for civil society and to take concrete steps to build a more inclusive UN.

The United Nations Association - UK, the Friedrich-Ebert-Stiftung New York Office, CIVICUS and Avaaz, four of the founding members of the 1 for 7 Billion campaign, have collected a range of proposals from its global network of civil society organisations.

Challenging Mr Guterres to pursue his pledge to make cooperation with civil society "a key element in solving global problems", the series of articles offers solutions for a fairer, more inclusive UN across a range of processes and programmes.

At the heart of the publication is a common message for António Guterres to build a more inclusive UN.

Introduction - civil society and the UN

Open letter to Mr Guterres from 1 for 7 Billion

Overcoming the Politics of the UN’s NGO Committee
Eleanor Openshaw

Inclusiveness Is the Key to Implementing the SDGs
Farooq Ullah

Online & on the Ground: Connecting Those Most in Need with the UN
Aya Chebbi

Persons with Disabilities and the United Nations System
Vladimir Cuk

Supporting Civil Society across the UN System and Beyond
Ben Donaldson

The adopted resolution on promotion and protection of all human right, civil political, economic, social and cultural rights, including the right to development.

CIVICUS statement to the HRC on International Women's Day

CIVICUS wishes to thank you for commemorating this day and for letting us re-live the celebration of “The Power of Empowered Women.” For one who has participated at the Vienna Conference it still rings in the ear: Women Rights are Human Rights. The World Conference coined this milestone recognition and initiated a visibility process for the rights of women that run through the Beijing Conference into the many mechanism we have today, foremost CEDAW, including UN Women, the item on this Council’s agenda and today’s worldwide celebration. It seems we have come a long way.

Hélas, we are also aware that only a few weeks ago the courageous campaign of “A Billion Rise” had to mobilise the world against violence against women, still so rampant in our world today and we are far from Vienna’s call that the equal enjoyment by women of all human rights be a priority for governments and the United Nations.

Universality and indivisibility of all human rights: the freedom from want and fear the most important legacy of the Vienna conference, is still far from realisation for many women around the world. The famous glass ceiling in so many sectors also hinders women from fulfilling their potential and contributing to their own countries’ economic, social and cultural development.

To mark International Women's Day 2013, CIVICUS has looked at the role of women in civil society. The history of civic engagement would not be the same without women's participation. Women campaigners, community leaders, activists and bloggers have led the way in fighting for equality and justice across the world. However, our analysis shows that civil society as a sector has a long way to go to achieve gender equality at the top. In fact, given how prevalent women are in the not-for-profit sector, the glass ceiling at the top of civil society organisations looks more like a glass pyramid.

CIVICUS has committed to start a long term discussion about the role of women in this sector. As a global alliance of civil society, we want to know how our sector can 'walk the talk' on gender equality.

Thank you for your attention

CIVICUS wishes to thank the panelists for this great debate. For one who has participated at the World Conference it still rings in the ear, Women Rights are Human Rights. When the then Centre for Human Rights had received a petition with more than a million signatures, the World Conference coined this phrase in recognition of this milestone and initiated a visibility process for the rights of women that ran through the Beijing Conference into the many mechanisms we have today, foremost CEDAW, including UN Women, the item on this Council's agenda and tomorrow's great panel on "the Power of Empowered Women".

Hélas, we are also aware that only a few days ago the courageous campaign of "A Billion Rise" had to mobilize the world against violence against women, still so rampant in our world today and we are far from Vienna's call that the equal enjoyment by women of all human rights be a priority for Governments and the United Nations.

The so strongly reiterated confirmation of universality and indivisibility of all human rights, the freedom from want and fear, is really the most important legacy of the Vienna conference, but is also still short of realisation in many parts of the world.

However, the most effective outcome has been the creation of the High Commissioner for Human Rights. The incumbent and predecessors and their Office have vastly increased the promotion and protection of human rights, the understanding of a culture of human rights as a "common language of humanity". OHCHR only needs to be more resourced to meet the expectations of millions around the world and the ever growing workload.

Mr. President, human rights are both universal and also historically defined and evolving. Whilst we are watching today people crying out for dignity and democratisation and are witnessing a global paradigm shift towards a world view that includes participatory democracy, CIVICUS would like to ask the panelists how they see this development, participatory democracy, to help overcome the conflict between "identity" and "otherness" , how it could marry universality with specificity?

Thank you for your attention

This joint submission by CIVICUS: World Alliance for Citizen Participation and the Center for  National and International Studies (CNIS) outlines concerns related to the environment in which civil society organisations and human rights defenders operate in Azerbaijan, and discusses threats they face in the exercise of the freedoms of expression, association and assembly. CIVICUS and CNIS are concerned by persistent harassment, intimidation and attacks against independent journalists, human rights defenders and political activists by state agents. Civil society organisations (CSOs) and media houses have also had to face various forms of bureaucratic harassment for their criticism of the government.

Report of High Commissioner on Belarus

Mme High Commissioner, CIVICUS: World Alliance for Citizen Participation welcomes your comprehensive report. The human rights situation in Belarus has deteriorated since the adoption of resolution 17/24 in June 2011. CIVICUS is deeply concerned about the situation of human rights defenders, particularly those held in detention. We urge Belarus immediately and unconditionally to release all political prisoners in Belarus, including human rights activist Ales Bialiatski, held on trumped up charges, and on whom most recently new and unlawful restrictive measures have been imposed to worsen his condition.

We regret to hear about numerous other cases of torture and humiliating verbal and physical abuses in overcrowded prisons, particularly in pre-trial detention. CIVICUS raises awareness that, to date, Belarus has not criminalised torture and has not signed and ratified the Optional Protocol that provides preventive measures and allows independent international and national bodies to undertake visits to the country.

Madame High Commissioner, CVICUS welcomes your annual report. Once again we laud your audacity to speak up whenever gross abuses of Human Rights occur and capacity to stand by those who are in the frontline of engagement. We share your deep concern over the degrading security situation of Human Rights defenders and civil society activists in countries where violence remains the norm. We thus applaud your swift response in sending specifically mandated missions to Tunisia and Egypt, Yemen, Afghanistan and Sudan and we commend your sustained efforts to fight impunity and promote accountability, strengthen UN Human Rights mechanisms and treaty bodies.
Read more Annual Report of the High Commissioner for Human Rights Interactive Debate

Limited information and awareness of the notorious violations of human rights in Turkmenistan and Uzbekistan reaches the international community. To combat this, CIVICUS recently helped to support local civil society representatives to visit the UN in Geneva and get their voices heard. Read Will Lasky's, CIVICUS Eurasia Project Coordinator, report from the trip on the CIVICUS Blog and download their Report to UN Special Procedures on Violations of Freedom of Expression and Freedom of the Media in Turkmenistan and Uzbekistan.